Kashmiri Pandits Threatened, Warn of Fresh Exodus; Destination BJP for Defectors; Coping with Copenhagen; and How to Harass a Man Who Volunteers Info 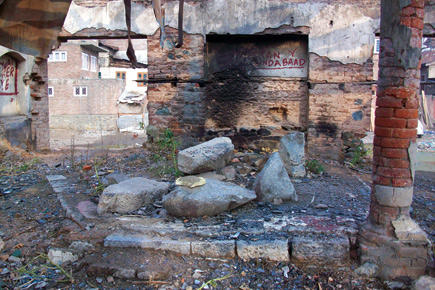 Kashmiri Pandits Threatened, Warn of Fresh Exodus; Destination BJP for Defectors; Coping with Copenhagen; and How to Harass a Man Who Volunteers Info

The Centre’s efforts to send Kashmiri Pandits back to the Valley received a setback after some of them were threatened inside a temple. On 15 November, a group of Kashmiri Pandits had gone to a temple located on the outskirts of Srinagar, to document the damage done to the complex for future restoration. Soon after, a group of  young Muslim men arrived and threatened them while locals stood around nearby, without intervening.

According to Sanjay K  Tickoo, a representative of the handful of Kashmiri Pandits who braved militant threats in 1989-90 and chose to stay behind, they were warned that their fate would be like that of the damaged temple. Tickoo recounts, “The men said, ‘Jis tarah humne tumhare mandiro ko jalaya hai vaise hi tum logon ko jalayenge, aur kisi ko pata bi nahi chalega. Yahan sirf Islam chalega. India ko lagta hai ki tum logon ko vaapas layega; jo bhi aayega maara jaayega, hum log phir se gun uthayenge.’ (We will burn you in the same manner that we have burnt your temples and no one will ever come to know. Only Islam shall prevail here. India thinks it can bring you people back. Whosoever will come here will die. We will pick up the gun again).”

He has written a letter to the Prime Minister, Chief Minister and to moderate separatist groups of the Valley requesting the state and the Centre to ‘re-think about their proposal to bring back the Kashmiri Pandits to the Valley…  Instead, they should be prepared to register the fresh lot of migrants who will leave the Valley in the coming days if the situation is not taken care of in due course of time’.

“There is some resentment among certain sections of the majority community about Kashmiri Pandits returning to the Valley,” says Tickoo. “If we cannot protect our temples now, then why stay here? We should also leave.”

The visuals posted after this life sentence was handed down are cruelly ironical. Alex W, a 28-year-old ethnic German and self-confessed xenophobe, who murdered an Egyptian woman in a German court in July, after a fight where he tried to rip off her Islamic headscarf, was led out of court with his face covered almost as if he was in burkha.

Marwa el Sherbini, known as the headscarf martyr, was pregnant when Alex W stabbed her to death in front of her 4-year-old son, her husband and the judge. Due to the severity of the crime and his professed xenophobia, the Dresden court has ruled that Alex W would have no chance of parole.

This is a pair of Lodhs who could usher in another round of political realignments in Uttar Pradesh. Having failed to win votes from his own, the ‘backward’ Lodh caste for the Samajwadi Party, former UP Chief Minister and two-time BJP-quitter Kalyan Singh could be back in his parent party. While Singh has been seen cosying up to BJP leaders, so has former Madhya Pradesh Chief Minister Uma Bharti. Bharti is also a Lodh and though she says she doesn’t want to merge her version of the BJP —the Bharatiya Janashakti Party—into her parent party, she is keen on joining the National Democratic Alliance (NDA). She has written to NDA Convenor Sharad Yadav and LK Advani asking to join the NDA fold “because it is hard to carry on politics at the national level single-handedly”.  Kalyan, after being unceremoniously dumped by Mulayam Singh, is back to chanting “Ram mandir” and Bharti who met Kalyan in Lucknow says she will support Kalyan in his support of the BJP. That is a chain reaction that the BJP is hoping will resurrect its falling fortunes in the state it once ruled.

Meetings of fancy multilateral fora are, at the end of the day, a big bash on taxpayers’ money. The dinner menu at the Food and Agriculture Organisation’s annual meeting at Rome, to discuss global grain shortage, is said to be legendary. Caviar and truffles and the best French wine, not to mention occasional slivers of Kobe beef, are on offer.

Nothing however will match the Copenhagen climate party next month in sheer brazenness.

Now, Denmark can get really cold at this time of the year. The average December temperature hovers between zero and four degree centigrade. The heating requirements for the estimated 25,000 attendees alone will likely add a bit to the warming of the globe. And why so many people?

The answer is travelling on the gravy train of NGOs. Global warming is the new Aids. All you need is a desk, a chair and a telephone, and presto, the warm feel of greenbacks will propel you to Copenhagen and beyond.

And how will all these NGOs and government types reach Copenhagen? By air, of course. It’s another matter that the airline industry  contributes 2 per cent of all emissions that lead to global warming.  The UN will spend about $2 million on the picnic, but the real spending will be in the millions of dollars that may come from powerful countries to push the promise that they will not cut emissions but the poor should be burdened with the responsibility of keeping the environment clean.

Already ‘experts’ are linking everything from the disappearance of the one-horned rhino to pasta shortages in Italy with global warming. The day is not far when, if you miss a deadline at work, global warming can be the excuse.

What will all this achieve? After spending millions of dollars and polluting the earth with all the energy guzzled at the summit, all indications are that it will achieve absolutely nothing. The US has decided to play hardball and force poor countries to accept cuts in their economic growth. China or India or Brazil have not given any assurance on verifiable cuts in their emissions. So if you have a passport, just get a card printed. Use the following words in bold: ‘Advocacy on climate change, sustainable development and greenhouse gases.’ And call your travel agent.

How To Harass a Man Who Volunteers Info

Bollywood director Mahesh Bhatt has now written to Prime Minister Manmohan Singh. He wants the Prime Minister to intervene. Since Bhatt’s son Rahul was named as a friend of Lashkar operative David Headley, the Bollywood director says his family is under threat of a different sort. Cinemas where his films are being screened have been attacked and his son can’t leave home.

Even then, one would say why petition the Prime Minister of the country? The matter could have been dealt effectively by the local police.

But the establishment, it seems, has left Bhatt with little choice: the family volunteered information and approached the police. The police, on their part, casually leaked out Rahul’s name and suddenly it was all over the place in the media.

At a time when the country is talking of putting together a strong witness protection programme, this is what the authorities have doled out to someone who has come forward. After the Bhatts claimed to the press that they had been given a clean chit by investigators, Home Secretary GK Pillai said in New Delhi that no clean chit had been given to anyone and investigations are still on. So what else can Bhatt do than write to the bureaucrat’s boss —the Home Minister —or better still, the Prime Minister? If the man is involved or suspect, he needs to be investigated and booked. But, by making his name public and then issuing statements at the highest level countering his claims really doesn’t help investigations. Neither does it help in building confidence among people without whose support the war against terror cannot be won.