In Mizoram, the Omen

Seven thousand fanatical Christians have boycotted the census because they believe Nilekani’s unique identification project is Satan’s plan to rule the world. 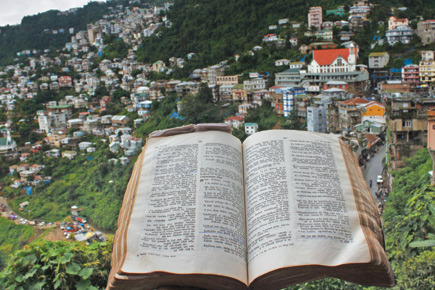 Seven thousand fanatical Christians have boycotted the census because they believe the unique identification project is Satan’s plan to rule the world.


And he causeth all, both small and great, rich and poor, free and bond, to receive a mark in their right hand, or in their foreheads: and that no man might buy or sell, save he that had the mark, or the name of the beast, or the number of his name — Revelation 13:16-17

Kaptawni, a 44-year-old widow who sells second-hand clothes in Aizawl, looks at me with suspicion. “Why does he want to know all these details about me and my family? Is he trying to trick me?” she asks Zodin, the translator. Zodin tries to convince her that I am who I am—a journalist—but Kaptawni is not mollified. I know exactly what she is thinking: am I an agent of the Devil?

Kaptawni is one of the 7,000-odd people in Mizoram who have refused to get themselves enumerated in the census. They are all ultra-orthodox Christians to whom the Unique Identification (UID) card project, a part of the census this time, means a plan by Satan to give humans the ‘Mark of the Beast’ as foretold in the New Testament’s ‘Revelations’ chapter. “The UID card is the first step. Soon, the Government will say that since it can be lost or forged, chips must be implanted in our foreheads or arms. That is what the Bible says will be the Mark of the Beast,” she tells me. My questions make her angry, but it is when we want to shoot her photo that she decides her suspicions are true. “No photographs,” she declares and ends the interview.

The census enumeration started in this deeply religious and overwhelmingly Christian state on 15 May. Soon, a rumour began to float that the UID project heralds the Beast’s rule with everyone receiving a “mark on their right hands or on their foreheads” and without which “no one may buy or sell, save he that had the mark…” The UID, like a US social security number , will at some point be the mark of an Indian, but to Mizoram’s ultra-orthodox Christians it concurs with this line of Revelations: ‘…before the end comes, the number and symbol of the beast or Satan would be distributed to mankind and everybody would be counted by the prince of darkness.’

T Pachhinga isn’t as unreasonable as Kaptawni. The 73-year-old former constable with the Railway Protection Force is willing to talk, and is even ready for a photo. “The UID card will mark us for the Beast. The Bible says that whosoever is thus marked will burn in hell,” he says. Pachhinga belongs to the Presbyterian Church where no one else, including his wife and three adult children, agrees with him. “They don’t understand,” he says. “I know I won’t get the UID card. Maybe I won’t be able to do many things, like bank transactions, draw my pension, get medical treatment or even book a railway ticket. But I’m willing to bear the consequences. I’ve transferred everything in my wife’s name so that my family doesn’t suffer. I’m ready to suffer. I know the Lord will save me.” Pachhinga has a repertoire of Biblical verses to back him. For instance, Revelations chapter 14, verses 9 to 11, which warn against receiving the Beast’s mark.

Kapzuala, 46, an evangelist with the Church of God, another local Protestant denomination, says he’s fine with the census but not the UID project. “I’m opposed to giving my biometric details and being given a number,” he says. He has a voter’s ID card. Doesn’t that also have a number? “The two are different,” he tells me, but refuses to explain why.

We travel to Kolasib, 100 km north of Aizawl, to meet Hmingropuia. He is a leader of the group campaigning against the UID project. He’s not opposing it in its entirety. “My only objection is to the allocation of numbers to those who are enrolled or enumerated. That is the number of the Beast,” he says. Hmingropuia used to be a primary school teacher, but drives an auto-rickshaw now. He has a driving licence which has a number, but that is alright. “The UID card will be a multi-purpose card,” he says. “It will be necessary to buy and sell property, just as is said in the Bible. Also, the UID project is part of a global exercise to enumerate people and households—the UN’s World Population & Housing Census. This is exactly what the Revelation says about the number or symbol of the beast being distributed to mankind and everybody being counted by the prince of darkness.”

Most Christians in Mizoram find this ridiculous. “They’re fanatical Christians with extreme views. They don’t understand the Bible and the Prophecies at all,” says former Minister Rokamloua, a church elder of the Dawrpui Presbyterian Church at Aizawl. C Lalnuntlinga, editor of Christian Outlook, a non-denominational religious monthly published from Aizawl, has carried articles against these rumours. He says, “Good and true Christians have nothing to fear from the Beast or Satan. There’s no danger to them.” Professor C Nunthara, vice-chancellor of the Shillong campus of William Carey University, has also written against it. “There is absolutely no connection between the UID Project and Biblical prophecies. I have explained that repeatedly in articles,” he says. The Presbyterian Synod issued a statement on the same lines. Church elders and pastors have tried speaking sense and the Government has held seminars to clear misconceptions, but it has not helped.

Strangely, while it is believed the UID is Satan’s project, the Beast by logical extension is not the Indian Government. “It could be the US or UN or some other very powerful entity,” Hmingropuia says. “Both are globally powerful and influential. The Bible says Satan would be a powerful king who rules over the world.”

“How about China, an emerging global superpower?” I ask him.  “Very likely,” he says, warming up to the idea.

Then he sees the camera and his mood turns agitative. We try to cajole him into a photograph, but he won’t even be clicked from the back. Abruptly, he starts talking of his past. “I used to drink a lot and was a street fighter till six years ago. I bashed up many people and was also behind bars.” It’s a loud hint which we take—and leave.