“I am Narendra Modi’s Wife”

In a poor village, the woman who is believed to be the estranged wife of the most powerful man in Gujarat lives in a one-room home 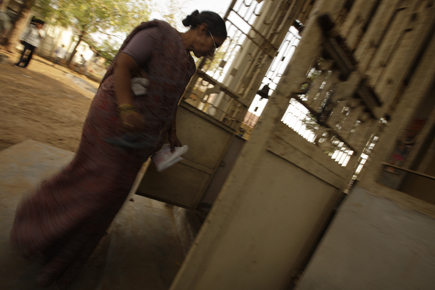 
She is clad in an ill-fitting blouse and a mod­est printed sari. Somewhat stooped, her face is wrinkled, her hands have obviously seen hard times and her hair is pulled back in a tight bun, making her look severe. Dirt grips the cracks of her slipper-clad feet. She could have been any woman in Rajosana village, Gujarat. But then, she is Jashodaben Chimanlal Modi. Everyone in this village knows her as Narendra Modi’s wife.

After the post-Godhra Gujarat riots, Modi’s po­litical foes in Banaskantha district discovered her in this dusty village. Since then, Jashodaben has lived her life under intense scrutiny. Few among the 2,500 villagers, predominantly Muslim, dis­believe her story. Even Modi has neither con­firmed nor denied her muted claim. At the time of going to press, a faxed request for a comment was not returned by Modi’s office.

People close to her say that she was married to Modi in his native village, Vadnagar, in Mehsana district, when she was 18. At the time of her mar­riage, she had studied only up to Class VII. That is believed to have put a strain on their marriage. (Also, according to a villager, Jashodaben does not like to be photographed as she believes she is not good looking.) A few days after the mar­riage, Jashodaben was sent back to her father Chimanlal’s house to complete her education. As those who know her say, in a bid to please her husband and measure up to his exacting stand­ards, she started studying in Dholaka and com­pleted her SSC (old pattern) in 1972. Then she completed a primary teachers course and worked in Ahmedabad for three months.

Subsequently, on 23 March 1978, Jashodaben joined a primary school in Dekwali village in Banaskantha district. She was later transferred to the District Panchayat School in Roopal village where she worked for 12 years. On 2 December 1991, she came to Rajosana village, where she currently lives. Villagers say that though she has been to Ahmedabad occasionally, she was never asked to stay on by her husband.

Jashodaben, a first standard teacher at the Rajosana Primary School, is very popular among her Muslim students. Muslim women in the vil­lage, none of whom were willing to be quoted, say that Modi’s estranged wife is shaping the per­sonalities of Muslim children through her dili­gence as a teacher. They seem to like her. But the 57-year-old will be retiring in October.

“Narendrabhai Modi is a national leader. He is intelligent and good looking. Jashodaben may not be able to match him. But she is his wife; he has married her. He must take her back to live with him,” says a village elder.

When I met her at the school, Jashodaben was as excited as a child and could not stop smiling. She expressed a desire to talk and tell her tale. But the principal of the school, Pravinkumar P Vyas, admonished her for talking to a journalist. “You will only talk to them after school hours. Now go back to your class,” Vyas told her.

She pleaded, “Can I talk to her during the break? It will only take a few minutes.” But the principal was unrelenting.

She left the room meekly, only to come back soon. She said,“I will not say anything against my husband. He is very powerful. This job is all I have to survive. I am afraid of the consequences.” She then went back to her classroom.

Meanwhile, the principal had made a call from his mobile phone to inform somebody that Jashodaben had visitors. He then went to meet her in her classroom. After that, she became a dif­ferent person. She smiled no more, her excite­ment was gone and she looked nervous. She kept wringing her hands. When I approached her again, she screamed, asking to be left alone. But as she walked away, she gestured to suggest that she would talk later.

Later, some men visited the school, one after the other, in different vehicles. They parked their vehicles within the school premises, and looked directly into the principal’s office. After a while, they left. When the school day came to an end, Jashodaben almost ran out to a waiting autorick­shaw. She pointed at me and told some villagers that I was harassing her.

Hiding her face in her hands, she went to her brother’s house in her maternal village in Brahamanwada, about 20 km away. A few min­utes later, a young man who identified himself as Prakashbhai, a reporter from Ram Setu (a two-page government-run newspaper printed with inconsistent frequency), approached me and asked me to leave the village. By then a sizeable crowd had gathered around us.

Though Jashodaben earns a monthly salary of Rs 10,000, she lives in a one-room tenement in the Panchalvas area in the village, and pays a rent of Rs 150 every month. The 100 sq ft room has a tin roof, no toilets, and not even a bathroom. The tap is located outside the house. According to the vil­lagers, Jashodaben wakes up very early and takes a bath outside the house.

Despite the fact that she can afford a better life, she has chosen to stay in a somewhat im­poverished village, in a sympathetic and help­ful neighbourhood. Here, her story is known to all. Even the children of her school refer to her as ‘Narendrabhai Modi’s wife’.

But for all practical purposes, that means lit­tle. Jashodaben does not enjoy any privileges. She has to sweep and clean her house, fill water, use a public toilet, cook her meals and wash her own clothes. She does not have any domestic help.

The moment a car is spotted in the village, those living in the bylane leading to Jashodaben’s house gather outside their homes and maintain a close watch on her. Everyone I met claimed to be close to her. In fact, some even asked for money to ensure good access to her. Every Sunday, she takes the 20 km ride to Brahmanwada in an autorick­shaw to spend the day with her brother’s family. Her brother runs a provision store.
People close to her say that she longs for that phone call from her husband, the call asking her to come and live with him forever. Jashodaben has consulted numerous astrologers for this rea­son. Interestingly, the verdict of all the astrolo­gers is that one day she will definitely live with her husband.

The war between the BJP and Congress in Gujarat, particularly in Rajosana, works in Jashodaben’s favour. Her story will be retold over and over again.

For many years, the Congress had an upper hand in the Panchayat elections, but of late, the BJP is emerging stronger here. So, while Modi’s supporters maintain a close watch on Jashodaben’s activities to ensure that her dis­closures do not embarrass the Chief Minister of Gujarat, his opponents are keen to reveal her to the nation. Meanwhile, Jashodaben is noticed to be turning increasingly religious.