How Modi Paid the Bills

Or how the Prime Minister won new friends and influenced old rivals for the passage of crucial legislations. The inside story 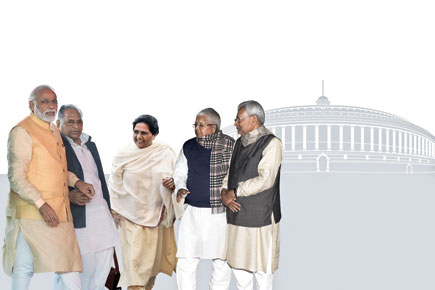 It was not photoshopped political camaraderie. The selfie frozen for posterity in his smart phone by Uttar Pradesh strongman and Samajwadi Party chief Mulayam Singh Yadav’s younger son was real—even historic in retrospect. It framed a beaming Prateek, sibling to state Chief Minister Akhilesh Yadav, and his wife flanking a cheerful Prime Minister Narendra Modi. The venue was Saifai, the Yadav clan’s hometown. The date was 21 February. And the occasion was the lavish pre-wedding tilak ceremony of MP Tej Pratap Singh Yadav, Mulayam Singh’s grandnephew, to Raj Lakshmi, daughter of another political stalwart, former Bihar Chief Minister and RJD chief Lalu Prasad.

To be sure, there’s no love lost between Mulayam Singh Yadav and Modi. Both Yadav and Lalu Prasad have been allies of the Congress in countering the BJP in their home states and in Parliament. And Yadav could not have forgotten Modi’s barbs last year during the Lok Sabha campaign at the ‘baap-bete ki sarkaar’ (father-son regime) of Uttar Pradesh, outlining the state’s gross laxity in law-and-order and its widespread corruption. The fact that BJP, in a campaign led by Modi and engineered by Amit Shah, won 71 seats in UP had only worsened matters.

But at Saifai, a different sort of scenario was unfurling, one that would prove to be an impressive opening act to one of the most successful Parliament sessions in recent memory. And then there was the visual that went viral: a shoulder-to-shoulder trio of the two Yadav chieftains posing with the Prime Minister at the wedding of Lalu’s daughter in Delhi. Early indications that some sort of ‘agreement’ was in the offing between the BJP and the SP emerged after Mulayam Singh Yadav’s invitation to Modi for the Saifai ceremony and his fulsome praise of the Railway Budget.

Known for the acerbic jibes he aimed at political opponents throughout the Lok Sabha campaign, Modi has of late been on a charm offensive aimed at securing much-needed friends in Parliament to push crucial reform bills through in the Budget session. While the passage of the bills could be a shoo-in in the Lower House thanks to the NDA’s overwhelming strength there, it was difficult in the Upper House, where the ruling alliance is in a minority. The NDA has 59 seats in the Rajya Sabha (BJP has 47 on its own), while the Congress has 68 and ally NCP six .

At an all-party meeting just prior to the session, and several hours after the Saifai spectacle, Modi urged leaders of other political parties to “fully cooperate” with the treasury benches in passing the key pending bills “in the interest of the nation”, as he put it. To get the NDA’s legislation final parliamentary approval, the pragmatic Prime Minister was only too aware of how critically his party needed the support of Mulayam Singh, whose SP has 15 seats in the Rajya Sabha (even if only five in the Lok Sabha, all of them family members, including daughter-in-law Dimple Yadav from Kannauj, which had set off speculation over an ‘understanding’ with archrival BJP during the General Election).

Mayawati’s BSP may have won no seats in the Lok Sabha polls, but it has as many as 10 Rajya Sabha MPs. The ruling party’s political managers were working on the eventuality that should it come down to a House vote on key bills, these parties could help the Government by either abstaining or staging a walkout in apparent opposition (both well-worn tactics to help push through a ‘politically difficult’ piece of legislation).

In order to prevent the Budget session from turning into a repeat of the previous winter session in the Rajya Sabha, Modi was aware that he would have to pull out all stops and woo Congress allies. A slew of subsequent ordinances by a bullish Government had already stirred the opposition. Worse, in contrast to the winter session, where he still had the upper hand on the strength of his party’s outstanding show in the Lok Sabha polls, Modi was going into the Budget session after his party had just got a drubbing in Delhi’s Assembly election.

The Prime Minister and others in his team who oversaw the Delhi campaign had also invited criticism for their time spent away from the job of governance at the Centre. All of that had given sharper teeth to opposition parties, and the BJP was expecting the passage of its bills to be anything but smooth. Modi was keenly aware that his Government had to start delivering on reforms for a revival of economic growth and to increase in foreign investment. A change of strategy was in order.

It was as part of his new strategy that Modi despatched Parliamentary Affairs Minister Venkaiah Naidu to soften the opposition of Congress President Sonia Gandhi before the session began. Next, the Prime Minister went to the extent of personally greeting Sonia Gandhi, her floor leader in the Lok Sabha Mallikarjun Kharge, Mulayam Singh Yadav and Biju Janata Dal leader Bartruhari Mahtab. He took a trip to Baramati, the bastion of NCP chief Sharad Pawar, whom he had dubbed the country’s ‘most corrupt’ during the Lok Sabha campaign, to forge a new friendship with the Maratha strongman. And when TMC chief and West Bengal Chief Minister Mamata Banerjee came calling to discuss problems over interest payments on state loans, Modi’s disposition reflected none of the political rivalry prevalent in that state between their two parties.

“Ordinances are part of the democratic process and completely constitutional. But no government, especially one that came in with a virtual landslide, would want ordinances as its mainstay and risk denting its own credibility. Given that, the idea was clearly to get all or most on board in Parliament with the crucial insurance, mining, coal and land acquisition legislation in mind,” says a BJP leader. “Should there emerge a sense that a consensus was not possible on any or all of these, the strategy was to break up the unity of the opposition parties, zero in on the more amenable ones, isolate hardened naysayers like the Congress, and wean away its traditional allies to get their backing for the bills through one-on-one negotiations. If what transpired in this part of the Budget session is any indication, that change in strategy and tactics seems to have worked for Prime Minister Modi.”

In keeping with that strategy, Finance Minister Arun Jaitley was especially careful during a discussion in the Upper House on the Right to Fair Compen- sation and Transparency in Land Acqui- sition Rehabilitation and Resettlement (Amendment) Bill, 2015, in order to allay Mayawati’s apprehensions and to take a suggestion made by her rival Mulayam Singh Yadav that all parties be consulted on this legislation.

The strategy of influencing rivals and winning friends worked. On 20 March, the last day of the first half of the Budget session, the Rajya Sabha passed the Mines and Minerals (Development and Regulation Amendment Bill, 2015), followed by its passage of the Coal Mines (Special Provisions) Bill, 2015. Both had the support of the TMC, BSP, BJD, NCP, JMM, SP and the AIADMK. “Some of that success of the Government in ensuring the smooth passage of several key draft laws may have also been facilitated to an extent by the report of the Finance Commission which gives a larger share of revenues to states,” says the BJP leader, referring to the support of those regional parties.

The Coal Bill opens this sector to commercial mining and also allows for the auction of over 200 cancelled coal blocks. It was passed by a vote of 107 in favour and 69 against. The Congress and Left voted against the Bill, while the JD-U and RJD abstained. “This is an important day for democracy, Parliament and the Indian economy,” said a delighted Jaitley, “as the politics of obstructionism of the Congress has been defeated.”

The former ruling party had already announced its support for the Insurance Bill. This amendment, which raises the FDI limit in the sector from 26 to 49 per cent, had actually been blocked by the BJP for years while it was in opposition. On the contentious Land Acquisition Bill, however, the Congress has warned the NDA that it’s unlikely to extend the same courtesy. While the Land ordinance issued six months ago lapses on 6 April, the Centre expects to forge a ‘consensus’ on it—the Shiv Sena and other allies of the NDA are likely to fall in line under pressure—before the end of the Budget session. Modi has aggressively backed the Land Bill in his Mann Ki Baat radio address, and efforts are on to re-promulgate the ordinance.

The big move in the second half of the Budget session, though, would be Independent India’s biggest tax initiative yet, the GST, and the Modi Government is keen to push it through on schedule. The long pending Constitution (One Hundred and Fifteenth Amendment) Bill, 2011, seeks to introduce a Goods and Services Tax that grants concurrent taxation powers to both the Union and the states. Indian Parliament, as part of the Bill, will however have the exclusive power to levy GST on imports and inter-state trade. Also envisaged are a dispute settlement authority and a GST advisory council that would comprise state finance ministers, the Union Finance Minister and Minister of State in charge of Revenue.

Parties such as the SP, BSP, NCP, BJD and even the TMC have played significant roles in the BJP’s floor plan during the Budget session. While the TMC, Left and SP were earlier opposed to the Insurance Bill, the Congress had reservations on the Coal Bill. A day after President Pranab Mukherjee’s joint address to Parliament, almost the entire opposition had rallied together to protest and create trouble for the Centre over the Insurance Laws (Amendment) Bill, the Coal Mines (Special Provision) Bill and the Motor Vehicles (Amendment) Bill. It was the support of the SP and BSP on Coal that gave the Modi Government its ballast in the Upper House.

What may have worked in favour of the Government is the reality that parties such as SP and BSP prefer to be on the side of the winner at the Centre. For them, power is a permanent bargain. Their support allows Modi to work smoothly in Parliament despite the staunch opposition of the Congress to some key bills. The sudden turn- around of Mulayam and Mayawati is believed to be a measure of their fear that the Centre could have them under the scanner of the Central Bureau of Investigation. Sources tell Open that the Special Investigation Team on black money headed by Justice MB Shah could look at some of the alleged investments of powerful leaders in the Hindi belt.

In its House strategy, the NDA has also factored in the pulls and pressures that are at work in Bihar, which heads for polls by 2015-end. Although the JD-U is keen on a merger with the RJD, Lalu has kept Nitish guessing. While Lalu commands close to 15 per cent of the Yadav vote and 16 per cent of the Muslim vote in Bihar, Nitish Kumar’s core constituency of Kurmis accounts for only 3 per cent. Worse for Nitish Kumar, in the last Lok Sabha election, the BJP consolidated the state’s ‘upper caste’ votes and won another 16 per cent of the non-Yadav OBC vote. Large numbers of MBCs, who form 22 per cent of the electorate, together with Paswans, another 5 per cent, also switched to the BJP after Ram Vilas Paswan joined the Modi juggernaut in 2014. The BJP is likely to play on the inherent distrust of Lalu towards his estranged socialists for its own comfort in the House. Narendra Modi, the warrior of 2014, is learning to be the charmer of 2015. The Bills cannot wait.