Honey, I Shrunk the Left!

As chief of the CPM’s central command, Prakash Karat finds himself presiding over an electoral rout and party disgruntlement 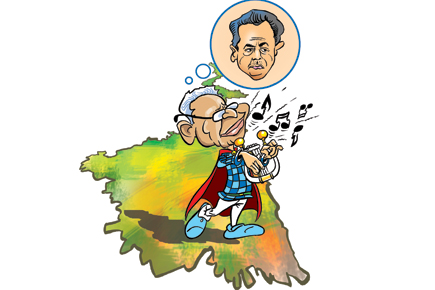 As chief of the CPM’s central command, Prakash Karat finds himself presiding over an electoral rout and party disgruntlement


What was once your kingdom/ Is now a wasteland

Prakash Karat should know his Faiz. After all, he learnt his Marxism from Victor Kiernan, a historian who was a friend and translator of the poet. Either way, these words now have an eerie echo at AK Gopalan Bhawan at Gole Market in New Delhi, headquarters of the Communist Party of India-Marxist (CPM).

An air of gloom hangs around the place. It no longer buzzes with soundbite hungry TV crews. There are no police barricades to regulate live OB vans. There are no traffic paths being cleared for yet another beaconed car bearing some leader on a visit. Things just aren’t the same anymore. It didn’t happen overnight. It began once the Left, led by CPM General Secretary Prakash Karat’s inflexible conviction that he would not allow the Indo-US Nuclear Deal to go through, withdrew support to the UPA government at the Centre last year. If this grand pullout marked the beginning of the Left’s political isolation, the results of the 15th Lok Sabha election have only etched it in stone. From being the third largest party in Parliament with 43 members, the CPM is down to 16. The Indian electorate has shunted the party down to eighth slot, below many regional parties. The only buzz, if any, within the party is the collective sound of corridor whispers—that the dogmatic approach of its Stalinist general secretary has led to this rout.

Some of those whispers are finding their way out of the privacy of inner-party discussions. The CPM’s Bengal lobby, for one, appears to be in a fine mood to knock Prakash Karat off his exalted position as commander-in-chief of all Leftist forces in the Indian political arena. West Bengal Chief Minister Buddhadeb Bhattacharjee skipped a politburo meeting held in New Delhi on 18 May. But Buddhadeb Bhattacharjee found something better to do in Kolkata. He instead went to meet his predecessor and veteran Marxist Jyoti Basu, even as the Bengal contingent within the politburo in New Delhi raised angry questions over the central leadership’s push for a Third Front (anti-BJP and anti-Congress) that Karat had staked everything on. It ended up as a ‘thud front’, quip critics.

At the 18 May meeting, things seemed to have come full circle for Prakash Karat. This was the leader, everyone was quietly aware, who had led a tirade within the party against Basu’s taking charge as prime minister of the United Front government that was formed after the 1996 general election. The leadership of a coalition united by secular opposition to the BJP rather than by communism, Prakash Karat reasoned, would entail ideological compromises and thus prove counterproductive to the party’s long-term agenda. The politburo, prodded by Prakash Karat to accord Marxism priority over pragmatism, endorsed this stance. Jyoti Basu accepted this ‘collective’ decision at the time, but only to later term it a “historic blunder”.

Could the 2009 election have been another historic blunder? An error in reading a rightward shift in the Congress? Or, perhaps, a leftward drift in Indian politics when instead the popular trend was in favour of a consolidation at the centre? In terms of tie-ups, what is clear is that Karat staked too much on his motley pre-poll alliance, the Third Front, at the cost of useful allies like the Samajwadi Party (SP) and Dravida Munnetra Kazhagam (DMK). Oddly, the Third Front’s operating principle was opposition to the Congress’s centrist policies, which lacked cohesion and arguably even coherence. In a major embarrassment to the CPM, just days before the last electoral phase in which 11 of its crucial constituencies in West Bengal went to the polls, its pre-poll ally Telangana Rashtra Samiti (TRS) sneaked away to join the BJP-led NDA, a rightist formation! For a party that lays such store by first principles, this was a tragicomical turn of events.

The CPM central leadership had lost its grip over the party even before the polls. The politburo, for example, couldn’t get the Kerala Chief Minister VS Achuthanandan to toe the party line. The 85-year-old VS refused to back the party stand that the CBI chargesheet against his old communist rival Pinarayi Vijayan, also the CPM’s state secretary, was ‘politically motivated’. The same politburo that had suspended both VS and Vijayan in May 2007 for sparring in the open failed to impose itself on VS just before the election, at a time it mattered most. On 14 May, the day the party found itself nearly wiped out in Kerala, the CM was in a jolly mood. “It is not a verdict against my government,” he said, after cracking a joke or two, insisting that the Politburo’s defence of Vijayan in the Rs 370 crore Lavalin scam was a big reason for the party’s dismal showing.

Things in Bengal are no better for the CPM. The West Bengal unit is livid that the central leadership did not pay heed to its demand for a pre-poll understanding with the Congress in the state. So miffed was Prakash Karat with the Congress that he made public statements ruling out the possibility of a tie-up with it even after the election. Meanwhile, the CPM in Bengal just couldn’t live down Nandigram, where 14 people protesting land acquisition by its state government (for a proposed chemical hub) were killed in March 2007. But such is the dismay at Prakash Karat’s posturing that both Bengal secretary Biman Bose and the state industries minister Nirupam Sen have said that the state’s ‘active industrialisation’ policy had nothing to do with the electoral drubbing! In other words, the politburo has managed to unite party members in both Kerala and West Bengal in blaming it for the defeat. This, despite the fact that the Achuthanandan and Bhattacharjee governments are poles apart in their attitude towards business.

Increasingly, CPM members are invoking the contrast between Prakash Karat and his predecessor as general secretary, Harkishen Singh Surjeet, and it is not flattering to the current leader. The numbers speak for themselves. When Prakash Karat took over in 2005, the party had its highest number of MPs ever. Now it has its lowest since it was formed as a breakaway from the Communist Party of India (CPI) on 11 April 1964. Harkishen Singh Surjeet, a Sikh peasant who cut his political teeth during the Independence movement, was among the CPM’s founders. Prakash Karat, from an urbane Nair family, was radicalised during his days at Edinburgh University, and once he joined the party upon his return, has followed a trajectory through the party that was carefully monitored by his seniors.

As an ideologue, Harkishen Singh Surjeet was never a match for Prakash Karat. But while he was often countered by Das Kapital thumpers within the politburo, the older leader was aware that his voice reached far and wide outside. Today, when Prakash Karat speaks, the politburo listens, but no one outside seems to. Never having been a grassroots politician—after all, being president of the student’s union of Jawaharlal Nehru University with its make-believe world of Left politics is hardly preparation for the tugs and pulls of Indian democracy—Prakash Karat has rarely valued flexibility.

If there’s someone in the CPM who strikes a decidedly less doctrinaire posture, it is Prakash Karat’s colleague Sitaram Yechury. At one time, this Surjeet protégé was seen as the more suave of the two. But Sitaram Yechury’s charm was of little use once his role was reduced to defending his general secretary’s political misadventures in TV studios. Now, as opposition to Prakash Karat mounts within party ranks, the logic in attacking the Manmohan Singh government for the Nuclear Deal is sure to be reassessed. Electorally, it drew a blank. The Deal survived the 2008 trust vote in Parliament, and now the Congress is back stronger—with nearly 13 times as many seats for itself as the CPM. Ironically, the SP, for which Surjeet had tried to win Congress favour in 2004, is extending external support to the new government, while the CPM sulks and Congress says it’s fine by its own solo self.

That spells irrelevance for the Left in the present scheme of things at the Centre. Its hold on policymaking is gone. Perhaps General Secretary Prakash Karat could go back to his old hobbies, reading detective fiction and penning argumentative articles for his party mouthpiece for acolytes to ponder. Or even pick up new ones, watching action films for a change, or just wondering what Faiz would’ve made of the ebb and flow of preferences in a vastly different world.