Gujarat Is Not Done with Its Caesar

…and who but Gujaratis themselves can you blame for it? 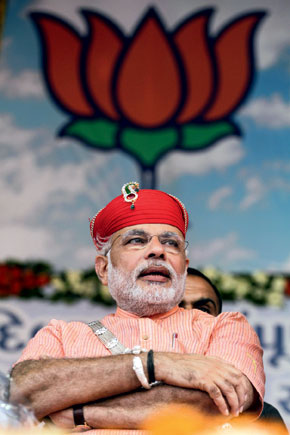 …and who but Gujaratis themselves can you blame for it?


What do citizens want?

Juvenal said they wanted only two things. Not a republic and freedom, but bread and circuses.

Rome was fed by Egypt, whose fields irrigated by the Nile grew the wheat. Egypt was a thou­sand miles away, across the Mediterranean in north Africa. Ensuring that this supply came to Rome, through a strong state and good gover­nance, meant bread.

Circuses meant something different from clowns and trapeze artists. The circus, which means circle, was a round stadium, like the Colosseum. What happened at the circus was killing. Gladiators butchering slaves, dis­membering one another and slaughtering peo­ple of different faith: Christians. The killing was done for the entertainment of Rome’s citizens, who enjoyed watching the suffering of the people—women, children, men—they thought of as Barbarians.

So long as the people were given bread and the killing in the circuses, said Juvenal, the state was fine. He was a satirist, but I think he was being serious when he said this. The citizens of Rome wanted little else.

Caesar was a dictator, but appointed by vote. He also, this will come as a surprise, gave Romans the right to vote him out as dictator. His crime is said to be crossing the Rubicon river with his army and entering Rome. (Strangely, this crossing finds no mention in Caesar’s great book about his rebellion, The Civil Wars). The taking over of the Senate was not by itself a crime; that was just politics.

What do Gujaratis want? The citizens of that state voted their Caesar in and they can vote him out. Is he also a dictator?

Let’s look at the background. The Congress hasn’t won a majority in Gujarat since the Babri Masjid was pulled down by the BJP. Hindutva made Gujarat a solid BJP state 20 years ago.

In the first few years of power, the BJP’s lead­ers fought among themselves.

What did they fight about? Small things. Some to do with government: whose supporter got what ministry and chairmanship of what board. Some to do with the party: whose follow­er got a ticket, who became head of a city unit.

The fighting itself was vicious. Shankarsinh Vaghela broke the party and took half its MLAs to Khajuraho, leaving the loyalists of Keshubhai in Gandhinagar. Someone clever coined the phrase ‘Khajuriya versus Hajuriya’  (those who say: ‘Ji huzoor’ all the time.) It is un­important who won that round, and it would happen again.

Through all this mischief, the Gujarati voter kept returning the BJP to power.

After a fourth chief minister was brought down internally, and the BJP lost a local body election, the RSS stepped in. KS Sudarshan, who became Sarsanghachalak in 2000, deployed two senior pracharaks to tack­le the problem. Narendra Modi would manage the government as Chief Minister. Sanjay Joshi would manage the party. The feuding BJP lead­ers agreed on the RSS’s assurance that this was good for the party and backed off.

Modi told Sudarshan he needed a free hand to clean up the mess. He got it. His clean-up in­volved sacking everyone and taking their jobs. Modi was Gujarat’s minister for finance, home and industries, the three big portfolios, by 2006. He was also minister for Narmada, India’s larg­est irrigation project, and minister for Kalpasar, a massive project conceiving a dam across the Gulf of Khambhat. He was also minister for pet­rochemicals (affecting Reliance), for ports (af­fecting Essar), for mines and minerals (affecting Adani) and energy (affecting Torrent). Tata came under the industries ministry already mentioned.

He was also minister for information and broadcasting, deciding which newspapers would get government advertising.

All factions were out. Modi was the govern­ment. The second thing Modi asked for was a say in managing the party in Gujarat. The govern­ment and party were not two wholly separate things, he said to Sudarshan.

He used his power in government to brush aside Sanjay Joshi and his team. Modi then re­placed the second- and third-level BJP leaders in districts and Gujarat’s big cities with men and women who now got the job because of their loyalty to Modi. At this point, the old, previous­ly feuding leaders—former chief ministers Keshubhai, Suresh Mehta and Dilip Parikh—out of power in government and their support­ers without work and desperate, threatened to break the party.

Modi was unmoved and told the RSS the Gujarati voter was with the BJP, not individuals. He was right. The old men broke from the party they had built over 40 years. Nothing happened.

The problem was what Modi meant by BJP, which had now become an organisation work­ing for one man.

When Joshi tried to retrieve power for the RSS, he was defanged through a sex scandal. Joshi, or someone who looked remarkably like him, was filmed bedding an acquaintance’s daughter. The videos were distributed to the BJP’s national leadership by someone. It is not known for certain who, but the RSS suspects it was some­one from the state police. Joshi went under­ground in shame. To the RSS’s bitter complaint of his consolidation of power, Modi responded by giving up one ministry—finance. The rest he kept and still keeps. Finance was given back to Vajubhai Vala, who had been sent to the party as its president.

Modi then finished the job of taking over the party. The climax came with his replacing the last first-rung leaders left. Kashiram Rana, Lok Sabha MP from Surat since 1989, undefeated through six terms—and seven prime ministers from VP Singh to Manmohan Singh—was de­nied a ticket for no reason in 2009. A woman named Darshana Jhardosh became MP.

Advani’s constituency is state capital Gandhinagar, from where Modi can unseat him without effort. Jaitley doesn’t contest elections. After the Vajpayee government fell, Modi gave Jaitley a Rajya Sabha seat from Gujarat.

Two out of four on Modi’s side. The central leadership was silenced. When the RSS tried to rehabilitate Joshi at the BJP’s national adhive­shan this year, Modi got him summarily evicted and humiliated. How? The media said Modi would not attend, then said he had threatened to break the party if Joshi was not sent home.

By now, the BJP in Gujarat had become Modi. He would just take the party away, not break it. The BJP and RSS succumbed.

It is true that Modi consolidated his power but it is also true that he was efficient in his use of it. The state’s economy is perceived to have grown strongly, and Gujaratis believed they got their bread.

In 2002, Modi gave them their circus. And what a good one that was. Gujarati gladiators (like all Indians, brave in a mob) went after other Gujaratis, and their children and their women. The power of the state stood aside. Across cities of Gujarat, large audiences watched, often cheering.

I blame not Modi for the violence. I blame its participants, ordinary Gujaratis. They have little shame for what they have done and no remorse.

Gujaratis like to think they are great national­ists. It doesn’t occur to them that India suffers every time they triumphantly keep memories of the massacre alive, by backing the man first unwilling or unable to stop it, now too incom­petent to prosecute its participants.

They are voting Caesar back to power.

(Aakar Patel is a Bangalore-based writer and columnist. This is the first of a series by him on the upcoming Gujarat elections)