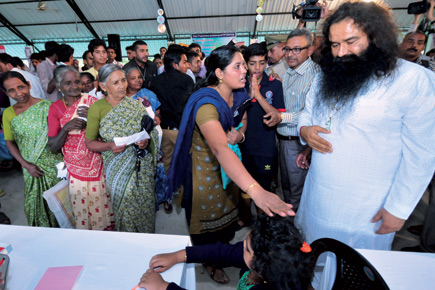 The community hall of Greenline Holidays, a tourist resort located in the lush verdant hills of Vagamon, Kerala, is crowded with workers of tea estates, a sizeable number being women. They live in nearby villages, but don’t have to go to work today because it’s a Sunday. They were brought in buses to the venue by 9 am, and since then have been patiently waiting without a clue about when the programme will begin. Gurmeet Ram Rahim Singh, who heads Dera Sacha Sauda (DSS), makes a dramatic entry to the hall at 10.30 am. Singh is the third chief of DSS, a religious sect founded in 1948 and based in Haryana. He is accompanied by a large group of followers who have also come all the way from Sirsa, the headquarters of DSS in Haryana. A woman devotee addressing the crowd in a mixture of Malayalam and Hindi desperately tries to make them shout the slogan, ‘Dhan dhan Satguru, tera hi aasra’ (‘Glory of the Satguru, you are our shelter.’) Except for a few children, no one responds to her exhortations.

Outside the hall, a team of percussion artistes perform the traditional Keralite orchestra, Pancharimelam. The armed Haryana policemen who are part of the security detail of Ram Rahim Singh bow their heads as he climbs the stage. He is dressed in a bright white kurta-pyjama and waving his hands at the crowd. It is a session of prayer and meditation, to be followed by a free medical camp. Unlike the cultism that Rahim Singh evokes in Punjab and Haryana, here, most men and women seem more curious than swayed. Pennamma, a tea estate worker seated next to me, catches hold of my hand and tells me she is scared to see all the armed policemen around. It is the first time in her life she has been so close to a gun. I can see a team of the Kerala Police standing behind the hall, exchanging contemptuous glances with each other. They are all here to protect Singh, who has Z level security cover, and are the only people who know that I am a journalist and not a devotee.

This is the Dera chief’s tenth visit to Kerala and the second one to Vagamon. According to the police, since 2012, he has visited Kerala five times. Each time, he stayed between 20 days and a month, travelling extensively in all the hilly districts and visiting lagoons in Ernakulam and Alappuzha. “His activities are under surveillance. We have some clue that he has business interests in Kerala,” says a high-level state intelligence officer, adding that they keep an eye on Rahim Singh because of the controversies that trail this godman.

Back home, Rahim Singh has been facing allegations of numerous criminal offences, including rape, murder and illegal stockpiling of arms. The first controversy around him was triggered in 2002 when a sadhvi follower sent an anonymous letter to the then Prime Minister Atal Behari Vajpayee alleging rape by Singh. The letter spoke of large- scale sexual exploitation of women devotees in the Dera. The High Court of Punjab and Haryana took cognisance and ordered an enquiry, but the case is still pending. Recently, Singh made a submission in court denying the charges of rape, claiming himself incapable, physically and mentally, of sexual intercourse.

Other criminal cases that Singh has figured in include the murder of a journalist who had consistently written about alleged malpractices at the Dera. Ram Chander Chathrapati, editor of Poora Sach, was shot dead by two bike riders who claimed to be DSS followers. A Dera follower, Hans Raj Chauhan, has, in a 2012 complaint filed at the High Court of Punjab and Haryana, also accused Singh of forcibly castrating him and 400 others. Most of these charges remain under investigation and Singh has never personally appeared in any court till date, successfully getting exemptions. On 4 June this year, a Bathinda court exempted him from appearing in court for a case of hurting religious sentiments, which he is alleged to have done by dressing up like Guru Gobind Singh.

The speech he delivers this day in Vagamon is old rhetoric on the ‘good’ and ‘evil’ within oneself, and the quest for self knowledge. It is followed by Singh crooning a devotional rock number from his album Love Charger. It is a mellow performance accompanied by slow head and body movements; but on YouTube Singh can be seen performing the same song in an entirely different avatar. In this internet video, he is on a stage at a large ground, performing like a rock star—in sleeveless glitzy multicoloured attire—while a hysterical crowd cheers him on. The video went viral recently; but in Kerala, a guru with a tinge of rock stardom is an alien idea. Many in the hall look bewildered.

After the speech, song and prayer, the floor is open for questions. The woman who had been trying to teach the crowd the Guru Mantra, translates the questions and answers. The microphone is given to a middle-aged woman in shabby clothes. She introduces herself as a tea estate worker from a nearby village and asks for Rs 3 lakh to take her husband, a cancer patient, to hospital. She is timid and nervous, her voice low, as if she wants only the Dera chief to listen to her sad story. Another woman, a homeless widow, says she wants a house of her own. There are few spiritual queries; most only have requests for houses, land, money and medical aid. Everyone is given the same assurance by their guru: that someone would come, collect their addresses and do the needful. A widow with no relatives asks for either free medical aid or money because she has cancer. Singh advises her to gather inner strength, which he says would enable her to fight all diseases. Most cry while talking about their lives, stricken as they are either by poverty or ailments. In return, they are showered with prayers and advice.

The language barrier between the people and the organisers helps me. They identify me as a devotee who can handle both English and Malayalam, and ask to assist them in collecting names and addresses of all participants. I talk to a huge number of women gathered in the hall and can find no one who has turned up here out of devotion—just about everyone present expects some monetary benefit and free medical aid from the Dera.

The few days that I spend in Vagamon as a tourist—and devotee of Ram Rahim Singh—make it clear to me that this spiritual corporation is keen on opening a branch in Kerala. What is peculiar is its belief that it will find takers in a state at the tip of southern India that speaks only Malayalam, given how closely the DSS has been associated with Punjab and Haryana.

All the hotel rooms and cottages in Vagamon have been booked by the DSS for 15 days. “They have booked around 30 cottages here. Around 800 people have come with him. All the staff-managers, helpers and chefs were asked to move out. They have taken complete control. They have employed their own chefs in kitchens,” says the manager of one of the resorts. He was even asked by Singh’s men not to eat non-vegetarian food until their guru leaves.

“They are imposing vegetarianism,” says a local police officer on duty. “We were asked by the Haryana Police not to eat non-vegetarian food while on duty. We ignored him. Why should we listen to them?” Another police officer claims that Haryana cops also asked them to bow their heads before the guru. “I don’t understand why all these cops are so docile [before] this man! Isn’t he an accused in criminal cases?” the local cop asks. The camera crew hired from Kochi to record the Dera chief’s Vagamon days have also been asked to stay strictly vegetarian. “They instructed the hotel staffers not to give us non-vegetarian, but we managed to get chicken and fish,” says a young ad- filmmaker working as part of the team.

KR Rajeev, a social activist in the area, says he has no doubt that the Dera has big plans for Vagamon. “They have some real estate interests. They are exploiting the vulnerability of the poor here. The life of tea estate workers in this area is deplorable,” he says. Real estate agents in the locality as well as top members of the state intelligence confirm that there is something afoot. For instance, DSS is buying the Indo-US International School located in Theekkoyi Panchayat along with 26 acres of land. “The deal is done. Only the paperwork remains,” says an employee of the revenue department that deals with land registration. A few real estate agents Open spoke to say that Singh’s men have asked them to look for a hundred acres of land. “This is in addition to the school. We don’t know what they want to do here, but for us this is a very good deal,” says a realtor who does not want to be named.

“This exhibition of the free medical camp and meditation is an eyewash,” says PA Umesh, a CPI activist. “[Vagamon] is abundantly green and known for its scenic beauty and biodiversity. We have already been facing the threat of hills being bulldozed for construction and sand- mining. Vagamon cannot afford being home to such a big spiritual industry.”

In his Greenline speech, Singh tells the crowd why he has armed police escorts: because he has freed thousands of young men of drug addiction through prayer and meditation and has thus become a target of the drug mafia, which he claims has tried to kill him. He is being liberal with the truth; among the few credible threats he faces is one from pro-Khalistan militants. But it holds no martyrdom.

None of the villagers participating in this camp has heard of the controversial aspect of Singh’s life. Apart from charges of rape and murder, he is said to have stirred up sectarian trouble as well: his alleged sartorial impersonation of Sikh Guru Gobind Singh had resulted in communal clashes.

Singh also claims not to take donations. “You may wonder how we manage these activities without donations. We have 700 acres of land in Sirsa where we cultivate 13 food crops,” he says.

Gurmeet Ram Rahim Singh has never given an interview to the media, but we decide to try our luck anyway. The communication manager of DSS says that a personal interview would be impossible, but he would answer an email questionnaire. So we send a set of questions, asking him about the purpose of his visits and plans in Kerala; we also ask him about the cases against him, his views on homosexuality, who he supported in the recent General Election (because of the Dera’s rumoured electoral sway in Punjab), etcetera.

A few hours later, we are informed that such an online interview would also not be possible. The communication manager offers us no reason for this about-turn, except to say that her duty is merely to convey to us whatever the Dera leader asks her to. That is no surprise. There are plenty of godmen and godwomen who operate under a veil of secrecy in Kerala. This merely adds another to that number.

What some find worrying, however, is that the geographical locations targetted by DSS—Wayanad, Munnar and Vagamon—lie on the Western Ghats where mining and further construction are strongly discouraged. Vagamon is among the hotspots identified by the Gadgil Committee that need protection from human intervention—and that would include godmen.