From Court to House 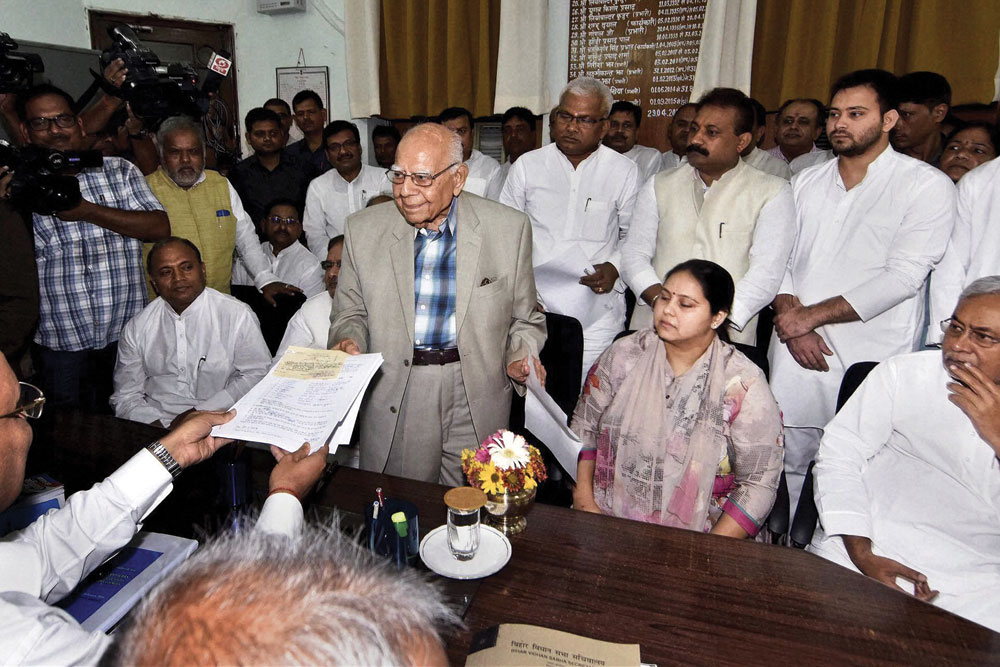 IN NOVEMBER LAST year, when Lalu Prasad hugged Delhi Chief Minister Arvind Kejriwal at the oath-taking ceremony of the newly-elected Chief Minister of Bihar Nitish Kumar, shutterbugs captured the politically awkward moment, much to Kejriwal’s embarrassment. The Aam Aadmi Party chief, seeking to distance himself from Lalu Prasad, had to clarify that it was the latter who had initiated the embrace. But a few days ago, away from the media glare, Kejriwal picked up the phone to call Lalu Prasad. The purpose: to pitch for senior lawyer Ram Jethmalani as an RJD candidate for a Rajya Sabha seat. Jethmalani is a friend to both leaders, defending Kejriwal in the civil defamation case filed by Finance Minister Arun Jaitley and representing Lalu Prasad in the fodder scam case. A sitting Rajya Sabha MP from Rajasthan, Jethmalani is nearing the end of his third term in the Upper House—the seat will fall vacant on 4 July. In 2010, the veteran advocate got elected as an independent supported by the BJP. A lot has changed since and the 92-year-old needs another party to back him this time. Thanks to the number of politicians he has represented in court over the years, he should have no trouble getting nominated.

Going by the candidate lists of most political parties, the Upper House could soon resemble a courtroom. As influential lawyers vie for Rajya Sabha nominations, parties that they have helped out of a legal pinch or two are willing to back them more than ever before. The Congress, which already has Abhishek Manu Singhvi and KTS Tulsi as MPs in the Upper House, is endorsing P Chidambaram, a lawyer by training, besides practising lawyers Vivek Tankha, who represented party leaders in the Vyapam case, and Kapil Sibal, the key legal eagle in the National Herald case.

“Lawyers have a good grasp of legal and administrative issues, they have good debating skills,” says KTS Tulsi. “This makes them a perfect match for being Parliamentarians.” Often, it is not what they can do as MPs but what they did as lawyers that swings the nomination in their favour. Take the case of Sibal, former Union minister in the UPA Government. In November 2014, he was in the race for the lone Rajya Sabha seat from Uttar Pradesh. The Congress won the seat with the support of Mulayam Singh Yadav’s Samajwadi Party, but it wasn’t Sibal who became MP. Although Mulayam Singh had called Congress President Sonia Gandhi to say that he would support Sibal’s candidacy, Gandhi handpicked PL Punia, former Lok Sabha MP and a Dalit face. A disgruntled Sibal then began to excuse himself from party work and focus on appearing in court for high-profile clients. The National Herald case, filed by BJP leader Subramanian Swamy in 2012, changed all that. When the Patiala House court asked the Gandhis to appear before it on 19 December 2015, they sought Sibal’s services and he appeared as the main lawyer in the case. His importance has since grown manifold, for he is defending the Gandhi dynasty. The party needs him more than he needs the party and he has become the obvious choice for the lone Rajya Sabha seat from Uttar Pradesh.

At the same time, Sibal is defending tainted Sahara Group chief Subrata Roy in a SEBI case where he is accused of failing to refund money collected from depositors for illegal schemes. When Sibal got four weeks’ parole for his client after his mother’s demise, Roy returned the favour by visiting Mulayam Singh Yadav in Lucknow and requesting his support for Sibal in the upcoming Rajya Sabha elections. “Lawyers handle high-profile cases and they are well-connected. Anyone who is on the periphery of the corridors of power would want to get in,” says KC Tyagi, senior JD(U) leader and a retiring Rajya Sabha MP. For business leaders, too, the Parliament is a place where they can rub shoulders with the most powerful people in the country, allowing them to enhance their social profile. In the past, doyens of industry such as KK Birla and MS Oberoi served multiple terms in the Upper House. Liquor baron Vijay Mallya served two consecutive terms before resigning. Most business leaders prefer to contest as independents with support from various parties or they negotiate with a regional party to get appointed as their candidates.

The Jharkhand Mukti Morcha, a regional party founded on the principle of working for tribals, has welcomed outsiders with open arms. Senior Delhi-based lawyer RK Anand, who defended former Prime Minister Narasimha Rao in the JMM bribery case, became a Rajya Sabha MP from the state in 2000 with the support of the Congress and the JMM. He was denied a ticket for a second term and later shifted loyalties to Haryana’s Indian National Lok Dal. The allegiance has professional roots: Anand is defending Om Prakash Chautala who is serving a jail term after being implicated in a teachers’ recruitment scam during his tenure as Chief Minister of Haryana. Anand is in the fray for an Upper House nomination once again, but from Haryana and he hopes to get the support of the INLD and the Congress in the state.

In 2008, Reliance Industries President Parimal Nathwani paradropped into Jharkhand’s political arena as an independent candidate. He managed to get the support of JMM and BJP legislators, resulting in an easy win. In 2014, he was once again elected to the Rajya Sabha from Jharkhand. “We call them moneybags. The moment they file their nomination, we know that they will start negotiating votes,” says a former MLA from Jharkhand. Babulal Marandi, chief of the Jharkhand Vikas Party, says businessmen see Jharkhand as a state rich in mineral resources and an entry into politics could help their business interests here.

Uttar Pradesh is another state where anyone can secure a Rajya Sabha nomination through money power and a good rapport with local leaders. In 2002, this open secret caused a big embarrassment for the BJP when arms dealer Suresh Nanda filed his nomination as an independent, brazenly announcing that he had the support of 10 BJP legislators. The BJP and other parties had taken a joint decision to back another independent, Delhi-based hotelier Lalit Suri. On the day of filing nominations, Nanda was coerced by BJP legislators to withdraw from the race. “I am being cheated. I have spent Rs 5 crore,” Nanda was heard saying. Suri, who had been in London when this skirmish played out, arrived in Delhi almost a winner. The selection of Sanjay Seth, an industrialist based in Lucknow, on a Samajwadi Party (SP) ticket this time comes as no surprise. Better known as Shalimar Seth in political circles, he is closely associated with Mulayam Singh’s younger son Prateek Yadav. His construction company Shalimar Corp is working on Mulayam Singh’s dream project, the Jai Prakash Narayan International Centre in Lucknow. He was awarded a government contract of more than Rs 500 crore for the project. Last year, Seth was nominated by the SP to the state legislature, but an Income Tax raid at his company offices followed and Governor Ram Naik found him unworthy of candidacy. Seth would go on to chase bigger dreams.

In neighbouring Bihar, Dr Mahendra Prasad alias King Mahendra, a sitting Rajya Sabha MP on a JD(U) ticket, is serving his sixth consecutive term in the Upper House. The Congress, the RJD and the JD(U), each of the three parties has backed him twice since 1985. He runs a number of pharmaceutical companies, with his business spread across continents.

For a well-funded national party, though, lawyers are prime assets. “It is also because the judiciary has become more active,” says Tulsi. “With judges playing a role in each and every aspect of governance, political parties need more lawyers to articulate their viewpoints.” Lawyers are certainly getting used to this. After all, like political leaders, they have built their careers on one thing: winning.