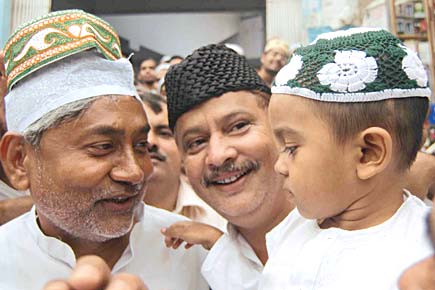 
In the twists and turns of alliance politics, no state offers more scope for skullduggery than Bihar. It is here that Nitish Kumar is setting the stage for a loyalty switch that could recast the entire political scenario of the state. The impact of such a realignment at the national level could far exceed the damage that Naveen Patnaik inflicted on the National Democratic Alliance (NDA) by dumping it last month in Orissa.

Bihar’s Chief Minister Nitish Kumar knows what it means to be caught between a rock and a hard place. His party, the Janata Dal United (JD-U), depends heavily on the support of the Bharatiya Janata Party (BJP; core of the NDA), for a ruling majority in the state’s legislative Assembly. But his political future hinges on attracting the bulk of BJP-averse Muslim votes in Bihar.

“If we don’t act immediately after the Lok Sabha election, we will sink into a crisis that we may be unable to reverse.” So did Nitish Kumar brief his closest aides in-camera a few days before clinching a favourable seat-sharing deal in Bihar with its current ally, the BJP. Shortly after, one of these aides let it slip that Nitish Kumar was discreetly laying the ground for a switchover to the Congress-led United Progressive Alliance (UPA), which formally includes his rival Lalu Prasad’s Rashtriya Janata Dal (RJD) as an alliance member. The final call, of course, would await the Lok Sabha poll results. The JD-U leader, who prefers anonymity, claims that Bihar’s CM already has an understanding with the Congress by which the two parties would ditch their respective partners in the state to reconstitute the UPA after the general election. The JD-U would snap ties with the BJP and exit the NDA, while the Congress would leave Lalu’s RJD out of any alliance it forms should it be invited again by the President to form a government at the Centre.

Recent events point in the same direction. If Nitish Kumar’s call for legal action against Varun Gandhi for his Pilibhit utterances offered one kind of indication, the fact that this was welcomed by Congress general secretary, Digvijay Singh, was a signal from the other side. Congress sources confirm that an informal deal of this nature has indeed been struck, but add a caveat—the swap will happen only if Nitish Kumar outperforms Lalu at the hustings.

As the Congress hedges its electoral exposure, Bihar’s other political players have not been twiddling their thumbs either. Lalu chose to play hardball on his seat-sharing ‘talks’ with the Congress in complete awareness of its behind-the-scenes dalliance with his rival. The agreement that Lalu did finally forge was with yet another UPA member with its base in Bihar, Ram Vilas Paswan’s Lok Janashakti Party (LJP). The two carved up the 40 constituencies between themselves, and left three as a token for the Congress. This was not bravado as much as calculation. Lalu, a steadfast foe of the BJP, cannot afford to lose the Congress as an ally, and so his constituency carve-up was done to maximise his chances of notching up a parliamentary tally not much lower than Nitish Kumar’s.

All this also means that the BJP has no choice but to continue its on-paper alliance with Nitish Kumar on the terms he dictates. Bihar’s CM has already used this leverage to wrest concessions on the number of seats his party will contest.

This game of bluff and double bluff, with everyone looking askance at one another, has been set off by the state’s new caste dynamics observed. Some of the Muslim vote, so far seen as a single block backing Lalu, went the JD-U’s way in the last Assembly election. The fracture was along caste lines, with Pasmanda Muslims refusing to be swayed by the ‘defeat BJP’ slogans of their upper-caste co-religionists. The stakes now at the Centre may be different, but the trend does not augur well for the RJD. Even a tiny crack in Lalu’s minority vote base will upset the Muslim-Yadav (M-Y) combination that gave him 22 of Bihar’s 40 parliamentary seats in the 2004 election (the JD-U won six and the BJP five).

In Bihar, Muslims and Yadavs make up 16 and 11 per cent of the total population, respectively. But as many as two-thirds of the state’s Muslims are Pasmandas. In the 2004 Lok Sabha polls, when the All India Pasmanda Muslim Mahaj had supported the RJD-Congress-LJP combine, the RJD’s vote share was 30.67 per cent. In the 2005 assembly polls, after the Mahaj switched allegiance to the JD-U, the RJD’s vote share declined to 23.45 per cent and the party lost power. This year, too, the Mahaj has declared support for the JD-U.

Yet, Nitish Kumar won’t write off his rival’s electoral prospects until he is assured of an easily divisible Muslim vote. According to the anonymous JD-U leader, “Many leaders in the party feel that inroads into Lalu’s support base are only possible by drawing away a sizeable section of Muslims from the RJD. This is possible only if the JD-U joins the Congress-led secular formation. Even the Third Front option for Nitish would not be that effective in breaking the M-Y factor because Lalu would still be seen among minorities as part of the largest secular formation.”

In theory, a shift in loyalty to the Congress would endanger Nitish Kumar’s government in Patna, since he relies on BJP’s 55 legislators to support the JD-U’s 91 in the 243-member State Assembly. If he cuts the BJP loose, he will still need 31 other legislators to help his government last its term (which ends only in October 2010); his aides claim to have 41 as call options for support. By Nitish Kumar’s plot, a heavy loss suffered by the RJD at the polls would result in Lalu’s state legislators scurrying to his camp for political survival; if that fails, plan B would be a mid-term Assembly election in alliance with the Congress.

Yes, it’s confusing. For the moment, though, it leaves Lalu holding on to Paswan, the BJP to Nitish, and the Congress hoping that whatever the outcome, it will not be the loser.