For Solace and Refuge

As her comrades at the Golden Temple complex dropped dead one by one, she was soon holding a rifle herself 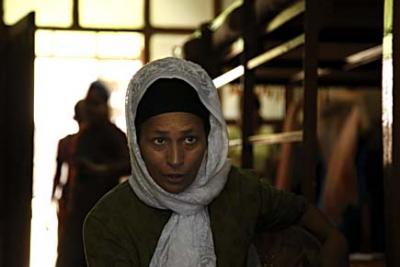 She entered the temple complex a devotee, but left having crossed the line that divides the terrorists from their sympathisers


When Operation Bluestar got underway, Kulbir Kaur was just 20, a third year BA final student from Hoshiarpur, visiting the Golden Temple in Amritsar as much to offer prayers on Guru Parab as to listen to Jarnail Singh Bhindranwale. She entered the temple complex a devotee, but by the time she left she had crossed the line that divides terrorists from their sympathisers. “We had gone there to listen to Santji (Bhindranwale), but found ourselves caught in the crossfire. We were stuck on the first floor of Guru Nanak Niwas when the Army started firing. The only thing that came to mind then was to lay our lives down fighting the attackers,” she says.

Kaur found herself amid a group of young men and women armed with pistols, SLRs and .303 rifles. As her comrades dropped dead one by one, she was soon holding a rifle herself, recalls Kaur 25 years later, sitting in the rented house in Mohali, Punjab, that houses the Gur Asra trust. She set up this trust and a girls’ home for children of terrorists killed in Punjab—‘martyrs’ to her mind—after her release from jail in 1996.

Kaur was neither caught nor killed in Operation Bluestar. She was among those who escaped and went underground, only to remain a fugitive till 1993. She crossed over to Pakistan in July 1984. “We crossed over and back several times,” she says, adding that she did everything needed for the cause, from networking to “field work”—a euphemism for terror attacks. She says she was working as a hostel warden in Himachal Pradesh at a girls’ school. “The police arrested me in May 1993 and kept me in illegal detention for nearly 11 months. Finally my husband and I were shown ‘arrested’ and put in jail,” she says.

When she delivered her second child in January 1995, she was still in jail facing trial on terror charges. It was then that she conceived her home for children of terrorists. “I set up Gur Asra with a bunch of 25 girls. Most children had lost both parents in the fight with the state’s forces,” she says. In the 12 years that have followed, nearly 400 children have grown up as young adults and left. Daughters of those who were killed between 1984 and 1992 have gradually left the home. Only a handful remain. “I think I will have to close this place down in another five years or so,” says Kaur, “I am thinking of starting an old age home instead.” The Shiromani Gurdwara Parbandhak Committee has stopped funding it.

From her close association with families of dead terrorists, Kaur is full of tales of the prolonged agony and neglect of their widows. “Many have been shunned by their families and their land taken away. As they grow old, they will need a place to stay,” she reasons, as she plans the trust’s future. Kaur’s own life was unplanned. “The movement for Khalistan did not take a planned path. As things happened to us, we acted,” she says. “It is easy for the PM to say that we should forget 1984. I wish he had something to show for what the state has done to bring solace to those affected.”