For an Unholy Blessing

After seers at Karnataka’s muths tilt, Sonia senses a chance 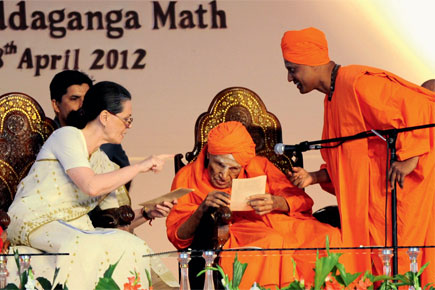 After seers at Karnataka’s muths tilt, Sonia senses a chance


BANGALORE ~ Call it caste politics, vote bank politics or social engineering, without an unholy alliance with dominant community groups, no political party can achieve power in India. Congress President Sonia Gandhi’s brief visit to Karnataka may have earned her party the much-needed backing of Lingayats and Vokkaligas, the state’s two dominant caste groups, even as she sent out a stern message to her squabbling senior state leadership to unite and get ready for a comeback.

The party, out of power in the state since 2006, virtually sealed the deal in what is being seen as a stage-managed show, with Sonia Gandhi attending the 105th birthday celebrations of a Lingayat seer in the last week of April in Tumkur, 70 km from Bangalore. Later, addressing party delegates, she laid out a roadmap with an eye on the state’s Assembly polls due in May 2013. The polls might even be earlier, given the tug-of-war between the BJP’s Chief Minister DV Sadananda Gowda and BS Yeddyurappa, whom he replaced.

“With less than a year for Assembly elections in Karnataka, there is absolutely no time to lose. Your overriding objective must be to bring the Congress back to power,’’ said the party president. Sonia Gandhi’s plainspeak comes at a time when top Pradesh Congress Committee leaders, each harbouring chief ministerial ambitions, have been working at cross purposes and blatantly encouraging factionalism. PCC president G Parameshwar and working president Siddaramaiah rarely ever see eye-to-eye and were recently summoned to Delhi.

The Congress Chief, showing signs of recovery from a surgery for which she was in the US late last year, was very clear: “This is a time for badlavane (‘change’ in Kannada), and the people of the state are demanding it,’’ she said, mixing a few words in the local lingo to drive home her point. The Congress seems to have sensed a subtle shift in its favour after it won the recent Udupi-Chikmagalur Lok Sabha bypoll, a seat vacated by Sadananda Gowda, who’d taken over as CM.

Congress leaders who attended the meeting say Sonia had a message for the party’s four Union ministers from Karnataka who have been nurturing their own constituencies instead of focusing on the party’s revival. “It was a message for them to keep their feet on the ground. It is also being construed as a warning that those straying will be marked out. This message has already percolated to the grassroots level, and workers are very happy that the party chief is taking an active interest in Karnataka politics,’’ one of them says. Senior party leaders will now have to formulate a plan to wrest the state back. The party had lost power in 2006 after its Dharam Singh-led coalition ended up paving the way for a Janata Dal (Secular)-BJP power sharing formula, under which the JDS refused to turn chief ministership over to the BJP after 20 months (as earlier agreed), which is what led to polls in May 2008 that the BJP won. That is how the BJP got its first ever government in South India.

The Congress has not won a single Assembly byelection since. It has suffered a sustained BJP campaign titled Operation Lotus to get Congress and JDS MLAs to resign and have them re-elected on BJP tickets. It was after a prolonged phase in the wilderness that the Congress won its Udupi-Chikmagalur Lok Sabha seat.

“The seers of muths (monasteries) have realised that they will eventually provoke other communities if they are seen to be favouring one or two leaders. The BJP tried unconstitutional methods like giving budgetary grants to religious muths, and the pontiffs welcomed it initially. But soon they realised that with BJP leaders falling out with one another, they were being used in political games. That is the reason they have moved away. Sonia’s visit has given a scare to Lingayat leaders who are now claiming that BJP politicians did not receive any invitation for the seer’s birthday. Tell me, if they didn’t, isn’t it clear that the muths are moving away?’’ asks former minister and Congress think-tank member BK Chandrashekhar.

At the function, the seer blessed Sonia with good health and happiness even as the Congress took the opportunity to obtain the blessings of the Lingayat and Vokkaliga pontiffs. The Vokkaliga seer Balagangadharanatha Swamiji of the Adichunchunagiri muth was also present on the occasion, and said Sonia had “great nation-building qualities”. This Vokkaliga seer was earlier close to the JDS.

Such effusive praise from two prominent seers must have been music to the ears of the Congress. The Vokkaliga seer is close to the JDS led by former Prime Minister Deve Gowda, while Lingayats are largely seen as loyal to Yeddyurappa.

Lingayats in general are thought to have distanced themselves from the Congress in 1989, after Rajiv Gandhi unceremoniously ejected the then Chief Minister Veerendra Patil from power. Sources say this sore point was touched upon by Sonia at a one-to-one meeting with the seer. She also asked him for his support next year in the Congress’ comeback bid.