Karnataka admits to a MNREGA scam pegged at Rs 600 crore 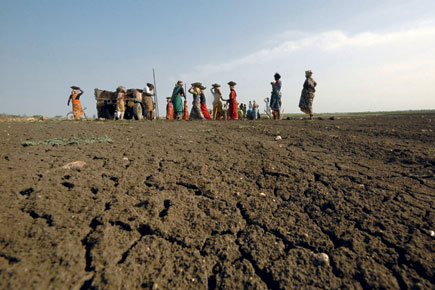 Karnataka admits to a MNREGA scam pegged at Rs 600 crore


BANGALORE  ~ That the UPA’s flagship jobs scheme under the Mahatma Gandhi National Rural Employment Guarantee Act (MNREGA) is like a leaky sieve is well known. But seldom have state governments admitted it. So when Karnataka Chief Minister Jagadish Shettar (of the BJP) last week admitted that allegations of a Rs 600 crore fraud held substance, and ordered an inquiry to uncover its details, his move took many by surprise.

So far, the scam, which allegedly took place between 2008 and 2011, had been the subject of much discussion, even as questions flew back and forth between the Union Ministry of Rural Development

and the Karnataka government, with state officials even suggesting at one point that unauthorised withdrawals under the scheme be considered ‘administrative expenses’, which would ‘close the issue’. A shocked Union Rural Development Minister Jairam Ramesh, a Congressman from Karnataka, wrote a letter warning the CM that funds would be withheld in future if the monies were not accounted for.

With the Centre drumming up much noise over what it is keen to portray as a ‘scam’, the state’s BJP government has launched a three-tiered inquiry to ascertain how such sums were pocketed by officials in charge of MNREGA projects. “The modus operandi of the scamsters was quite brazen, as they siphoned funds meant to pay those registered under the scheme without even the pretence of making dummy rosters,” says a senior state government official who does not want to be named as he is overseeing the inquiry in one of the districts.

There have been reports and complaints of MNREGA corruption in as many as seven of Karnataka’s districts, with Gulbarga, Tumkur and Shimoga accounting for most of the reported anomalies. These form a pattern, say observers, which would suggest more than petty local pelf at work. A third-party investigation has laid out what happened. Contractors billed officials for non-existent work; officials enrolled ineligible people who lent their names and shared payments with them (using dummy rosters in many places); and, in some cases, officials passed off old project work as new by simply switching survey numbers.

The fraud appears well organised, as the names of legislators and their family members have also been enrolled as workers under MNREGA. Among them is an MLC from Shimoga who runs an education institution; he justified himself by saying he’d been enrolled for his involvement in MNREGA work done on a compound wall of this institution he runs, which borders government land. Later, it was found that his name and those of his family members had been scratched off the roster. An inquiry is on.

Earlier this year, as many as 1 million bogus job cards were detected in Karnataka. The scam came to light when the Ministry audited the records after complaints came in. A third party inspection report confirmed that funds had been misappropriated. This report’s highlight was a sample verification, which threw up a series of bizarre transactions and figures, with sums ranging from Rs 6,500 to Rs 8,500 transferred to a list of so-called ‘bogus labourers’ with mysterious identities. Suspicions was strengthened a few weeks ago, as the state government sought to sidestep pointed queries and asked the Ministry to ‘write off’ the sum of Rs 600 crore as ‘administrative expenses’ and ‘close the issue’.

The Centre suspects that these funds were swindled by officials in connivance with those directly responsible for granting project works. The Ministry is now planning to summon these officials for an explanation. While drought conditions in Karnataka had the Centre releasing part of the state’s MNREGA funds recently, Ramesh is clear that no further money would be sent unless the issue is resolved to everyone’s satisfaction.

Meanwhile, a blame game has begun within the BJP’s state unit. Deputy Chief Minister KS Eshwarappa, who holds the relevant portfolio, has announced that a detailed report is under preparation and that the period pertained only to 2008-09 when former Chief Minister BS Yeddyurappa’s confidant Shobha Karandlaje was the minister in charge. “The main issue is non-payment of wages to beneficiaries,” he said, without elaborating on who pocketed the money. Shettar had also headed the department for a few months before being elevated to chief ministership.

MNREGA funds have been an easy source of money to manipulative officials across India. Earlier this year, a Rs 10,000 crore alleged scam was unearthed in UP. In Assam too, the AGP had made it an election issue last year.

In April 2009, when Open visited Bandlapalli, it was found that families with NREGA job cards had prospered locally and had been able to buy themselves cellphones and two-wheelers and spruce up their dwellings.

The scheme, which assures up to 100 days of employment (now increased to 150) to any one member of a family who enrols him or herself, has effectively stanched large-scale seasonal migration. This has led to severe agricultural labour shortages across the country. The bigger problem, it seems though, is all the money being misappropriated.