Moscow and New Delhi are updating an old friendship. Vladimir Putin’s visit to India has made that much clear. 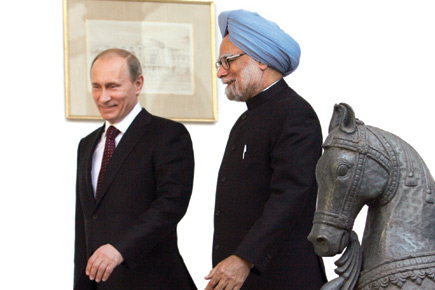 Moscow and New Delhi are updating an old friendship. Putin’s visit to India has made that much clear.


Russian Prime Minister Vladmir Putin understands power relationships, and the subtle shifts in their operating dynamics, like few others in the world. In 2008, his solution to being barred from a third term as Russia’s president was simply to have his trusted aide Dmitry Medvedev elected to the top office, while he assumed charge as PM. It was what’s often termed a ‘smooth transition’.

Given such a temperament, there was little doubt that Putin’s visit to New Delhi last week would be a success. The Indo-Russian relationship has been a vital one since 1947, and it is to the credit of both countries that clarity on three critical fronts has outlasted the turbulence of the post Cold War phase.

In fact, the three planks that have defined the relationship now look more stable than any time in the recent past. The first plank is diplomatic. Here both India and Russia have common interests at stake, especially in the volatile Afghan-Pakistan region that held the fulcrum to the Great Game of yore. “For the Russians, there is no such thing as a ‘good Taliban’. They, like us, are weary of doing a deal with the Taliban, and here there is a complete convergence of ideas,” says a diplomat who has worked on the Indo-Russian relationship closely. Russia, like India, wants to ensure that once the US pulls its forces out of Afghanistan, the strategic vacuum thus created is not filled by forces that could end up favourable to the Taliban. To that end, there is a joint search for strategic space around the Afghan arc.

Russia has also shown growing support for an expanded Indian naval role in the Indian Ocean, not just through equipment transfers like the forthcoming lease of a nuclear submarine and supply of Kamove spy helicopters, but through joint exercises now under discussion.

The second element is the defence partnership. Russia is important for India because it supplies the kind of defence platforms that no other country is willing to part with. Needless to say, this comes with a heavy price tag. However, it would be a mistake to think that India is locked into complete dependence on Moscow for high-end arms. With Russia’s economy under stress (its GDP declined sharply last year) and India’s on a roll, the commercial aspect plays a bigger and bigger role in Moscow’s calculus. The Russian defence industry needs the Indian market.

Not surprisingly, price tags are typically the friction points. But while Indian officials may seem to have overpaid for an old aircraft carrier—the Gorshkov sets the coffers back by $2.3 billion—it will plug an important gap in India’s defence preparedness. Inducting this aircraft carrier gives India sea control in its littoral till such time that an indigenous carrier, currently under development, comes on board. India is also paying an additional $1 billion to buy 29 more MiG-29 fighters on top of the 16 that India has already procured. These aircraft are for the Gorshkov.

Aware that the Indian order book is a critical source of R&D funding for the Russian defence industry, Indian negotiators of late have maximised the opportunity to gain access to technology. In fact, as the Indian strategy transforms itself from the simple acquisition of weaponry off-the-shelf to an insistence on joint development, the osmotic gains are likely to start becoming increasingly apparent. Already, the BrahMos supersonic cruise missile is a fine example of the wonders of joint development. This missile is nigh impossible to track (the most sensitive of radar systems are left blindsided), and represents a unique defence platform for both India and Russia.

Make no mistake, Russia remains India’s most reliable supplier of weapons at the bleeding edge of technology. This was so during the days that India sought cryogenic engines (and the US tried its utmost to block such a deal), and is the reality even today. With Russian democracy solidly behind him, Putin speaks firmly for his country—in sharp contrast to leaders of countries where a consensus on technology transfers eludes a multi-party system; witness the noise in the US over the finer aspects of the Indo-US Nuclear Deal. This clarity ensures that Russia can be responsive to Indian requirements that much quicker. During his latestvisit, Putin has promised access to the Elkon uranium field—the world’s largest—for joint development.

Such deals are also being eased by the way global geopolitics is shaping up. “The world is fast moving away from the unipolar US-driven order,” says Anuradha Chenoy, director of area studies, Centre for Russian and Central Asian Studies, Jawaharlal Nehru University, “India and Russia have no conflict of interest in any significant strategic sphere. Putin’s visit highlighted the fact that the relationship has a sound underpinning. Across the spectrum, from defence supplies to Afghanistan to oil, this visit has ensured a stable framework for the two countries.”

Russia, say sources, is also keen that its MiG-35, which is among the contenders for an Indian order for 126 new frontline aircraft, gets a serious look in. As an incentive, Russia is said to have assured India of an entire series of spin-offs, should the MiG-35 be chosen to expand India’s fleet of fighter jets.

And then, there is a third plank, one that has caused considerable excitement in New Delhi. India and Russia are particularly keen to grasp an opportunity that was ironically opened first by the US. The Indo-US Nuclear Deal, which grants India entry to the international market for nuclear trade in material and machinery for civilian applications, seems to have boosted Russian chances of securing some big-ticket contracts from New Delhi. Again, aided by an easier set of internal procedures, Moscow is moving fast on supplying nuclear creactors and fuel to India. On Putin’s recent tour, the country assured India of nuclear reactors worth some $10 billion, alongside uranium supplies. If all these agreements actually translate into proper deals, this would involve a total of 16 reactors. The only hitch—you guessed it—is the money demanded. Nuclear energy is expensive, so some stiff bargaining by India can perhaps give it a much-needed adrenalin shot by way of commercial viability.

The relationship is not devoid of sore points. The first is hardware servicing, specifically the poor supply of spare parts for Russian arms. A majority of Indian weapon platforms are Russian in origin. The Air Force’s MiG-27 jets are in dire need of spares, while KA-31 choppers need some technical support. Help is needed even for artillery rounds for field guns. But Russia has been both tardy and pricey in helping India keep its equipment battle-ready. Says a senior source in the Indian Air Force, “Trouble happens in the event of an emergency or war-like situation. India has a comfortable near-term inventory of critical spares, but should a war happen, we will need to have spare parts on a much higher level, and this can certainly affect war worthiness of some of the aircraft in the fleet.”

The other sticking point is visas. Indian businessmen, including some top industrialists, have been denied visas for travelling on work to Russia, lately. Indian diplomats made a mention of this problem, though it is not clear whether any commitment has been elicited to sort it out. What this means is that business ties could suffer in the interim. Given the relative performance of the two economies in the recent past, this coldness on Russia’s part is rather strange.

Putin’s visit has set a brisk pace for strategic consolidation and defence exchange. In the years to come, this is one relationship that India can count on in diversifying its strategic space. What the country must watch, however, are the multi-billion dollar bills India might be handed.