Daughter of a Maoist

Terrorised by the police, bereft of parents, evicted from school—what it means to be a 15-year-old daughter of parents ‘wanted’ by the State 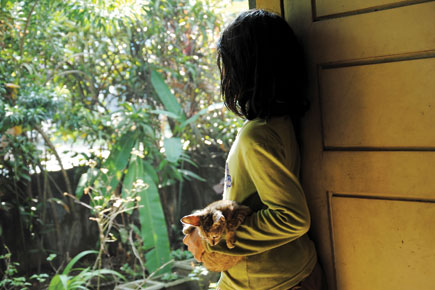 Terrorised by the police, bereft of parents, evicted from school—what it means to be a 15-year-old daughter of parents ‘wanted’ by the State


I first met her when she was around 10 or 11 months old. Her mother Shyna was a friend and source. At the time, Shyna was an upper division clerk in the High Court. She was also an activist trying to set up a trade union in the Special Economic Zone (SEZ) in Kochi. As a TV reporter, I had frequent contact with Shyna. She often gave me story tips from the SEZ, to which the media didn’t have much access. Her little girl was called Ameranta. I found the name odd. Many of our common friends thought likewise. We advised Shyna to change the name. I remember telling Shyna that when the child grew up, she would dislike this name.

After 15 years, when I met the girl, she was not Ameranta but Ami. The name was changed when she started school. The repeated advice of her friends had made Shyna do it. I asked Ami whether she knew what her former name was. She said she knew and regretted not having that beautiful name. I shrank inside and did not say anything. When I returned home. I googled the name Ameranta and read the meaning. It was the ‘flower that never fades’.

By then Shyna and her husband Roopesh had become ‘wanted’ Maoists. They had both been active in trade union initiatives and organising workers in the SEZ. Both were on the watchlist of the Kerala police and central intelligence agencies for alleged Maoist connections. Shyna and her two children, along with a group of activists from Nandigram, were picked up by the police in January 2008 following the arrest of Maoist leader Malla Raja Reddy from Kerala. Later they were released, and the couple immediately went underground.

Ami and her eight-year-old sister Savera now live in Shyna’s house at Valappadu in Thrissur district in Kerala. Shyna’s mother, who has crossed 70, stays with them and is their lone guardian. Ami is not just like any other teenager. She cares for her old grandmother, looks after her younger sister and keeps a vigilant eye over the movement of policemen who follow her constantly in either uniform or plainclothes. Last summer vacation, their parents managed to spend a few days with Ami and Savera. Since then, life has become hell for the children, with the police harassing them for information on their parents. Ami told me what it means to be a daughter of Maoists.

I was 12 years old when we were picked up by the police. I was woken up by Naina [as she calls her mother] at midnight. I saw a team of policemen in my home. I didn’t know what was going on. Papa was not at home. We were taken to the police station. Savera was only five. She had been crying constantly. She was very scared. I was scared too. There was only one wooden bench. Sleep was hardly possible. We spent the whole night in the station. Savera cried for a long time and slept early morning. We were released the next morning around 10. They gave us morning tea and a newspaper.

A few days after, they raided our house again. The principal of my school, teachers and friends came to know of the raid and our being held overnight in the police station. The principal and teachers barraged me with questions. They were not bad with me, but even so, they soon insisted that I take a Transfer Certificate. Both of us were thrown out of school. Savera was doing her pre-school and needed no such technicalities as a transfer certificate. They did not tell me anything specific, but the transfer certificate they issued said that I had been absent for 15 days. It was only a pretext. They were scared. Everybody came to know my parents as Maoists. I was sad. I had good friends in that school. Parting with them was painful. They did not give me permission to take the annual examination. We shifted to my mom’s place in Valappadu, Thrissur. I had to join the seventh standard again in another school. I was scared that the new school would also know what had happened, and I thought the students there would be harsh with me. But nothing went wrong. The school was fine.

This is only one side of the story. It does not mean that I had a troubled childhood. On the contrary, it was very eventful .I had travelled a lot with my papa and Naina. At a very young age, I went to places like Kolkata, Patna and Lucknow. My parents took me wherever they went. I was exposed to different kinds of people, languages and cultures very early in life. My parents had lots of friends; most days, they were at home. There is no one else in my class who has got such exposure. I used to tell anybody who sympathised with me about the absence of papa and Naina, that I am luckier than any other girl my age. That is the reason why I love and respect my parents. They enabled me to think, to see the exploitation in society around me.

After a long gap, I met papa and Naina last summer. We sisters went separately. It was the first week of May. I left home and joined papa. He took me to a place where Naina was. The three of us spent a few days together. When I came back, Savera joined them. On 31 May 2010, the day after I came back, the police barged into the house. It was 10 at night. There were around 20 of them. Grandma and I were upstairs. The police broke the main door and came to the first floor. Unfortunately, a friend of mine was there. He had come to give back an umbrella he had borrowed. He is 20 years old and works as a welder. The cops started to frighten us. I was grilled and my friend was also treated very badly. After an initial phase of interrogation, a few policemen took him to the station, while others continued questioning us.

They searched the house thoroughly. Both grandma and I were questioned separately. They asked me how I joined papa and Naina, where I met them. The interrogation went on till 2 am. It was a horrible night.

They turned up the next day too. I was interrogated again. This time, their ploy was different. They alleged that I am having a relationship with my friend who was picked up the previous night. A constable told me that he had described my body in detail. I tried to tell them that I had no such relationship with him. I told them I was even ready for a virginity test, but they were in a belligerent mood and not ready to listen to me. My friend later told me that they had used the same ploy with him. He was questioned the whole night and released only in the morning.

The police kept coming regularly for a week and questioning me. Two days after this incident, Savera came back. They questioned her too. They told her that they would shoot papa. Savera was scared and crying. I watched helplessly. They shouted at my grandma and asked her why she could not give poison to both of us and kill herself.

The police also visited our school and met the principal. Nobody knew there that my parents had been declared ‘Maoists’. The teachers thought my parents had separated. After the police visit, the news spread. Now everybody—teachers and students—know it. A few students keep away from us now. They are scared to talk to us. But I have very good friends in class who are able to understand. Many of them silently support my papa and Naina. We used to discuss the kind of injustice and exploitation that we see around. My generation is quite capable of understanding such problems.

I want to study well. I have a passion for electronics. I want to become an engineer. But I know life is uncertain and anything could happen tomorrow. I don’t know when I will be able to meet my parents again. It may never happen and that scares me. I am well aware that one more meeting would certainly put them behind bars.

I am worried about my grandmother too. She opted for this troubled life only for us. If we had been secure, she would have had a peaceful life in Dubai with my uncles who are all well off. I am not worried about Savera, because whatever happens, I will take care of her.

The police watch me constantly. They watch me when I step out of this gate. They follow me to school. Often, people sympathise with me and Savera because we appear bereft of parental care and love. But both of us know how much they love us. What does family mean? A unit of parents and children living always together is not the only thing that makes a family. My papa told me that they have been in this struggle so that thousands of girls like me can walk freely and fearlessly in this country. It means that they are living and working for me too. To bring about an environment in which I and my sister can cross the road and go to a neighbour’s house alone even at night. If this is the objective of their life, I support them, and I am with them.

See what is happening around us now. Women are being raped and killed in public places, even in moving trains [last February, Kerala was shocked when a woman was raped and murdered on one]. Millions of people are living in abject poverty. Why? Is it because our country does not have sufficient resources? No. It is only because of exploitation by the powerful. If we had used our resources judiciously, we would have reached the standards of developed countries like America. But it never happens. Corruption is rampant. If my papa and Naina are working against such evils, what is wrong in it? It is true that I miss them. It is true that I am worried about them. But I do not disagree with them. I am proud to be their daughter.