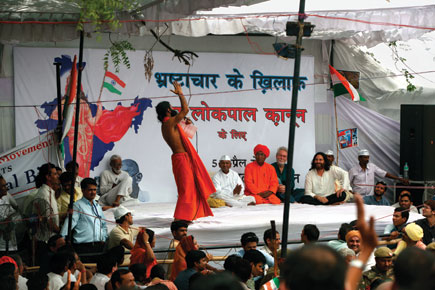 
If you saw in Anna Hazare a second Gandhi, wait for the third Gandhi. Yoga guru Baba Ramdev, who lent his highly vocal support to Hazare’s fast at Jantar Mantar, has now decided to take a cue from the Father of the Nation and begin his own fast unto death at Delhi’s Ramlila Maidan on 4 June against corruption and black money.

Like Hazare, Ramdev too has written a letter to Prime Minister Manmohan Singh ahead of his proposed fast, demanding immediate measures for bringing back black money deposited in Swiss banks, revealing account-holders’ names and banning high-denomination currency. In his letter, dated 4 May, the yoga guru has given an ultimatum of one week to the Prime Minister for taking appropriate steps against black money and corruption. ‘If we don’t receive a concrete response from you in one week we will be forced to start our Satyagraha (in the form of a fast unto death) in the interest of the nation,’ says the letter.

Ramdev’s media advisor SK Tijarawala called the proposed fast the “largest ever agitation in the history of the world which will witness the total transformation of India and will be participated (sic) by over 10 crore people of India directly” .

Ramdev’s choice of date for launching his ‘Satyagraha’ is significant in the sense that it is precisely on 4 June that Anna Hazare has planned a national convention in Delhi of all those civil society activists who participated in or supported his own anti-graft movement in the first week of April.

Now that Ramdev has announced his decision to start his fast on the same day, India Against Corruption—the platform led by Hazare—is not sure about how to hold its convention to chalk out strategy for future courses of action.

Ramdev’s choice of date is not a mere coincidence. It is well known that the yoga guru had expected some dividends for himself when he lent vocal support to Anna Hazare. And when he could not get what he wanted, he lost no time in taking a dig at father-and-son duo Shanti Bhushan and Prashant Bhushan being part of the joint committee formed to give shape to the Lokpal Bill. It is also pretty well known that Ramdev did not like Anna Hazare’s refusal to allow RSS spokesperson Ram Madhav to speak from the dais at Jantar Mantar. It was Ramdev who had brought Madhav along on the penultimate day of Hazare’s fast, and it was, therefore, the yoga guru who felt humiliated by Hazare’s snub to the RSS spokesperson.

Ramdev’s decision to launch his satyagraha on 4 June, therefore, raises a pertinent question: is Baba getting apprehensive about Hazare becoming the mascot of the campaign against corruption?

Tijarawala says, “We have talked to Anna Hazare and (Justice) Santosh Hegde. Both of them are supporting our agitation. Baba Ramdev has been supporting Anna Hazare, and he will continue to do so in future.”

Swami Agnivesh, one of Hazare’s associates, however, remains non-committal about participating in Ramdev’s proposed agitation. “I can’t speak about Anna and Hegde. They (Ramdev and Co) have not invited me so far,” he says. “As regards the clash of two events on 4 June, Delhi is a big city and we will have our convention in one of its corners independent of him,” he adds.

The issue, however, is important for Ramdev, who, after having offered a cure for nearly every health problem, has announced his intention to cleanse the political system. His organisation, Bharat Swabhiman, is not yet a political outfit, but he has let it known that he would one day turn it into a party. “We will have 7-10 lakh members in every district in a year or two. I will never contest elections and never take up any political position… The next general election will be a watershed event when all the corrupt politicians will be wiped out once the Bharat Swabhiman movement becomes a force to reckon with,” Ramdev had said, overa year ago.

A few months ago, Ramdev had entered into a skirmish with Congress leader Digvijaya Singh who had asked the yoga guru to verify the trail of funds received by him through donations. “He must understand that we are also as much against black money as he claims to be… I have only one request of him—whenever he accepts money from his disciples, he should get proof from donors that the funds received by him are not black money,” the Congress leader had remarked. The Baba went ballistic in response and almost joined hands with the Sangh Parivar to hit back at Digvijaya Singh. It may not be all that easy for Ramdev as he moves on to play out a third Gandhi on 4 June.