At a Complete Loss 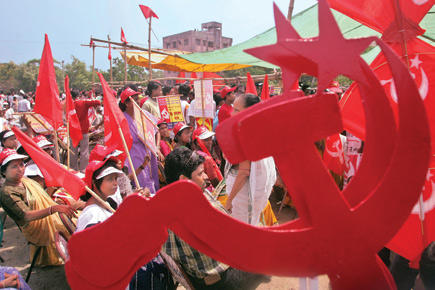 Thirty-three years of uninterrupted Left rule in Bengal has left the state’s finances in a mess.


West Bengal is on the verge of bankruptcy, and 33 years of financial indiscipline and mismanagement, populism and anti-business attitudes of the CPM-led Left Front government are to blame for the sorry mess. Bengal’s debt stands at a whopping Rs 1.96 lakh crore, its treasury remained shut for a week last month-end, and is clearing only medical bills now. Nearly all developmental projects have been halted, and even Central schemes like the NREGA, National Rural Health Mission, JNNURM and mid-day meal for school children will stand suspended because the state cannot meet its share of the financial obligations. A desperate state government, which was on the verge of being unable to pay last month’s salaries—it did so only by diverting 50 per cent of its funds meant for plan expenditure (for social sector and development projects) to non-plan uses (for payment of salaries, pensions and debt servicing)—requested a bailout from New Delhi. But the Union Finance Ministry is not making things easy for the state.

Bengal, New Delhi told the state’s Finance Minister Asim Dasgupta two weeks ago, must meet its own additional resource mobilisation target of Rs 4,575 crore for this fiscal—the state has failed to meet even a quarter of this target—and display financial discipline and prudence before it is eligible for any aid. In response, the state hiked VAT by 1 per cent to mop up Rs 200 crore, and plans to curtail Rs 1,000 crore in non-plan expenses through austerity measures that include not buying life-saving drugs for government hospitals. But New Delhi, understandably, is not impressed, given Bengal’s record of keeping promises.

Economists say that while Bengal’s revenue has declined steeply over the past 33 years, the Left Front government’s tendency to dole out largesse solely for electoral gains has cost the state dear. This continues even now, even as an ignominious bankruptcy faces Bengal. The state has just created 120,000 jobs in schools, colleges and municipalities, revised salaries of its employees and hiked dearness allowance (a burden of Rs 950 crore). “The Left Front government has always been financially irresponsible when it comes to appeasing its political constituencies and seeking to create new ones,” says eminent economist Abhirup Sarkar, who teaches at the Indian Statistical Institute. This holds true even now: while departments like health, education and the PWD are reeling under severe cutbacks, the ‘minority affairs department’ has been allocated an additional Rs 8 crore. Gimmicks like reducing state cess on petrol, diesel and LPG—in reaction to the Centre slashing subsidies on these items in 2008—dealt a big blow to Bengal’s tottering finances.

Ironically, Bengal’s finance minister is an economist of some repute—Dasgupta, who has held this portfolio for 23 years now, had taught at the Massachusetts Institute of Technology (MIT).

But consider the state’s financial decline under his watch: a recent RBI study says the state’s indebtedness, as a percentage of its gross state domestic product (GSDP), is 42.2 per cent. Compare that to  Maharashtra’s 26 per cent and Karnataka’s 25.5 per cent. Its revenue deficit (3.7 per cent of its GSDP) was the highest among all states in 2009-10. Bengal has the dubious distinction of having sought ‘ways and means advances’ (loans against pledged securities) from the RBI 38 times this year; states like Orissa, Bihar, Rajasthan and Madhya Pradesh haven’t had to resort to such desperate measures even once.

Dasgupta’s obfuscation of the obvious, say non-Leftist economists, is pathetic: he calls Bengal’s worst-ever financial crisis “only a temporary problem” and, in his budget speech this year, juggled the figures to show the state’s budgetary deficit as only Rs 114 crore when diligent accounting would have shown it to be in excess of Rs 22,832 crore. All of which put together means that whoever comes to power after next year’s Assembly polls would not only inherit empty coffers, but also a crushing debt burden. No cause for cheer for the next ruler of Bengal.