An Emergency for the UPA

How else to explain the President’s food security ordinance? 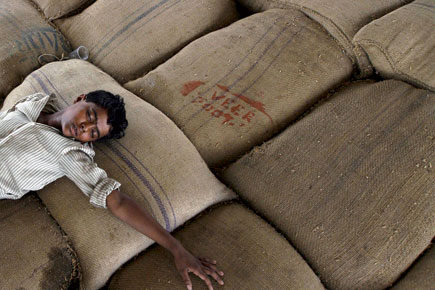 How else to explain the President’s food security ordinance?


The rains may have arrived in Delhi well in time, but the cloud over the UPA Government’s ability to push the Food Security Bill through Parliament has delayed the monsoon session, among the last few sessions before a general election is announced. It is believed that this session, which is usually a month or so long and begins in the last week of July, may now begin in the first half of August.

With time running out to implement its showpiece food policy, the UPA earlier this month chose to take the ordinance route—meant for urgent matters that suddenly arise when Parliament is not in session. The food security ordinance was notified on 8 July and the Government has six months to get parliamentary approval. The bill has been awaiting a go-ahead since 2011, and having the President issue an ordinance rather than putting it to a floor vote grants the ruling coalition extra time to start working on the logistics of implementing the ambitious programme, envisioned to cover 75 per cent of India’s rural and half its urban population. With foodgrain to be doled out almost free, at Rs 1 per kg of coarse grains, Rs 2 per kg of wheat and Rs 3 per kg of rice, subject to a monthly limit of 5 kg for every person in a household, covering 800 million people as planned would be a challenge that demands bravado.

Given the leaky Public Distribution System that is currently in place, the UPA runs the risk of reversing any political gains it seeks from its food security programme if it ends up a failure on the ground. Plans are afoot to get Delhi Chief Minister Shiela Dikshit to roll out the scheme on 20 August, the date of late Prime Minister Rajiv Gandhi’s birth.

The bill is part of the Congress party’s 2009 election manifesto, but the delay in first tabling it in Parliament (due to the coalition’s internal differences) and then the frequent disruptions in both Houses have made a mess of the process of legislation. Many bills have been left unpassed and others pushed through as enactments without due debate. While the opposition parties have flayed the food ordinance as a poll gimmick, it also underlines the UPA’s inability to gather the numbers to see it through Parliament. Earlier this year, the UPA resorted to an ordinance to amend the country’s criminal laws after protests broke out over the 16 December gangrape and murder in Delhi. Though Parliament was in session till over a week after the incident and an amendment bill had already been put up for consideration, opposition-led disruptions and the UPA’s floor failures kept the bill hanging. It was only later in the Budget session that this ordinance was okayed by Parliament.

“As far as the legality and constitutionality of the move is concerned, you can bring an ordinance when Parliament is not in session,” says Subhash C Kashyap, a constitutional expert. Article 123 of the Indian Constitution authorises the President to promulgate an ordinance in such circumstances. “But you can raise issues of propriety and misuse of power,” adds the former Lok Sabha Secretary General. Using an ordinance for a matter that has not sprung up suddenly, he says, is frowned upon in a democracy. “There was prolonged communication through letters between the first Lok Sabha Speaker GV Mavlankar and Prime minister Nehru on the issue of ordinances. In his last letter, Nehru acknowledged that the Government should be more careful in bringing ordinances. Even in the Constituent Assembly, the spirit of the debates was that [it is to be used] only if an emergent situation arises in which you cannot wait for the next session…”

In the UPA’s case, the emergency arises from the fact that it has not been able to run Parliament smoothly and the BJP has played rowdy in the Lok Sabha since December 2010. “The argument that they have not been allowed to run Parliament is a flimsy one,” says Kashyap. “The ordinance ultimately has to be [okayed] in the next session of Parliament. If the House doesn’t function again, the ordinance will become inoperable after six weeks.”

While the BJP has expressed fears in public that the Government may do away with the monsoon session altogether and call for early polls, it knows that the Congress does not stand to gain from such a move. On the other hand, when the ordinance is put to Parliament in the forthcoming monsoon session, the BJP cannot afford to be seen as disrupting the debate over a bill that it says it supports but with amendments. As for the UPA’s objectives, turning its ordinance into a law would need Parliament’s nod. Soon.