After being led by the Vajpayee-Advani duo for 40 years, the BJP faces a leadership vacuum. A look at the top contenders for the top job 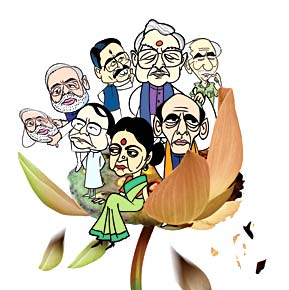 After being led by the Vajpayee-Advani duo for 40 years, the BJP faces a leadership vacuum. A look at the top contenders for the top job


THE BJP has managed to persuade Lal Krishna Advani not to remain the Leader of Opposition in the Lok Sabha, but only just. This is being seen as a move to prevent a succession battle breaking out, a battle Advani will now have to resolve behind the scenes. After being led by the Vajpayee-Advani duo for 40 years, the party faces a leadership vacuum. Here are the principal players.

As soon as the former physics professor MM Joshi, 75, reached Delhi, he restarted his efforts to replace Advani. Rather than persuading Advani to reconsider his decision, Joshi defended it, pitching himself for the job with only a fig-leaf of modesty. He openly said he wanted Advani to play friend-philosopher-guide to the party just like Atal Bihari Vajpayee—a tongue-in-cheek remark given the state of Vajpayee’s health. Joshi, who most crucially has backing from the Rashtriya Swayamsewak Sangh, is a Brahmin from Uttar Pradesh to boot. Going against him is his age. Joshi surprised everyone by calling for more Muslim candidates, indicating he wanted to shift away from the Hindutva line.

The Modi-Jaitley duo, not used to being down and out, is lying low for the moment, trying to shrug off voices that projecting Modi as an alternative PM, making him campaign extensively outside Gujarat, was a mistake. Till just the other day, until the results were out, Modi seemed to be the natural successor to Advani. Now, the untouchability of Modi is back. On his part, he now says he’s going to remain in Gujarat. But nobody belives Narendra Modi can be unambitious, especially since his fellow-traveller Arun Jaitley in Delhi is one of the tallest BJP leaders. Jaitley is young, dynamic, and credited with several state election victories. Midway during the election campaign Arun Shourie’s comment that Modi is a future PM, the BJP’s Rahul Gandhi as it were, was seen as being Jaitley’s voice. For the moment on a backfoot, the powerful duo won’t be suppressed for long.

Seen as too liberal, too inaccessible, too much of an English speaker, Jaswant Singh does not even have the Sangh’s backing. He may have won his Darjeeling seat, but the former external affairs minister is yet to shed the tag of the man who accompanied terrorists to Kandahar. Currently leader of the opposition in the Rajya Sabha, Singh is not giving up yet. He opposes Swaraj saying she is his junior. At 71, few will be his seniors anyway.

When asked if she was going to be Leader of Opposition, she said such an idea while Advani was still around was “painful”. In other words, it wouldn’t be so painful in the post-Advani scenario. Not only does Swaraj have the advantage of being a Brahmin and a woman, at 57 she also has age on her side. The days when she hurt her image as a mature politician by threatening to shave off her head should Sonia Gandhi become PM are long forgotten. She is likely to be the Deputy Leader of Opposition, clearly giving Advani some rest.

The Madhya Pradesh chief minister is the dark horse everyone is betting on these days. His primary appeal lies in being a ‘development man’ like Modi, without the untouchability and taint that a Modi still tainted by the 2002 riots comes with. Chouhan has already come out to say that the impending hanging of Afzal Guru was a non-issue, that development is Hindutva, and that the BJP’s losses in Madhya Pradesh’s Malwa region were due to the Congress launching young leaders. The hint is that Chouhan himself, at 50, is one of the youngest second-rung leaders. Whenever the issue of Modi was raised during the election campaign, Advani had given the example of Chouhan as another development-oriented Chief Minister.

At 58, Rajnath Singh is still young, and his tenure as party president ends soon, in January 2010. He has RSS backing but little else going for him. He became party president as a stop-gap arrangement when LK Advani had to resign because of the Jinnah episode. His term was then renewed in view of the coming election. With this defeat, it will not be easy for him to pitch for the president’s post again, leave alone claim succession to Advani.