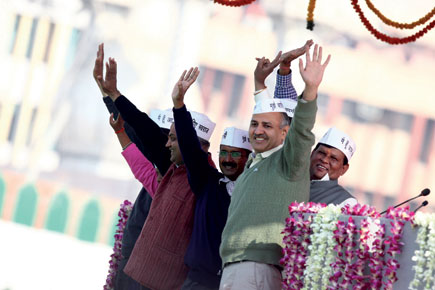 The flux of expert opinions on the Aam Aadmi Party (AAP) perhaps resembles the march of termites out of the woodwork after rain. If nothing, it is fun to watch, and worthy of a subhead1 documentary. These sober-looking creatures of the political kind certainly deserve praise for being largely uniform, and for moving in rhythmic cadence like soldiers before a roll call.

Alright, let’s cut to the chase: the intelligentsia, 24X7 television channels and the rent-a-quote mob are engaged in endless post-election analysis of the Delhi Assembly results that gave AAP 29.5 per cent of all votes and power to its pivot, Arvind Kejriwal. According to them, a Kejriwal avalanche is waiting to hit the political landscape in less than 100 days, and the contest has narrowed down to a two-horse race—between the BJP prime ministerial nominee Narendra Modi and the Delhi Chief Minister.

Of course, there cannot be any quarrel with the assessment that the aam aadmi ring to the Delhi victory has spurred the hope that Aaya Rams need not necessarily be replaced by Gaya Rams. And the audacity with which AAP pulled off the numbers has strengthened the belief that there could be a real break from traditional collusive politics. The average citizen, frustrated with spiralling prices, an indifferent system and thugs in top positions, now seems to believe that he, too, can do it.

To that extent, the AAP, in varying degrees, is a threat to established players: the idea has the potential to challenge vulnerable politicians, reality-challenged political parties and inefficient state governments.

The AAP is also gaining from the desire of Left and liberal opinion to see the BJP fail and Modi’s electoral project thwarted. A lot of intellectual energy is being expended in the expectation-enterprise of Kejriwal replacing Modi as the main talking point of political discourse in the run-up to the 2014 Lok Sabha polls.

The ‘media-tisation’ of politics—something that was evident largely in the West—is certain to help AAP in this perception war. With the homogenisation of aspirations, the media has acquired a role in shaping the preferences of the electorate. By all accounts, AAP is their current favourite, and in the coming electoral combat, Kejriwal will have media wind behind his back.

The new party is also fortunate to have got its Delhi mandate so close to this year’s Lok Sabha election. Before it faces routineisation or failures in Delhi, the next round of polls will already be underway across the country. The party will have the benefit of doubt and even a defeat will not be shown up as a failure.

The fascination of techies, academics and the glam crowd with this new idea has helped those spinning the impression that the Delhi debutant has already emerged as a significant force in the nation’s polity. Newspapers and TV channels routinely carry reports of AAP’s mushrooming across the country. And its backers are not willing to let details come in the way of their claims and theories. Structural and strategic issues that play a central role in national elections are naturally inconvenient and hence brushed aside.

Now, let’s face it: AAP’s electoral gains came from the central and eastern parts of the city state that accounts for just 1.4 per cent of the country’s population. It threw out the Congress from Delhi’s municipal area, which was the epicentre of the middle class anti-graft movement. But when the battle terrain moved towards the suburbs that mimic the electoral behaviour of geographically contiguous states, AAP failed to make an impact.

To the discerning, there are three clear pointers. One, while Delhi’s municipal area—Kejriwal’s main staging post—got swayed by AAP, the territory beyond the municipal limits had a different electoral story to report; in these outlying parts of the city state, the BJP secured over 14 per cent more votes than AAP did.

Second, a national conquest will require AAP to build an organisation and leadership that can credibly challenge established players. With a general election barely three months away, this looks an impossible task. And if the current political movements are anything to go by, only those occupying balcony seats and those discarded by established players are crowding around AAP’s leadership table in state capitals. This may not be enough to challenge the clout over the electorate of Modi, Shivraj Singh Chauhan, Raman Singh, Mamata Banerjee, Naveen Patnaik, Jayalalithaa, Nitish Kumar, Mulayam Singh and Mayawati.

Third, early estimates suggest that AAP could end up hurting the Congress as its focus could remain on allegations of corruption under its charge. This has been forecast by numerous pundits.

Pradeep Chhibber, political science professor at University of California, Berkeley, has listed reasons why AAP will hurt the Congress more, robbing the GoP of India of its centrist narrative.

In fact, the Congress, which is offering external support to Delhi’s AAP government, will not be in a position to pull down Kejriwal and will be forced to put up with his reckless populism and adventurist governance. Delhi’s Chief Minister can be expected to use this latitude to cement his hold over the city state.

On the national stage, Kejriwal will be contrasted with Modi. Although the BJP’s prime ministerial aspirant is indeed part of the political establishment, he has been successful in projecting himself as an ‘outsider’ who has the wherewithal to challenge the status quo and steer India out of its political and economic gridlock. As Modi suggests, he truly stands outside the ‘elite’ intellectual-bureaucratic-political circles that tend to dominate Delhi’s hot house discourse.

Modi, by all estimates, has recharged his organisation, and even those who have traditionally been in lockstep with the Government at the Centre have broken off to back the BJP’s candidate.

Can AAP be a contender for power at the Centre? Senior BJP leader Arun Jaitley is of the view that ideology and an agenda of governance are critical for the forward movement of any party. “AAP was born on an angry vote. What is on display now is an attempt to convert populism into an ideology and a governance model. It is already being pulled in different directions. The anarchists and Maoists in the party are seeking a referendum on every important issue—the deployment of security forces in border areas and [the country’s] approach towards Red terror,” says Jaitley.

The Congress appears to be looking the other way on dealing with AAP, which is running Delhi with its support. Leaders like Jairam Ramesh have been urging the party’s top leadership to work out a cogent strategy to deal with AAP. According to him, AAP is just a platform and not a party. But the platform has begun to challenge the leadership with attacks on people close to its First Family.

It would be complacent on the BJP’s part to ignore the AAP challenge. This is because AAP is hogging a significant part of the mindscape of the very voters BJP is banking on and who have lost faith in the Congress—the middle-class fed up with graft and inflation who believe they and India deserve better. For this, the BJP would do well to establish itself as India’s primary change agent.

AAP’s own sympathisers concede that Kejriwal will have to credibly manage the expectations of Delhi’s people. “His image is that of a determined defender of the aam aadmi. But he will have to work out a list of things that can be done. If he holds a janata durbar in an open stadium, he would be flooded with thousands of demands. It won’t be possible to regularise 80,000 contract employees with the stroke of a pen. If he fails to manage the expectations of people, disillusionment will set in and defeat the AAP idea,” says an AAP sympathiser who does not wish to be identified.

While optimism is often an adrenaline shot in politics, a Kejriwal meeting with controversial Muslim clerics such as Maulana Tauqeer Raza Khan, known for issuing anti-women fatwas, or a Yogendra Yadav trying to forge a non-Jat caste-oriented alliance in Haryana—or similar efforts—may not help the so-called aam aadmi that AAP represents turn into a superman who can stop a juggernaut in motion.

As with experts, crawling on to the next preoccupation comes so easy.