A Nation without Hangmen

India does not have a single active hangman today. Which should not be surprising; 300 prisoners are awaiting death. 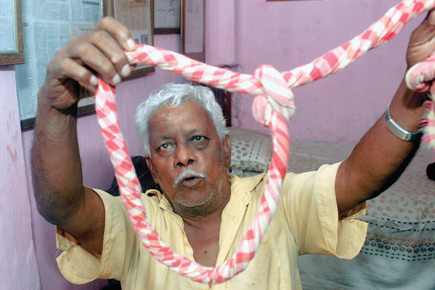 India does not have a single active hangman today. Which should not be surprising; 300 prisoners are awaiting death.


In Pune’s Yerwada prison, there are 11 convicts who have been condemned to death by hanging. Kept in solitary confinement in the barracks close to the gallows, some of them have languished there for nearly a decade. Their mercy petitions have been rejected by the President. But it is unlikely that they will be hanged anytime soon. Maharashtra does not have a hangman. The two prisons in the state where hangings are carried out—Yerwada and Nagpur Central—have sought executioners from other states but no one has responded. It seems there are no hangmen in the country. They are all retired or dead.

To kill a man, the Indian Government pays Rs 150. The job of a hangman is not a full-time government post. He is a sanctioned volunteer, his pay a special allowance. Hanging involves techniques and procedures very simple to learn, simpler than probably learning how to drive a car. Senior police officials are willing to teach them to anyone who comes forward, but no one does.

Officials at various central prisons across India confirm that they are unable to find hangmen even though the candidate need not have any previous experience, nor does he have to be literate. It is a strange situation in one of the few countries in the world that still have capital punishment. India has about 300 prisoners on death row. Of these, 26 have petitioned the President seeking clemency. The rest are fated to hang.The job is reserved only for men. In fact, there are only two qualifications a hangman needs—he has to be an adult male, and he has to be over five-foot-four-inches tall. The job demands strength and unwavering focus. It is not for the faint-hearted. A hangman cannot have second thoughts before he pulls the lever.

If a hangman is found, jail officials would teach him how to tie the noose and train him to maintain the correct posture while hanging, as this is vital. But the toughest part of the job is not about ropes and levers. It is about conscience. “The moment a hangman starts thinking about karma, he should be retired. Till the lever is pulled, the prison officials are on tenterhooks as you cannot say how the hangman will react at the last moment,” says a former inspector general of police (Prisons).

Maharashtra’s last hangman Jadhav retired in 1995. Since then, there have been no takers for the job. Nobody knows where Jadhav is today. A policeman says that he was a reluctant hangman, extremely remorseful about his job.

The last hanging in India was conducted in 2005 when child rapist Dhananjoy Chatterjee was executed by the 87-year old hangman Nata Mullick in West Bengal. Mullick, whose father Shibal Mullick was a hangman in the British colonial days, died in December 2009 after 25 hangings. Speaking to Open a few months before his death, Mullick said hanging was an art, and he had developed his own methods. “The preparation of the noose is very important. If the noose is right, the person will feel less pain. I used fewer knots when a prisoner was heavy and more knots for a prisoner who weighed less. If the lever is pulled too hard the head can be severed.”

According to Mullick, every hangman applies his own ingredients to the rope to make the hanging “easy and successful”. He used to apply soap and ghee to the rope. Once the rope was fixed to the gallows, he would apply a squashed banana to it. “My father had discovered that if these ingredients are applied to the rope, the hanging will be smooth. I have seen him doing it when I started assisting him, when I was about 15 years old. I would tie the hands of the convict and put the hood on his head. My father pulled the lever.”

Mullick passed on his wisdom to his grandson, Prabhat. Prabhat is yet to be formally inducted as a hangman. The matter has been delayed in bureaucratic tangles. “There are procedures to be followed. This is not a legacy that is handed over. It is a government job,” says an official of the Central Jail Authority.

In Madhya Pradesh, Balkrishna Valekar had expressed a desire to hang Afzal Guru, condemned to death for the Parliament attack. But Valekar died last year. He was 82, a veteran of 11 hangings.

Tihar Central Jail in Delhi, too, is looking for a hangman. The last hanging there was in 1989 when Satwant and Kehar Singh, convicted in the Indira Gandhi assassination case, were hanged by executioners Kallu and Fakira, in separate hangings. There are no gallows now in Tihar. With death sentences piling up, jail authorities are planning to reinstall the gallows. However, they have not been able to locate Kallu and Fakira.

Kallu’s son Mammu Singh worked as a hangman in the Meerut Central Prison. He has hanged ten, the last in 1997. In 2001, Singh was arrested by the Uttar Pradesh Police for defaulting on loan payments. When he emerged from prison, he got his job as hangman back. But he has retired.

The retirement age for a hangman is 58. Since it is difficult to find a hangman, the retirement age is officially extended. So, hangmen who describe themselves as ‘retired’ have retired voluntarily, choosing to end their careers. According to Tihar sources, Mammu Singh might still be available on special request, but this could not be independently verified. Singh’s old colleague Mohammed Ahmed lives in Lucknow and has reportedly vowed that he will not tie another noose.

The post of a hangman has been lying vacant in Bihar since 1995. The Bhagalpur Central Jail, the only prison in Bihar equipped with facilities for hanging has placed a request with the state for a hangman. The Haryana Subordinate Services Commission has advertised for a hangman following a requisition sent by the state’s jail department, which has been without a hangman since June 2005, when executioner Vijay Singh died.

Prison officials in Maharashtra say that their personnel are equipped to ‘handle’ the situation if the eventuality arises. However, despite their boast, the fact is that nobody in the police department has the experience to hang a convict. Also, even among educated police officers, there are many myths surrounding the job of a hangman. They include death by leprosy and in other painful ways, being deformed in the next birth and being haunted by the soul of the dead prisoner.

In a prison, the office of the hangman is usually close to the gallows. A sloping passageway connects the top of the platform of the structure to the ground. The accused is made to walk the passageway, which is approximately 20 feet long, to reach the gallows. His face is hooded and hands tied behind him. It is only a minute’s walk, but the convicts are usually paralysed with fear and are unable to walk.

At Yerwada, before going to the gallows, the death row inmate is shifted from room to room six times, with the last room closest to the gallows. After that, it is the final walk.

On the day of the hanging, the prisoner is woken up at 5 am, given tea and asked to read a holy book of his choice. The last wish of the prisoner is asked a day earlier and efforts are made to fulfill it. The common wishes are for religious scriptures, pictures of or meetings with family members, and favourite foods (a vast majority choose non-vegetarian biryani). Jail officials say that the last wishes are usually very simple, as prisoners are unable to think coherently.

When a prisoner is hanged, “none of the personnel authorised to observe the hanging keep their eyes open. It is a gut-wrenching sight,” says a senior prison official. Often, death is instantaneous. It is also almost never by asphyxiation. Death is usually caused by the neck snapping. Minutes after the hanging, the noose is loosened and the body falls more than 15 feet into a pond. A team of doctors wait below to certify him dead.

Article 72 of the Constitution bestows upon the President the right to clear or reject the death penalty. The last President who diligently performed this function was the late Shankar Dayal Sharma. He cleared the highest number of pending files during his tenure. His successor, the late KR Narayanan, did not clear a single file during his five-year term from July 1997 to July 2002.

According to the norms laid down by the Code of Criminal Procedure, 1973, a manila rope one inch in diameter and 19 feet in length is to be used for hanging. The strength and capability of the rope should be tested in the presence of the Jail Superintendent a week before the hanging. It is then kept under lock and key. On the evening prior to the execution, the rope is tested again, by suspending to it a sack of clay equal to one and a half times the weight of the prisoner and dropping the sack to the exact distance of the final drop. Mock hangings are done three or four times before the actual hanging.

The procedures are all in place. What the Government needs is a hangman.