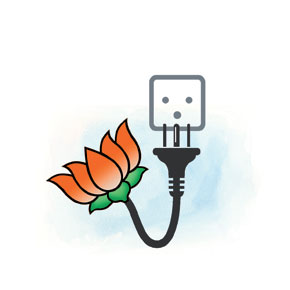 An NDA government wasn’t going to be a surprise to most people but that the BJP would get an absolute majority on its own was not anticipated. The road to Delhi was a campaign of almost military precision on numerous fronts, from mobilising grassroot workers to roping in big business to whipping up fervour on social networks. A political landslide in the Hindi heartland was the only way BJP’s Mission 272 could be achieved, and it swept UP, Bihar, Madhya Pradesh and Rajasthan.

At the beginning of the year, the Aam Aadmi Party was in power in Delhi. Arvind Kejriwal, the party’s leader, took an apparently calculated risk when he resigned after 49 days. His strategy to use the General Election as a springboard worked marginally in Punjab. In Delhi, AAP didn’t get a single seat in the Lok Sabha polls. All the anti-establishment frenzy his party had whipped up boosted the BJP’s tally.

The Birth of Telangana

After a decades-long struggle, Telangana separated from Andhra Pradesh on 2 June 2014, becoming the 29th state of India, with K Chandrashekar Rao, the leader of the Telangana Rashtriya Samiti, becoming its first Chief Minister. In Seemandhra, Chandrababu Naidu of the Telugu Desam Party managed to stave off Jaganmohan Reddy of the YSR Congress to become Chief Minister. With Hyderabad no longer part of the state, Seemandhra zeroed in on Vijayawada as it new capital.

An indication of change came when one of Modi’s first decisions was to scrap Groups of Ministers, and later, bodies like the Planning Commission. He also began to oversee the details of his ministers’ work via e-governance applications, and extended his frenetic campaigning to foreign visits. He also had to contend with controversies caused by ministers like Sadhvi Niranjan Jyoti and Smriti Irani, needless distractions from governance.

Nitish Kumar will not admit it even now in public, but his decision to break away from the BJP after successfully co-ruling Bihar together for over a decade has been disastrous for him. When his party, the Janata Dal United, won just two seats of Bihar’s 40 in the Lok Sabha polls and the BJP alliance won 31, Nitish immediately resigned as CM, taking moral responsibility , and appointed Jitan Ram Manjhi, a Dalit, to the post. It was an obvious attempt at realigning his party’s caste bank because the state goes to polls next year and he doesn’t have much time. That a man who could have given Bihar a development makeover should have to take recourse to vote bank politics is fraught with irony.

The Fall of Jayalalithaa

Soon after the General Election, when AIADMK won 37 of Tamil Nadu’s 39 seats, it seemed J Jayalalithaa was at the peak of her power and destined to remain there for the forseeable future. The opposition DMK was in shambles. Its leader Karunanidhi was all of 90 years old and his sons were in an open war to inherit the party. Her popularity in the state only seemed to be rising. And then in September she was convicted in an 18-year-old corruption case and had to step down as Chief Minister. What is worse is that she can’t hold any political post for 10 years. She manage d to get bail, though, and still controls the state through a puppet CM.

The Not so Grand Alliance

Old cow belt adversaries—Samajwadi Party’s Mulayam Singh Yadav, Rashtriya Janata Dal’s Lalu Prasad and Janata Dal United’s Nitish Kumar— buried hatchets going back decades and decided to form a common front against the Bharatiya Janata Party. For now, they say they will work together against the Government and might form a united party at some point. As of now, it seems like a mini-Third Front, an experiment with no great political successes in the recent past.

A disastrous interview with Times Now during the election campaign put India face to face with Rahul Gandhi’s weakness. His aloofness was apparent; when he was challenged, he seemed clueless. The Congress too seemed to have given up midway, but being ineligible for the Leader of Opposition role with 44 seats was still a shock. The party was in denial: a post- poll committee to analyse the defeat blamed neither him nor Sonia Gandhi.

Number of locations where Modi addressed rallies in 2014. In campaign season, he held 440 rallies with Chai Pe Charchas in over 4,000 places

The number of Assembly seats won by the BJP in Maharashtra in the 2014 state polls. No party had secured more than 100 seats in the state’s elections in the previous 24 years