In the summer thriller of 2014, history sets the stage for India to choose between the fatal and the fabulous. 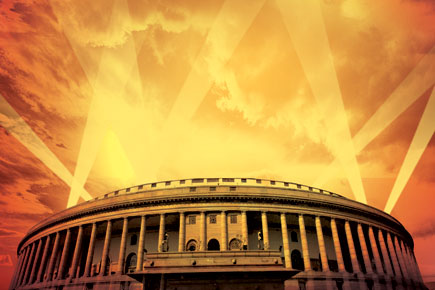 In the summer thriller of 2014, history sets the stage for India to choose between the fatal and the fabulous.

There comes a moment in the life of a nation when the sound of change is no longer the oldest cliché inpolitics. A moment when usurpers and outsiders come from nowhere and steal the argument. India 2014, currently the stage for one of democracy’s biggest passion plays, is having such a moment. It is not a sight that you will find so easily anywhere else in the world: the size, the sweep, and the voices are uniquely Indian. Here, every idea in the book of salvation is at play. Every variation of the redeemer is on display. So take your pick. The leader in starched—and lately soiled—cotton, his steps tentative, could be the onewho embodies the squandered legacy of freedom. The princeling, angry and meditative in equal measure, could be the one who brings a qualitative shift in the oldest political tradition of the country. Out there, the man selling the future to a frenzied crowd could be the Indian Right’s last hope. The little man with the big idea of you-are-the-government could be the revolutionary India can do without. There are more, more than you can count: the sub-rural socialist, the Marxist who lives outside history and who has nothing at stake except the Book, the provincialist whose idea of the world is smaller than his shrinking constituency, sub-nationalists and other sundry practitioners of kitsch. When India prepares to make up its mind, choices are exhaustive as well as exhausting.

Still, India 2014 is different from India 2009 and India 2004. Five years ago, it was not a vote for change; it was a vote divided between defeatism and dutifulness, and the latter prevailed. The BJP, even after five years in wilderness, was incapable, both biologically and ideologically, of coming to the real world of twenty-first century India. Its prime ministerial candidate was out of date—and out of place. The winner, the dutiful Prime Minister, was then learning to be a leader. The Chosen One of 2004 became the Elected One of 2009 because, towards the end of his first term, he reached belated political adulthood after outwitting the Marxists. In India 2004, it was the end of an experiment; it took only five years for the Indian Right to undo a historic shift in politics. A decade is a long time in politics; it could have seen a nation transformed, a ruler reborn—or an opportunity wasted. For India, in retrospect, the abiding theme of that lost ten years was the Great Hurt.

India 2014 is all aboutreclamation. The absence of leadership has never been as visible as it is in the dying days of Dr Manmohan Singh’s government. He could have been the moderniser India was waiting for; he could have been the bestselling moderate in an India of political extremities; and he could have been the ideal apostle of a free market. His second term could be summed up best by that famous line about the former British prime minister John Major: he is in office but not in power. While in office, Dr Singh declared independence from his own government, as if he was not part of the Cabinet that starred in some of the biggest scandals of our time. Few men worked as hard as Dr Singh to unmake their own legacy. The erstwhile market liberator is walking towards that realm of irrelevance reserved for leaders who missed history, and the India he leaves behind is a country that is desperate for a leader whose ideas are in tune with the attitudes of India. A leader who can sell a dream to an India that is growing demographically younger.

India is focused on three men who want to be that leader, and the first among them— and the most kinetic of them all—is the most captivating politician of our time. He divides the mind and unites the base; he is feted as well as feared. Narendra Modi began hiscampaign for India more than ten years ago, in the flaming backdrop of Gujarat 2002. India’s most popular prime ministerial candidate (according to various opinion polls) is a study in the power of ambition—and of ideas but not ideology in spite of the House of Saffron he comes from. The frontrunner’s candidacy is an outsider’s triumph in a country where the culture of entitlement runs across the political spectrum. With his winning economic argument, Modi could regain the lost space of the Indian Right. On the other side of the aisle is the philosopher prince whose campaign is not a struggle for power but a meditation on power. Rahul is a different kind of Gandhi, and even as he tries to comprehend this “beehive” nation, his own party struggles to translate his soliloquies on power. Let India wait, Rahul has to keep the Dynasty alive. And the third man, the street fighter, is one without doubts; he is the righteous one, and his certainties are as frightening as his idea of India—a People’s Republic ruled by a few lofty men. India of the moment may not be the ideal state for a revolutionary; it certainly is the place for a leader who can converse with the future.

Every future is fabulous, wrote the novelist Julio Cortázar. In the summer thriller of 2014, history sets the stage for India to choose between the fatal and the fabulous.