Girish Karnad turned the mythical and the historical into the contemporary 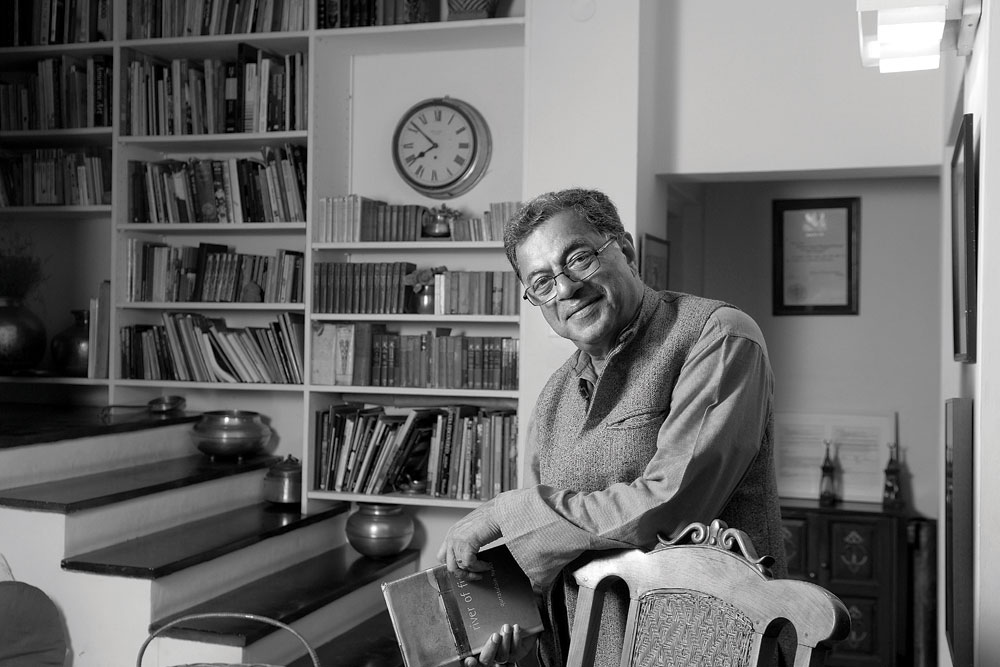 GIRISH KARNAD’S first play Yayati (1961) with its plot line taken from the Yayati-Puru myth from the Mahabharata but with all major characters speaking in the language and images of French atheistic existentialism was perceived as a weakly constructed, somewhat wordy play, but nevertheless a powerful one. What was remarkable was the clarity (which could be disturbing) with which the young playwright could unmask the mixed, irrational and self-destructive motives which made human beings act as they did. Did Yayati the father merely want one more bout of youth to experience everything? Did Puru merely want to live in bad faith by exchanging his youth with his father’s old age? Was the tamasic nature of Sharmistha more authentic than Devayani’s shallow morality? For a generation of young Kannada readers initiated into the angst of modernity by Shantinath Desai’s Mukti and UR Ananthamurthy’s short stories, Karnad’s play seemed contemporary despite its puranic garb.

Not many readers needed the blurb of the English translation to remind them that Tughlaq (1964) was about the disillusionment of the Nehruvian (post- Nehruvian?) era, or that Tale-Danda (1990) had at least one layer of meaning on the ‘conditions of its possibility’, namely the Mandir-Masjid turbulence. What fascinated Karnad’s readers was the refusal of these plays to convey a politically correct message. Was Tughlaq a cold-blooded scheming murderer or was he a political chess player who had to remove a few inconvenient pieces on the chessboard to move ahead with his unconventional experiments in politics? Or was he an anguished poetic soul accepting man’s isolation in an absurd universe? As it happens in the wonderful folk performances like Yakshagana, every staging of his plays comes out with a novel interpretation.

This was painfully true of Tale-Danda , a play about Basava and his times. While all else yields a ready interpretation, Basava’s reaction to the planned inter-caste marriage remains complex and ambivalent, teasing out all kinds of responses. Was it a case of the followers overtaking the leader and pressing him to accept the logic of his own revolutionary preaching? If Basava believed in annihilating the caste system here was the means, a marriage between a Brahmin girl and a Dalit boy, which had all the potential to herald a revolution. Why should Basava think that the time was not ripe for such a thing? Or did he foresee the violence which would bring about the end to the movement of Vachanakaras? As Karnad himself elaborated with a telling metaphor, the Kannada mind shall be returning to the 12th century like the tongue returning to an acting tooth, unable to explain what Basava thought about it all. Turugahi Ramanna says in a vachana ‘Basava went to ‘Kallige’’ and Basava’s wife says in another vachana that she would rather remain where she was. Perhaps what fascinated Karnad was the ultimate elusiveness of history, the slippage of its intended meaning. This remains pervasive in his plays.

There have been many discussions on Karnad’s plays in the context of the movement known as ‘Theatre of the Roots’ which was proposed by the likes of Suresh Avasthi and supported by the Sangeet Natak Akademi. This was a call to Indian dramatists to decolonise their craft by moving away from the modular forms taken from European theatre and to anchor the plays in the traditions of the performative arts of India such as Yakshagana in Karnataka, Jatra in West Bengal and Nautanki in the north. The Theatre of Roots movement did lead to powerful (and colourful) plays in many bhashas. Karnad’s play Hayavadana was seen as a modern-day classic in this tradition. It also proved to be a huge popular success in many languages. However, this play was not about a return to the roots. It was very modern (I would say post-modern before the term became common) which carnivalised many foundational beliefs about the self, intellect, the body and love. Karnad thought that in the play he was returning to the world of folk performances, deities and demons which had shaped his imagination in Sirsi (Karnataka), as a young boy. The play brought to the Kannada stage a different version of the Brechtian theatre.


What fascinated Karnad was the ultimate elusiveness of history. This remains pervasive in his plays

Karnad was not in my view a product of the Theatre of Roots. Kannada drama and theatre had already gone through many avatars from the days of professional (company) theatre to the modern proscenium theatre. Karnad brought to it impeccable craftsmanship which in turn was a product of his endless experimentation and innovation. No two plays of Karnad are similar in structure. Among Kannada playwrights, Karnad is the most versatile in using all the potential of theatre as a real space and also a space in the imagination. Nor is this only a matter of clever craftsmanship. It is intimately related to Karnad’s understanding of life. He does not see life as a sequence of logically predictable events. In most cases it is the unpredictable, the unsought for which happens. Take Tughlaq. The grand plans of Tughlaq turn out to be absurd. His rationality is based on irrational instincts. When he becomes the cause of the killing of his lookalike Shaikh, he tries to rationalise the act as punishment to a potential opponent. His plan to introduce a new currency is far ahead of his times, just as the other plan of shifting the capital to Daulatabad is. Both are eminently rational except that they do not make allowance for the cost they force upon ordinary individuals. Karnad is at his dramatic best when he makes Aziz the inverted mirror image of Tughlaq. This small-time thief has benefited from every political move made by Tughlaq. He exploits them so logically that his actions show up the absurdity of Tughlaq’s actions.

As UR Ananthamurthy pointed out, the extraordinary power of the play is such that it shows how everything that is ‘for’ turns out to be ‘against’. This makes Karnad’s plays ‘readerly’ in the sense that they do not impose one acceptable meaning blocking out others. They have not been exhausted by hundreds of highly original interpretations by some of the finest directors of our time. From the majestic staging of the play at the Red Fort by the legendary Ebrahim Alkazi to the innumerable performances in many Indian languages, Tughlaq has been in living dialogue with various audiences. But it still retains its potential for yet another novel interpretation.

Nagamandala subverts all received notions about chastity and celebrates a woman’s sexuality. But it also leaves unresolved many questions about man-woman relationships. In its comic, Brechtian style Hayavadana demonstrates the impossibility of integrating the body and the intellect. In a way it ends where it begins with the sutradhara ’s comments on why we worship the elephant-headed god Ganesha. The god is an embodiment of the essential incompleteness and imperfection, which is the fate of human beings.

In an extraordinary scene in the play, the sleepy, yawning goddess watches Padmini deliberately transposing the heads of Kapila and Devadatta hoping that she will find the perfect man with Kapila’s body and Devadatta’s intellect. The all-knowing goddess smiles at the ambition of poor mortals to find perfection. The denouement of the play shows how this scene will never succeed. The play enacts this theme through the main plot of Padmini, Kapila and Devadatta and through the sub-plot of Hayavadana, the elephant-headed man.

It is extraordinary how Karnad’s preoccupation with the incompleteness of man blended with an equally profound notion of the ‘segmented’ nature of history. Whether it is the medieval age of Tughlaq or the 12th century Basavanna or the time when the Vijayanagara empire collapsed, Karnad sees these ‘moments’ in history as fraught with many ambiguities. They are in themselves theatres of violence and power. Like Foucault, Karnad the playwright sees power as all-pervasive, controlling even in the most intimate family relationships. But there is no ‘safe’ point outside power.

His last play Rakshasa Tangadi demolishes the communal histories of Vijayanagara by making it a play about power. Power is also the nemesis which catches up with the pride of Ramaraya and the selfishness of his brothers. Ramaraya walks into the enemy trap blinded by his illusions of power. The beheading of Ramaraya reminds one of the beheading of Macbeth—both are ambitious men, blinded by power, who bring destruction on themselves.

In his last years, Karnad was hounded by the right wing for speaking his mind on the communalisation of history and irrational subnationalism and linguistic chauvinism. No wonder, like the best Indian writers, Karnad often faced their wrath.

In retrospect, Karnad seems to have been one of the most gifted members of a generation of writers who had come out of the euphoria and easy idealism of the freedom struggle and were confronting the realities of a post-colonial society, unable to modernise itself, partly still living under the shadow of the past, troubled by the failure of the political regime. Collective failures had made writers turn inward to explore the ambiguities of the human self. However even while responding creatively to European modernism these writers never stopped examining the myths, history and living memories of communities.

Vijay Tendulkar, Karnad, Chandrashekhar Kambar, Mahesh Elkunchwar all wrote about feudalism, patriarchy and the sham of middle- class morality. With them Indian theatre came of age. They took care to see that the use of indigenous folk forms in the theatre would not entail nostalgia and self-deception. Among them Girish Karnad had the philosophical robustness to foray into myth and history only to make them contemporary. It is this commitment to the present which made Karnad’s mythical, historical plays commentaries on post-Independence India.