Enlightenment in the Gobi Desert

Amidst the India-China standoff elsewhere, art unites the two countries on the Silk Road. Nanditha Krishna looks at the Grottoes of a Thousand Buddhas to realise how civilisation is a unifying force even in the time of adversity 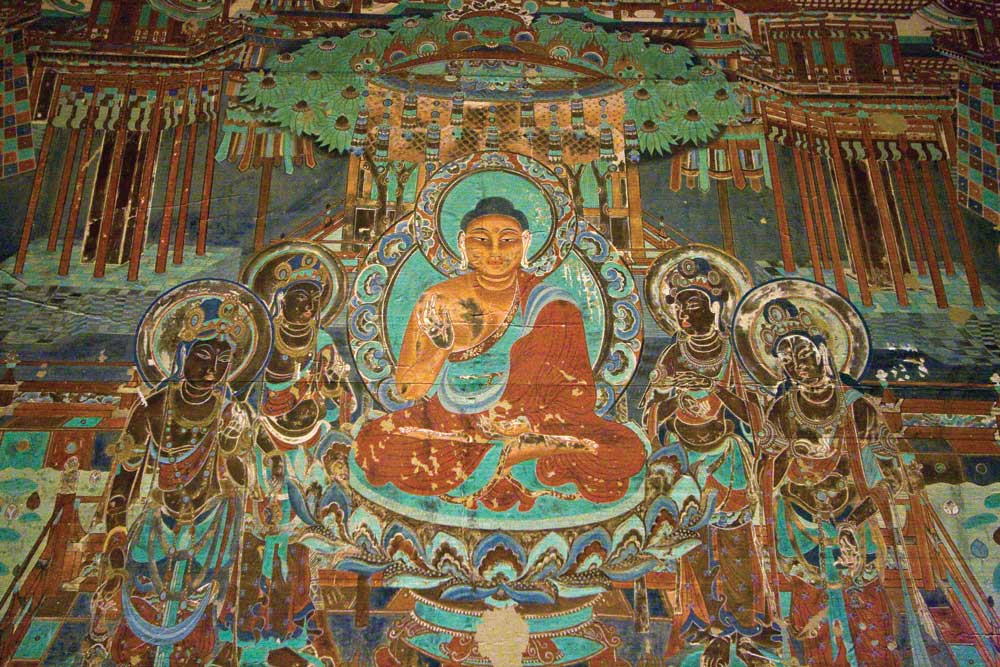 I STOOD ON THE Silk Road surveying the endless Gobi Desert, where sand dunes stand twenty metres tall, surrounding Tanhe Fenquixian, a man-made lake. Dunhuang is situated in an oasis. It is here that the Hans first built a Great Wall in the third century BCE, using local sand and weed, long before the better-known Ming wall of Beijing. In 1904, the explorer Sven Hedin entered the Jade Gate in Dunhuang, a sentry tower named after the jade traded in the region. It was a battlefield where the Hans fought Mongols; where traders ferried their wares on camels to and from the imperial court in Beijing; and where Indian monks brought the Buddha’s teachings.

As India and China stand eyeball to eyeball in yet another stand-off, it is hard to believe that the two countries were once good friends, exchanging cultural and religious ideas. We all know the names of Hiuen Tsang (629-645 CE) and Fa Hien (399-412 CE) from China who visited India. But we are barely aware of the Indians who visited China to teach the tenets of the Buddha: Dharmaraksha, Dharmakshema (author of Saddharma Pundarika, one of whose chapters became the Guanyin jing or Avalokiteshvara sutra), Gunabhadra (who translated the Lankavatara sutra into Chinese), Gunavarma, Amoghavajra, Dharmamitra, Dharmagupta and Kumarajiva, among others. Many of them resided partly or wholly in Dunhuang, an oasis strategically located on the Silk Road in the Gansu province of China. It was known as a gateway to the west, from where Indians started the long journey to the Imperial Court at Beijing. Situated at the intersection of the northern and southern silk roads, Dunhuang became a key base for water and food supplies for caravans that passed through the city before setting out on the gruelling trek across the desert. Not far from the remains of the first Great Wall are the Mogao Caves, once a bustling Buddhist monastery. The Mogao Caves are also known as the Grottoes of a Thousand Buddhas. There are 492 temples 25 km southeast of the centre of Dunhuang.

Indian influence is clearly apparent in the Mogao caves at Dunhuang, which is not surprising if we consider that there is a monument to the white horse of Kumarajiva, the Buddhist monk for whose capture Emperor Fu Jian sent a general and 70,000 soldiers to Kuca (the ancient capital of Turkestan, modern Xinjiang). Emperor Dao Wu threatened to fight Juqu Mengsun of Liangzhou for the monk Dharmakshema: Juqu preferred to die along with the monk. Such was the demand for Buddhist teachers who came from Kashmir, Magadha and South India, that they were installed as ‘imperial gurus’.

The first cave here was built by the monk Lezun in 366 CE and the last in 1277 CE, when Mogao sank into oblivion following the Mongol conquest till, in the 20th century, the monk Wang Yuanlu discovered a walled area behind which was a small cave stuffed with over 50,000 manuscripts dating from 406 to 1002 CE, including old hemp paper scrolls in Chinese, Sanskrit and other languages, paintings on hemp, silk and paper, damaged figurines of Buddhas, and Buddhist paraphernalia. The subject matter of the scrolls covered Buddhist sutras, commentaries, prayer books, Confucian works, Daoist works, Nestorian Christian works, Chinese Government documents, anthologies, glossaries, dictionaries and calligraphy. Wang sold the majority to Aurel Stein in 1907 for a mere £220.

The earliest paintings in Mogao belong to the Northern Liang period of the Sixteen Kingdoms with distinctly Indian features: brown-skinned and large-eyed Buddhas, Boddhisattvas and monks, with long ears, curly hair and sharp noses

The Mogao Caves are better known for their exquisite paintings. Since the clay of Mogao was not suitable for sculptures, the monks decorated the caves with nearly 2,400 stucco figurines and 45,000 sq metres of frescoes. People and gods, Buddhas and Boddhisattvas, events in the life of the Buddha, Jataka tales and sutras, apsaras, animals, birds and the heavens adorn the walls in rich frenzy, as in Ajanta. The influence of Ajanta art is especially strong in the early paintings, from the sinuous lines to the choice of subjects, decoration and the complex compositions of varying dimensions and depths.

There are three types of caves. The first type, seen in caves 268, 285 and 487, are meditation rooms for monks, flanking a main hall. Another type of cave—254, 257 and 251—enshrines the stupa in a rectangular room with a gabled ceiling, imitating Chinese wooden architecture. There is space for circumambulating the stupa during prayer. The last type, found in caves 272, 249 and 296, is fitted with an altar and images of the Buddha and Boddhisattvas, where devotees can place their offerings.

The earliest paintings in Mogao belong to the Northern Liang period of the Sixteen Kingdoms, with distinctly Indian features: brown-skinned and large-eyed Buddhas, Boddhisattvas and monks, with long ears, long and curly hair, sharp noses, dhoti (kashta) and angavastra (upper cloth) or bare upper torsos, and garlands, all in the style of the ‘Western regions’ (an ambiguous term for India, since Indians entered China from the west). Women are dressed in the style of Kuca. Simple, uninhibited colours stand out against an ochre-red background. The three-dimensional technique, known as the ‘traditional method of heavenly India’ (tianzhu yifa), was used to create a light-and-shade effect on the faces. Vermillion (now turned black) outlined the contours of the face and the eye sockets, while the eyes and the bridge of the nose were painted white. The figures were outlined in ochre, then coloured and again outlined in black. A 3.4-metre high Maitreya in Cave 275, renovated during the Song dynasty, retains those wide eyes, sits cross-legged between two lionesses, one hand in varada hasta (the other is broken), and wears a crown on his head. Solemn and tranquil, there is much of Gandhara in this image.

Professor Duan Wenjie describes the development of the human figure in Dunhuang as the greatest Indian contribution to Chinese painting, adding that “Dunhuang inherited the conventional Indian pattern of Buddhist art in which everything centres around the focal theme, the Buddha image.”

The influence of Ajanta art is especially strong in the early paintings at Mogao, from the sinuous lines to the choice of subjects, decoration and the complex compositions of varying dimensions and depths

Northern Liang was followed by Northern Wei, whose murals are richer in content: Buddha’s life and Jataka tales were enriched with illustrations of the working of karma. The images became taller and the head-to-body proportions more disparate. Indigenous elements crept in: slender figures, long limbs, long and lean faces, Chinese-style garments, paintings arranged horizontally and enriched colouring. The line drawings display greater ‘maturity in skill and smoothness, like enchanting clouds and flowing water’. Except the Buddha in this and previous births, the other figures are all fully covered by shawls. Chinese mythology enters Buddhist stories. Chinese ‘heartland’ colouring techniques—two red cheeks to symbolise health and vitality—also create a three-dimensional effect different from that of the early Indian style murals.

The following Northern Zhou period was brief but profuse in the number of cave paintings. The style may be traced back to the Kuca cave murals, a result of the close ties between China and Turkistan after the marriage of Emperor Wu with Turkish princess Ashina. By the end of the following Sui period, the variety of life on the Silk Road made its appearance in the paintings: square foreheads and broad cheeks vie with elongated, curved and well-developed figures. Buddhas and Boddhisattvas wear high knots and bejewelled headdresses. Tall, graceful and sinuous bodies. Sui was followed by the Early, High, Middle and Late Tang periods, with moustachioed but effeminate male figures whose features, postures and costumes portray differences in their ages, experience, character with more realism, a Central Asian characteristic. Paintings of the Tang Era depict the complex heavens of the various Buddhas down to minute details.

Of all forms of the Buddha, Maitreya, whose cult developed around the third century, was the most popular in Mogao, where he is regarded as the guarantor of future prosperity and happiness. Maitreya is to appear on earth, achieve complete enlightenment, and teach the pure dharma. He resides in the Tushita heaven, to be reached through meditation. Maitreya was the most popular figure in Gandhara art, apart from Buddha, and probably reached Dunhuang on that route. Chinese dynasties between 515 and 1899 CE carried out their revolutions in his name, or in the name of the Lotus Sutra attributed to Maitreya, or heralded their rule in his name.

The other favourite figure in the Mogao paintings is the ubiquitous apsara. The apsaras and gandharvas are executed in a combination of Indian and Chinese styles, with fine lines, playing musical instruments, dancing or floating in the skies. In fact, an apsara holding a sarod is the emblem of modern Dunhuang, and a 20-feet high stone carving stands at the city centre.

HEAVENS ARE aplenty, filled with all the Hindu devas: Ganesha, Indra and so on. There are hordes of demons too, led by Mara. Like the Western Indian Buddhist cave temples, many caves here have paintings of male and female donors identified by name.

Visitors are restricted to a few caves. I visited the Northern Wei (fifth century) cave 251, painted with heavenly apsaras, and 259, with paintings of Buddha and Prabhuratna, author of the Lotus Sutra, positioned like Nara-Narayana; cave 249 (Western Wei, sixth century) with devas and asuras and Indra with his Chinese mistress Dongwanggong; Early Tang (seventh century) cave 97 which houses the largest Buddha of Dunhuang; caves 335, 336 and 337, the last decorated with the Ajatashatru and Bhashyaguru Sutras; cave 148 (High Tang, eighth century) with statues of devarajas, warriors and followers, 1,000 miniature Buddhas on the ceiling and the Mahaparinirvana on the western altar, Avaokiteshvara on the south and Surya and Chandra on the north wall; cave 130 of the same period, with a 26 metre-high seated Maitreya, a floral ceiling and bodhisattvas on the walls; the late Tang (ninth century) cave 16, with its chessboard-and-floral patterned ceiling, a platform holding nine Buddha statues and painted with 1,000 Buddhas; and cave 17 where the manuscripts were found.

Dunhuang was declared a UNESCO World Heritage Site in 1987 because of its artistic treasures of statues and wall paintings, the cultural exchange they represented and Buddhist monastic history. To preserve this treasure, there is talk of a Chinese proposal to close the caves permanently to visitors in a couple of years. My guide is a well-educated conservationist and the tour gives me a good idea of the styles, but after I leave the caves and buy a book, I realise that there is so much more I have not seen. The wealth behind these walls must be overwhelming. This is undoubtedly China’s greatest heritage site.

I leave Mogao with a sense of loss, that the dunes of the desert probably hide more than they reveal. And that Buddhism, which once united the Indian and Chinese cultures, has become a monument amidst the desert sand.