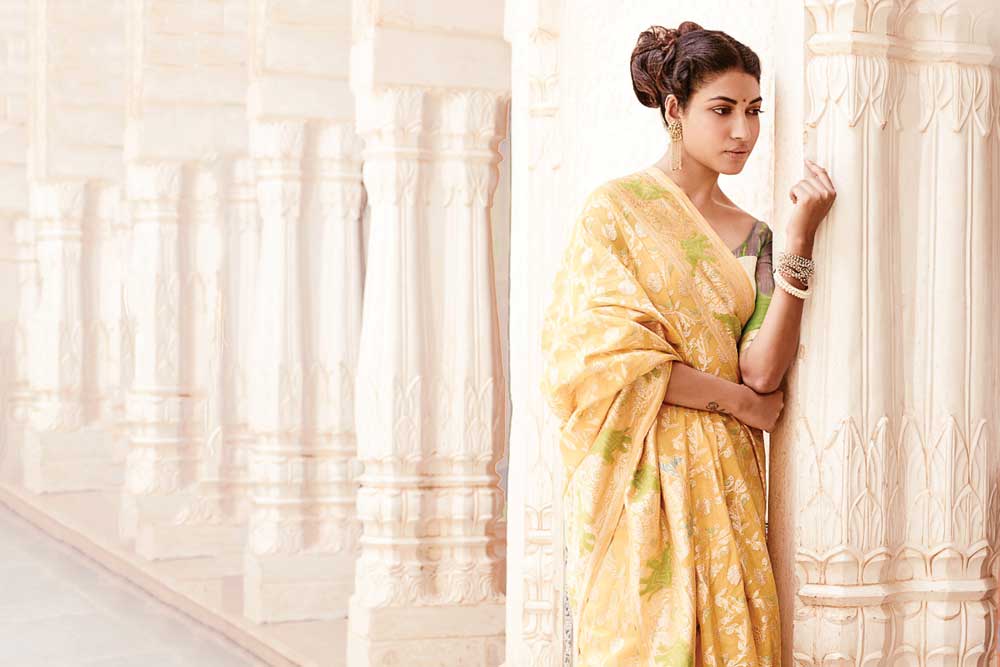 AISHWARYA RAI BACHCHAN needed something to wear. It was January 2016, and the Bollywood star was due to meet François Hollande, then president of France, for a Republic Day lunch while he was on a three-day trip to India. A regular at Cannes International Film Festival and a brand ambassador for French beauty giant L’Oréal, Bachchan was very sure she wanted a red Banarasi sari, something that would represent the gravitas and beauty of Indian heritage. She also wanted pure zari on it—the gold-plated silver weave that is considered the Holy Grail for saris in India. “It has to be exemplary,” her stylist was instructed. The experts were called in.

That’s how sari designers and textile exponents Swati Agarwal and Sunaina Jalan suddenly found themselves in the limelight. Having worked quietly on developing rich handloom silks and muslins since 2007, the Kolkata-based sisters-in-law catapulted to fame once the photos of Bachchan’s red drape went viral in the media. Now two shows old at Lakme Fashion Week, the revivalists of heirloom traditions are all set to present ‘Gold: The Art of Zari’, a special exhibition curated by Mayank Mansingh Kaul in Delhi later this month.

Married into the same family in the mid-1990s, the homemakers went on an unsuccessful quest to find the quintessential Banarasi sari to wear to a wedding around 2003. “We quickly realised two things,” says Agarwal, 46, who studied history at Lady Shri Ram College in Delhi. The first was that, though Banarasi saris are considered a must-have in an Indian bride’s trousseau, the industry itself was floundering due to distrust among customers about the authenticity of the wares on sale. “Genuine zari thread wasn’t being used, and consumers weren’t getting what they paid for,” says the mother of two. The second thing the duo noticed was that all the weavers were middle-aged, a cause for alarm. “If the younger generation doesn’t pick up the ancient skills, the art will soon die out in a few years,” thought Jalan, an alumna of Loreto College in Kolkata, also a mother of two.

With Agarwal’s research and development skills and Jalan’s artistic way with colours and designs, the duo set about addressing both concerns. They organised the industry by offering stable, well-paid remuneration to weavers and now successfully run the last-surviving artisanal zari workshop in the world in Varanasi. “The idea was to make [zari work] lucrative for the younger generation to take up as a full-time career,” says Jalan, 45. They also put the buyers’ concerns about authenticity to rest by offering complete certification for every product, from the weight of the garment and the name of the weaver to the percentage of purity and the time taken for completion. “By creating trust, we created demand,” Agarwal adds. They also added their own unique touch to the process by studying vintage brocades, developing contemporary designs, and reviving heritage weaves. Initially starting with fine muslins and silks, their label, Swati & Sunaina, launched officially in 2015 and is now known for handmade silks and zari brocades.

“Some weaves such as the rangkaat are unique and nearly extinct. No one else is developing them at present” – Swati Agarwal, designer

Weaving an authentic Banarasi sari using real zari is a painstaking process that can take anywhere from one to nine months to complete. Naturally, the quantity is limited—the designers create about 80 to 100 single-edition pieces per year for their top-end ‘Gold’ line, which are made with 98.5 per cent pure zari and are priced from Rs 2 lakh to Rs 4.5 lakh each. In addition, they make about 200 muslin and silk collectibles that are increasingly sought after by young educated women who seek heritage stories and wish to invest in heirlooms that can stand the test of time, including celebrities such as actor Kangana Ranaut and film director Ashwiny Iyer Tiwari. “Some weaves such as the rangkaat are unique and nearly extinct—no one else is developing them at present,” says Agarwal, adding that there are merely two or three weavers in Varanasi who even know the technique involved. Other complex weaves, such as the kheem khwab, which literally means ‘woven like a dream’, and the jamdani take months of specialised labour by master craftsmen to produce. Their meticulous beauty indeed feels like ‘a dream’ to one’s fingers and gaze.

IN THE PAST decade, the designers have not only revived vintage weaves “simply for the beauty of it”—such as the Prabha sari, which is a reproduction of an early 20th century design— they have also innovated with techniques to create renewed interest in the art. One of their creations is inspired from antique jewellery, so that the jhumka (a dangling earring) is converted into a boota (traditional motif) and a necklace into a sari border. The final effect is three-dimensional, as the zari is woven to stand out above the fabric. In other cases, they experiment with the colours of the zari. “Silver zari is electroplated with gold using very old techniques before the yarn is used in weaving,” explains Agarwal. While the most common way to make zari is to combine one metal (silver usually) and one cotton strand, the duo are now developing the use of two silver strands. At present they employ about 40 to 50 weavers in Varanasi, who work on as many dedicated pit looms. It is a labour-intensive process.

“The idea was to make zari work lucrative for the younger generation to take up as a full-time career” – Sunaina Jalan, designer

Besides the production, the designers have also invested time and effort in building the right ambience for their flagship store at Keyatala Road, Kolkata. Notes of jasmine and light strains of music greet visitors, and antique cupboards made of seasoned Burma teak display saris sorted by colour. The more delicate saris, almost like the thin, gauze-like tissue fabric, are wrapped in muslins before being placed on velvet-lined shelves. The display tables feature old silver legs of khaats used in the Shekhavati region of Rajasthan, and an old jacquard machine used to weave saris has been brought in from Varanasi. Along the corner of one wall stands an old veena. The old-world charm of the store has beckoned customers from as far as Nairobi, including a young lawyer who did not want to be ‘just another bride’. “We appeal to a new segment of evolved, modern young women,” says Agarwal, who is very interested in current affairs and books; she reads verses from the Gita every morning and spends an hour every evening on Twitter keeping up with world events. In contrast, the creatively inclined Jalan enjoys travelling and painting in her free time.

Though Agarwal and Jalan were being patronised by a high-networth clientele from around the world, the designers wanted to create awareness about the process of zari-making among buyers, and to encourage the next generation of weavers to see it as a viable profession—as relevant to modern lifestyles as smartphones. That’s where Mayank Mansingh Kaul came in. A graduate from the National Institute of Design in Ahmedabad and a former textile designer and curator, Kaul caught the attention of the sari designers after the success of his six-month exhibition ‘Fracture: Indian Textiles, New Conversations’ in 2015, commissioned by the Devi Art Foundation, which took five years in the making. “In the past few years I have been focusing on Indian textiles in a way that links the contemporary to the historical,” says Kaul, listing a range of weaves that have stood the test of time, from ikat, ajrak and khadi to jamdani and brocade. He rues the fact that despite our rich historical design legacy, there is no design museum or private gallery in India to archive the old art forms. One of the youngest ever consultants to work on policy for the Planning Commission in the field of craft and design, Kaul realised that “while government bodies are well-intentioned, the best work has happened through private enterprise”.

He began to study the history of textiles and travelled to various parts of the country, including Kanchipuram in Tamil Nadu, to explore the “sacred symbolism” of adding metal such as silver and gold to textiles. “The oldest reference for fabric made with gold is found in the Rigveda from more than 3,000 years ago. Today, we enjoy the beauty of zari but we are not able to go beyond a superficial or commercial understanding of it,” says the Delhi- based textile maven. While putting together Swati & Sunaina’s show, he has not only selected some of their most exquisite pieces, but has also sourced vintage heirlooms from collectors around the country. The exhibition will also feature a section that takes visitors through the zari-making process and introduces them to the craftsmen behind the scenes.

“Zari-making is an improvisational, artisanal process,” says Kaul, who was impressed with the way Agarwal and Jalan changed the shade of zari depending on the colour of the fabric, adding that almost 20 shades each of gold and silver are possible by manipulating the plating process. He also appreciates the strict quality control in their Varanasi looms. “Their work is reminiscent of old craftsmanship not seen for 40-50 years. They’re taking forward a skill seen in vintage work,” he affirms. The exhibition will show the various ways that they use zari, such as in their Advitya sari where the aesthetic is restrained so that the zari appears to be a part of the fabric, which is woven using the intricate ‘dampach’ technique. “The kind of sophistication you see in historical textiles is still intact in their work,” he marvels. “Their pieces are museum-quality.”

Indeed, a scroll through the list of their saris is a lesson in the genius of Indian craftsmanship. A continuous pattern called jangla runs through a katan-mulberry silk sari called Kaaynaat, for instance, and four different patterns are repeated in the middle. ‘This sari is technically complex as it is woven on a large 320-hook jacquard loom to engineer the changing patterns and uses the ‘kadhuwa’ technique of weaving,’ informs the card that is packed in the wooden box along with the sari for its buyer. All saris are made with natural fibres dyed in eco-friendly ways, and each one comes with a spindle of the zari yarn that was used in weaving, besides a certificate of authenticity.

The exhibition—which will run from September 23rd to 27th at Bikaner House in Delhi—is non-commercial and, as Kaul hastens to add, “not an over-projection of the brand”. Describing his last exhibition on Baluchari textiles and garments in Kolkata that featured 60 extraordinary pieces from the 19th century till today, Kaul finds the fine balance between history and contemporary art challenging and exciting. “My work is to reaffirm the connection between the past and present.” Nothing like gold to set the tone.