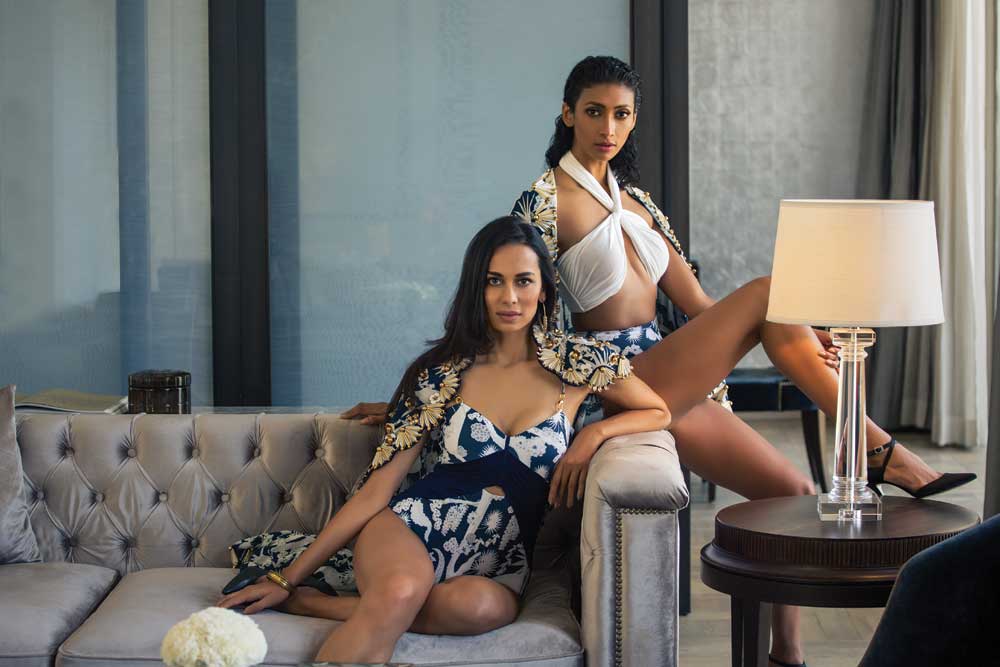 A TOTE BAG ADORNED with golden swans, sapphire waves and bright orange floral patterns with the line ‘I do (S)Crew’ greeted each of the eight guests who arrived for Outhouse co-founder Kaabia Grewal’s six-day bachelorette party in Mykonos, Greece. Designed by Shivan & Narresh, the bag contained customised swimwear by the brand. Each day, every person received a new collection—from the Seychelles- inspired La Digue series to the Eden series (a homage to the colour palette and art of the Japanese Edo period). But these weren’t swimsuits meant just for the water. The party wore bikini tops and shorts to brunch, maillots at pool soirées and trikinis with a wrap for sightseeing. These were swimsuits meant to be statements of culture, travel and even functionality.

“As more and more Indians document their life through social media, they inspire others to do the same. The impact of this broadcasting has been such that even our quintessential ‘Big Fat Indian Wedding’ has been transformed into the new age ‘Destination Wedding’. And so you now see people wearing a bikini sari at a mehendi or a light-weight halter lehenga to a beach wedding,” says Narresh Kukreja, co-founder and creative director of Shivan & Narresh. Having launched the brand together with his partner Shivan Bhatiya in 2010 in India, Kukreja says that swimwear has seen a transition from being an item of luxury to a fashion statement in the last few years. Increased disposable income and global exposure has not only made swimsuits acceptable to the Indian buyer, but also brought in a set of expectations on design and purpose. “Swimwear stands very high on aspirational value for Indians where an increasing number of women who are extremely comfortable in their own skin want to make a statement with their fashion and holiday choices. These women are well aware of their purchase, which is based on their need to acquire multi-functional pieces and not solely for its decorative value,” says Kukreja.

“Great fashion houses are born when they create something that solves a design problem for a generation. That’s what we attempted to do with our bikini sari” – Shivan Bhatiya

To give buyers this added worth, Shivan and Narresh made sure their label focused almost exclusively on swimwear. Priced between Rs 15,000 and Rs 21,000 for a swimsuit, the duo diversified their categories to include exciting options such as bikinis and trikinis, maillots and cover-ups. They also gave the fashion world its first bikini sari—a trail of georgette that can be draped in 10 different ways around a bikini. The design has been worn by several celebrities from Bipasha Basu at the 2012 IIFA to Kim Kardashian on her first Vogue India cover.

“Great fashion houses in the world are born when they create something that solves a prevalent design problem for society, and take a leap for the entire generation of that time—from the trench coat invented by Burberry to the little black dress by Chanel,” says Shivan Bhatiya, co-founder and head designer at Shivan & Narresh. “In 2011, we were posed with a similar generational problem: ‘What does an average Indian woman wear around water?’ A bathing suit while seeming appropriate did not have the right cultural context. Cotton or silk saris would crease and could not perform the required functional task. The same went for denims or a salwar kameez. And so we came up with the bikini sari,” says Bhatiya of the idea.

The designers made their Hollywood debut in 2012 with Ang Lee’s Life of Pi, for which they designed vintage swimsuits for 81 different people in a sequence that recreates the famous Parisian ‘Piscine Molitor’ lifestyle of the 1950s. They credit much of their success to travel and local culture. “We are constantly looking forward to drawing inspiration from the places we travel to. From our recent trip to Turkey, we are drawing elements for our upcoming series which will be shown at the Fashion Week in October. We treat our prints like bodies of art,” says Bhatiya. However, once they decide on a print, the process of designing a new collection has only just begun. “The next step is to identify key colours of the season. These usually stem from the pictures taken during our travels: a specific shade of yellow seen on a flower or a new kind of a lively orange-red that is present on a local fruit available only in that region. We then work on developing new silhouettes for the series. As social media makes the world more flat and fashion more democratic, the silhouettes today have to speak the same global language that a millennial sitting in Japan or Europe would relate to as well,” adds Bhatiya.

For Kukreja, one of the most challenging collections was their recent EdoMer series which included elements of Japanese Edo art and the natural world of Seychelles. “The Seychelles archipelago immersed us in the beauty of the African tropics. Its talcum-powder beaches, lapped by azure waters and lush foliage, along with its luscious fruits and flowers, were a major influence for the series,” he says.

The duo have now expanded to home and celebration design work. At a wedding for a Delhi couple earlier this year, theycurated four of the events. “The one with the most impactful aesthetics was the cocktail party which used our signature skein work in spatial fashion. We hung up more than one million skein gold petals from the ceiling,” says Kukreja. Working for such events has been more than just another work project. They say it has helped them gain a deeper understanding of individuals and family. “We drew insights from these close interactions. It has helped inspire the design aesthetic for our upcoming collections,” says Kukreja. 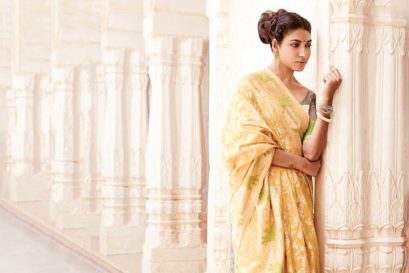