The rise of a new tribe of Indian wizards 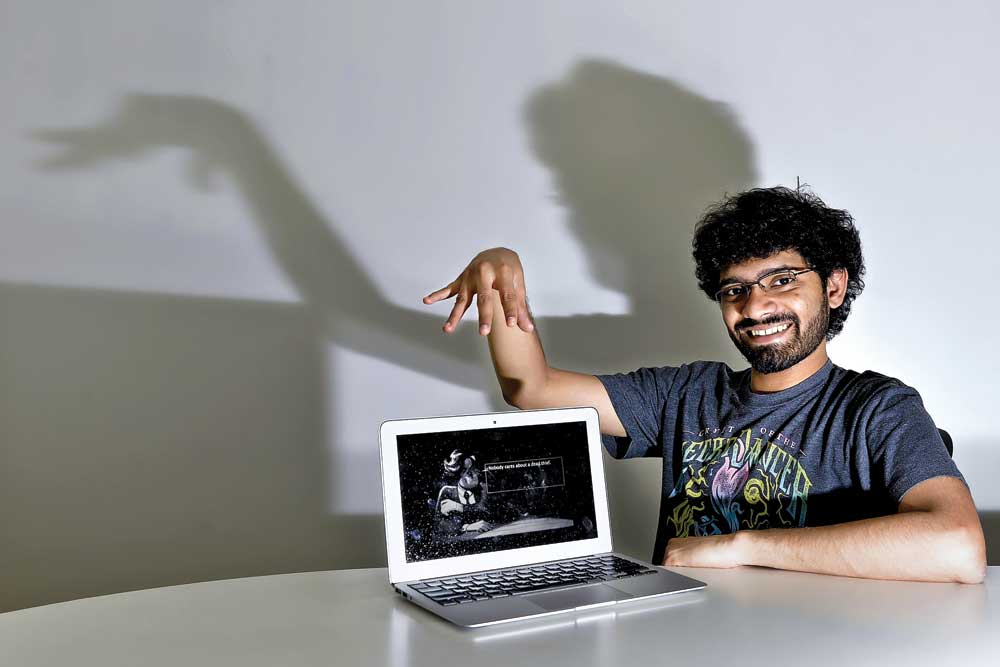 CAN ONE REALLY love people without also loving the places they inhabit? ‘Wherever she was,’ Scott Fitzgerald once wrote in a short story, ‘became a beautiful and enchanted place… but he did not think of it that way. He thought the fascination was inherent in the locality, and long afterward a commonplace street or the mere name of a city would exude a peculiar glow, a sustained sound, that struck his soul alert with delight… [and] sent him seeking for her through haunted rooms and gardens that he had never really seen before.’ This piece of literature, which describes life, also precisely evokes the experience of good video games, as anyone who has wandered through their lovingly realised worlds in quest of mysteries will testify.

Of course, it is not good but bad video games, in which places (and mental states) are not loved, but cheapened, and the destruction revelled in, that have come to dominate the perception of games in general. This is unfortunate, because such games merely correspond to mindless books and titillating movies, of which there is absolutely no shortage. Yet critics revere literature and cinema (to the point of making excuses for them), but are embarrassed talking about video games, which perhaps suggests they are more concerned with whether their opinions will pass muster in public, than with the first principles of art and story-telling, and with their duty to the public. There exists what Simon Parkin, writing in The Guardian, recently called ‘the unique shame of the video-game critic’. It is a cowardly shame, which only expedites the global proliferation of dehumanising addictions to drug-like games. So while mature games, which honour places and situations by immersing the player in them, are still made and played in various parts of the world, their critical appraisal has been ghettoised everywhere. This is specially damaging to those societies whose creative confidence was low already, and needed much support—post-colonial societies for example, like India. It makes us vulnerable to the worst in gaming and utterly uncertain of the best.

So it is with an emotion not unlike chancing upon young saplings growing amidst slabs of concrete that one finds Indian game developers making original games which treat both their environment and their own selves with respect. They do not constitute a trend, but rather a set of glittering exceptions that are valuable to unearth for everyone’s sake. Not many of us, for example, have heard of Unrest. It is a role-playing game (RPG) made by Pyrodactyl Games, a Jaipur- based studio set up by a Manipal Institute of Technology graduate and software programmer Arvind Raja Yadav. Now, India’s software programmer to game developer ratio must be one of the lowest in the world, so crushing is the general anxiety about job security. “As for my case,” says Yadav, “I guess I just really wanted to make games and didn’t particularly care about getting a job once I graduated.” But only those who resist social and economic pressures appreciate their full strength, and this shows in his game. Unrest is set in a fictionalised ancient India, and consists of five separate stories about ordinary people in complex social situations. In one of them, I played as Tanya, a 15-year- old girl who has just learned that her parents have arranged her marriage to the village idler, a boy she dislikes, who is, however, of a higher-caste. Whether to comply, after all, with the dictates of her parents (whom she loves), or in some way to sabotage the marriage, perhaps by ferreting out skeletons from the other family’s closet, or whether to dream up a great escape to the city, maybe in company with her girlfriend, Juhi—these and other options present themselves to the player. Everything is simply laid out, the graphics are not spectacular, but, to borrow a quote from the game designer Jonathan Blow, which applies to all good games, ‘the magic… takes place inside the player’s head’. For although we may be familiar with the problems of arranged marriages, we do not necessarily respect them; indeed, we often despise them (as we do other ‘Indian’ problems) even as we live through them. In game-play, however, a situation is imaginatively embraced, the player is required to dwell in it, and to ponder it, and a patient understanding is produced.

There are a lot of stories and aspects of the culture we’ve known all our lives; it’s been great exploring and working that into the game

Such is the power of the medium. No wonder it has drawn others, from non- technological backgrounds, to develop their own games, stamped with their own personalities. Gayatri Kodikal is a filmmaker from the National Institute of Design (NID). In 2015, she received a grant from the India Foundation for the Arts (IFA), to work on a game. She chose the medium, she says, because it was best-suited to telling one particular story—“obscure, extensive, historical, multi layered.” The story pertains to the Georgian Queen Ketevan, who was killed in Shiraz in 1624, after refusing to convert from Christianity to Islam. Her remains were secretly smuggled out to Georgia, and also, apparently, to Goa. Later, a Georgian filmmaker came to Goa, searching for the rumoured relics. Then the Archaeological Survey of India began a 20-year-long dig, finally discovering fragments of a hand. It is a story that runs off in many directions—a researcher’s dream or nightmare—and Kodikal’s game, The Travelling Hand, seems to me evocative of the process of research itself. Players must coordinate two ‘selves’, the dreaming self, and the waking self, to explore an abstract terrain and follow the various trails. What is significant about this game is not its popular accessibility, but the attitude to research that it opens up, one of playfulness—surely the ‘secret ingredient’ lacking in Indian academia.

Also from the NID, and a grant- recipient from the IFA, is Dhruv Jani, whose work-in-progress, Somewhere, has been described as one of ‘the best- looking games in all of video-dom’ by the gaming website Rock Paper Shotgun. Its good looks, however, are a matter of purposive design, not graphics technology. Jani, who lives near Daman in what was once a Portuguese-occupied town, and which, following the dislocations of freedom and development has quite lost its narrative identity (in his words), is consciously trying to minister to neglected spaces, and seems absolutely aware that games, more than any other medium, can do this. Somewhere, excerpts of which are downloadable, is beautiful because it is presented with nostalgia, through a surreal and child- like vision. Table-fans, Colgate tubes and large medicine jars litter a landscape that is awkward and fractured, but always patterned, colourful, and redolent with stories. It’s not India as we see it squarely, and one might object that it is an India mythologised—or one might surrender to the loving gaze, and be benefited.

Some of you may believe one truth and some others may believe other truths. I found that this was a very intriguing experience to capture in a game

Indeed, it appears that many of these developers are consciously trying to relate to the spaces, emotions, and influences of their childhood—much like novelists do in their first novels. Avinash Kumar, a NIFT graduate, musician and ex- toy designer, has been working on Antariksh Sanchar for the last four years, under the label of his studio Quicksand. The game is set in 1920s India, in a temple town inspired by Madurai, complete with swaying palms, gorgeous gopurams and the music of mridangams. Players take charge of two characters—Srinivasa Ramanujan, the great mathematician and dreamer, whom we encounter on the cusp of his Cambridge days, and his mother, who is depicted by Kumar’s own mother, the Bharatnatyam classical dancer, Jayalakshmi Eshwar. Much like Jani, Kumar speaks of consciously presenting, through the immersion of an adventure game, a culture that is dear to him, with its wondrous interface of the rational and irrational, myth and technology. Even in its unfinished state, the game has garnered much interest at festivals abroad, which does not surprise him. “The more locally rooted”, he suggests, “the more appealing everywhere.”

Meanwhile, in Bengaluru, another infant game studio is exploring its roots. Mithun Balraj and Abiram Shanmugam are busy making Death of a Detective, a sleuth adventure set in a small town somewhere in South India. Both of them, says Balraj, grew up in such places, and “there are a lot of stories, traditions and aspects of the culture we’ve known all our lives that it’s been great exploring and working that into the game… Why write a detective story set in New York if you’ve never even been there?” Of course, this is fiction, not autobiography, so the game is set in the 1950s, which makes room for their imaginative influences. “It’s been heavily influenced by Tamil cinema and film noir of the 40s and 50s.”

You can make games all your life with the material there in India. The more locally rooted, the more appealing everywhere

Balraj and Shanmugam got to know each other during a meet-up of game developers in Bengaluru. Other developers have managed to find collaborators on web forums. There is an easy globalism to the world of game development. Not only may collaborators be based anywhere, but games may be sold world-wide at once, over online platforms like Steam. This is a blessing, because it makes good games accessible to everyone, including developers who thereby receive inspiration. But it’s a mixed blessing, because the self- contained market subtly reinforces the idea that games, those who play them, and those who talk about them, form a sub-culture unto themselves. And sub-cultures, however massive, are by definition removed from every cultural mainstream, which they neither nourish nor are nourished by. So while it is natural that many of these young Indian developers have their eyes on the world, and may look at Indian sales or publicity simply as a bonus, their future depends on their relationship with their own, local spaces—which, as we can see, are the well-spring of their creativity. For the time being, they have enthusiasm on their side. But whether they grow from strength to strength—by relating with greater confidence to contemporary Indian milieus, for example—or whether they slide into aridity, depends on their keeping up a conversation with their immediate surroundings.

It is not an easy thing to do, especially with game criticism still so ghettoised. It may seem thankless. But it will be the test of their love.