The Death of Rotten India

From black mark to gold standard 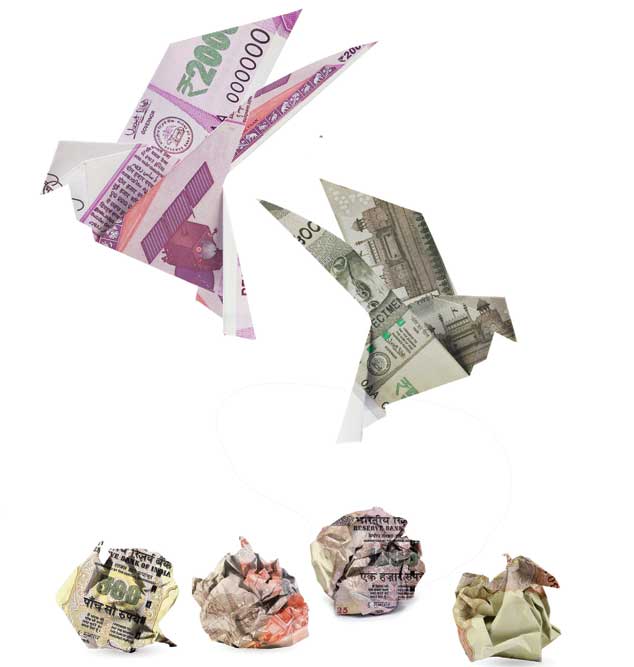 THE VISION OF politicians, it is said, doesn’t usually extend beyond the next election, which could be five years, or in India’s round-the-clock electoral cycle, five months. The logic of policymaking, including the economic variety, should therefore dictate a bias towards the short run, never mind the costs that short termism may impose in the long term. At the beginning of 2016, India, the perennial runner-up to China in the emerging economic powerhouse sweepstakes, stepped up to the podium to become the fastest growing major economy in the world. India would hold on to its position as China stuttered. The Government of Prime Minister Narendra Modi seemed to have at last found an antidote to the poisoned inheritance from UPA-II. The good news on growth was complemented by the slowdown in inflation. In the short run, the economic situation, always a crucial determinant of the well-being of an incumbent political formation, looked bright and on a positive trajectory. And then, on the evening of November 8th, Prime Minister Modi did something politicians are not supposed to: he took a decision which would bring great short-term pain to every Indian, bring certain businesses to a standstill, and potentially slow growth down for two quarters.

The real gains from demonetisation were never going to be immediate, but would accrue over time in the form of a cleaner and less corrupt system and a more rule-abiding citizenry, inducing the kind of institutional and mindset change which, in the long run, would help India grow in double digits. The year 2016 could have gone down in history as the one in which India finally grew faster than China, the one in which India finally acquired a world-class institutional framework for fighting inflation, the one in which it made its most decisive step to becoming a single market (by clearing legislation on GST). Instead, it will now be remembered for the Prime Minister’s decision to remove from circulation 86 per cent of India’s currency (to be replaced, of course, but with delay and at inconvenience) in an audacious bid to change the way India— its government, entrepreneurs and citizens—does business.

The one cycle which is shorter than the continuous electoral cycle is the 24×7-hour news cycle. As if by definition, its view of the world must be confined to the next 24 hours, at most seven days. Unsurprisingly, by most media accounts, demonetisation is a disaster because of the daily inconvenience it is causing ordinary people. That impression only gets magnified as the story repeats every day. The point is that at least 50 days of pain was admitted by the Prime Minister himself. To the extent that media scrutiny ensures better implementation and accountability on the part of the Government, it is most welcome. But to view—and damn—demonetisation in the isolated context of the weeks that follow the decision is acutely myopic.

If there is one thing that has been exposed in the aftermath of November 8th, it is how brazenly the rule of law is violated in India. The fact that money is being laundered on a large scale is not a failure of demonetisation but that of the system pre-demonetisation. Too many people—the corrupt, the wealthy and the crooked—had found too many avenues to either cover up money made through illicit means or evade taxes. The laundering post November 8th only shows how rotten the system had become.

There are serious consequences of a decrepit system which a high rate of growth and moderate inflation can gloss over in the short run, but which in the longer term would drag the economy down, particularly its poorest citizens. Much has been said about how demonetisation has hurt the poor disproportionately. That may be true for a matter of weeks. But in the longer run, over years, it is evasion of taxes and corruption in public services that hurt the poor more, and more grievously. It is the poor, more than the rich, who need government investment in public services and efficient delivery of those services, whether it’s health, education or sanitation (the rich can obtain these privately). Large-scale tax evasion limits the amount the Government can invest in the most vulnerable. And there is plenty of evidence to suggest that too few people pay income tax in India. Consider the fact that only 29 million Indians filed tax returns in 2011-12 and just 2,700 Indians declared annual incomes of more than Rs 5 crore. India’s tax to GDP ratio, which is 17.5 per cent of GDP, is not only much lower than the OECD average of 35 per cent, but also lower than in other emerging economies like Brazil (34 per cent), South Africa (27 per cent) and China (22 per cent). Worst of all, India’s ratio of direct taxes (paid only by the well-off) to indirect taxes (paid equally by all) is 35: 65, whereas the OECD average is the exact opposite. The regressive tax structure has burdened the poor unfairly. Now, after demonetisation, it is reasonable to expect many more individuals (whether through voluntary disclosure or penal investigations) to become a permanent part of the tax net.

The gains from an economy with less corruption and more taxpayers, investment in public services and respect for the rule of law will be far greater and for much longer

Corruption in public services is equally damaging to the poor because it makes essential services either unaffordable or unavailable. For the long term health of India, all its citizens, not just a privileged minority, must have an opportunity to rise. The Government needs to invest in them to provide them an equal chance to succeed. If there is one sphere in which India hasn’t achieved the desired success even 25 years after 1991, it is in delivering quality education, healthcare, skills and sanitation to all its citizens. Insufficient investment and poor, leaky delivery have been twin constraints. India cannot aspire to become a developed economy without alleviating the lot of its deprived.

Of course, critics would argue that demonetisation alone is insufficient to eliminate tax evasion, corruption and black money. Once again, the critics are right. But the critics have a narrow prism. There is a broader context to the fight against tax evasion, corruption and black money. Demonetisation is just one of the many steps in cleaning up the system. Some measures have already been taken. The giving out of natural resources by the Government to the private sector, for long a black hole of corruption and illicit wealth creation, is now conducted by transparent auctions. Appointments to top positions in the bureaucracy involve careful scrutiny of the integrity of candidates. There is the stated goal of taking India’s ranking to 50 in the World Bank’s Ease of Doing Business rankings. That requires trimming bureaucracy and discretion. The Government has moved to revise its tax information sharing agreements with other countries so that the scope of transferring illicit wealth abroad is greatly reduced. The Goods and Services Tax (GST), which was finally passed by Parliament earlier this year, is a major overhaul of a leaky and inefficient indirect tax system which will plug loopholes—the tax is levied at the point of consumption rather than at the factory gate, making evasion harder; the information technology network that will support GST will also make evasion harder; and lower rates would encourage compliance. Two tax amnesties have tried to cajole people to get rid of their bad habits with minimal extra cost. All of these measures must be weighed at the same time, and on the same side, as demonetisation before any sweeping conclusions are made on the efficacy of a systemic clean-up.

IT IS ALSO wrong to assume that no further measures will follow demonetisation. There is already a clampdown on personnel trying to game the system, particularly bank managers who are laundering money. This will act as a deterrent. The Government will take note of egregious money laundering and bring to book those who continued to pursue illegality even when a tax amnesty was on offer. It is mischievous to call this ‘tax terrorism’. Every reasonable country prosecutes those who evade the law on taxes.

However, penal measures are not the only follow-up. There is already a commitment from the Government to rationalise the direct tax system and overhaul tax administration. On the corporate taxes side, there is a pledge to reduce the top rate to a very reasonable 25 per cent while removing exemptions which cause rent seeking behaviour and tax avoidance (as different from evasion). The use of technology in governance will eat away at discretion and make the tax inspector more accountable for his/her actions. In addition, the Prime Minister has a firm eye on electoral reforms—politics and elections are a hotbed for black money. He has broached the possibility of state funding of elections and has proposed simultaneous polls to the Lok Sabha and all assemblies as reform measures. Obviously, electoral reforms require a consensus among political parties. It would be interesting to see if those parties opposed to demonetisation will be on board for serious electoral reform. Real estate is the other obvious domain which needs a clean-up—a regulatory bill has been passed but more needs to be done, particularly on rationalising stamp duties, which are the prime cause of the use of black money.

As things stand, India will greet 2017 with less buoyancy in the economy than it did in 2016. Fortunately, even if growth dampens because of an expected drop in consumption, prices too will decline. Real growth rates (which depend on both the nominal growth rate and the rate of inflation) may not be as badly affected as some fear. The gains that emerge from an economy with less corruption, a larger number of taxpayers, more investment for public services and a greater respect for the rule of law will be significantly greater in quantum, and over a much longer period of time. If GDP is calculated as a sum of private consumption, government spending, investment and exports (minus imports), a cleansing of the system will boost investment and productive government spending which in turn will more than make up for any temporary loss in consumption— over time it will boost consumption.

For the opposition and other critics of demonetisation, 2016 is the annus horribilis of Modi. For others, 2016 may eventually be remembered as the one in which the Prime Minister, through a bold, disruptive decision that affected every citizen, made an economy rife with ‘Third World’ problems fit for its gigantic aspirations. This year, Modi nudged a rotten India into becoming Swachh Bharat.