Who Will Win the Middle East Cold War? 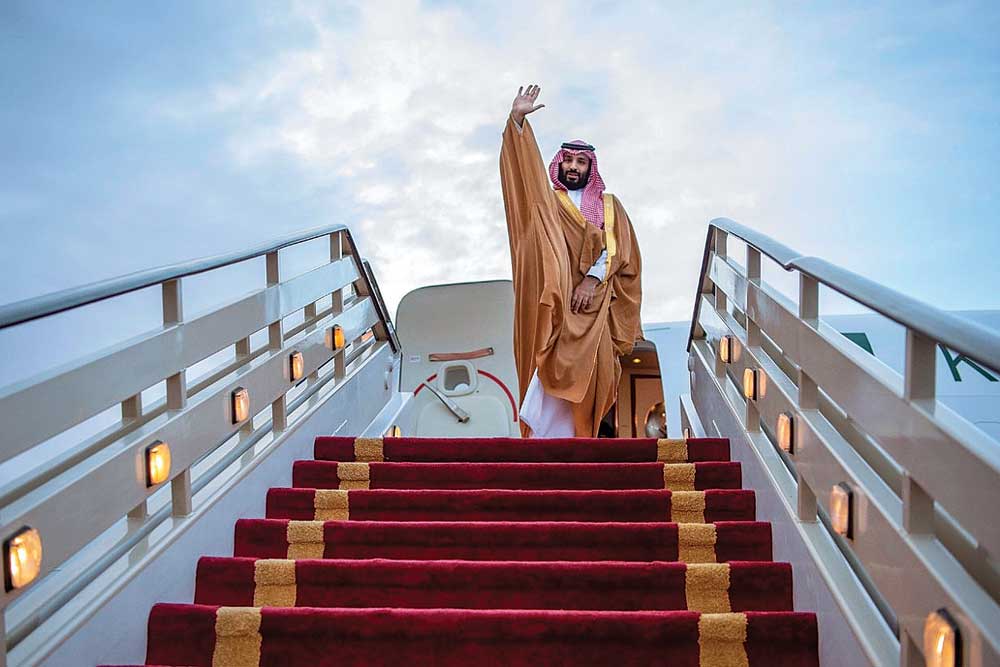 THE UNFOLDING drama of the Arabian peninsula is the current friction between two of the region’s wealthiest royal families, the Al-Sauds of Saudi Arabia and the Al-Thanis of Qatar. It’s a tale of palace intrigue as much as oil-and-gas money, and is under watch across the world for its geopolitical implications. The lead characters are the kingdom’s Crown Prince Mohammed bin Salman (MBS) and Qatar’s Emir Sheikh Tamim bin Hamad al-Thani, with the UAE’s Emir Sheikh Mohammed bin Zayed (MBZ) backing the former.

Doha has recently announced that Qatar would quit the Saudi-dominated Organization of Petroleum Exporting Countries (OPEC). Last June, Egypt and Bahrain joined Saudi Arabia and the UAE to impose a sea, land and air blockade on Qatar. One of the official reasons given was Doha’s alleged support of terrorism, given that the Al-Thanis are said to have backed several Islamist groups in Libya and Syria, offered shelter to Israel’s enemy Hamas and let the Taliban open a local office. But Riyadh’s reasoning was hardly convincing, especially because it is no stranger to funding hardline Islamist groups in many parts of the world.

It’s likely that the real reasons for the blockade are personal. For the early decades of the 20th century, Qatar was an emirate of pearl divers while the Saudis built an empire with petrodollars. Riyadh had control of Doha’s economic and foreign policies, and the Al-Sauds didn’t consider their tiny neighbour a problem. Until they did, that is. In the 1970s, Qatar struck gas, and by the 1990s, Qatar was well on its way to wealth. Endowed with the world’s third largest reserves of natural gas—after Russia and Iran—the emirate now boasts of the globe’s highest income per head. It has just 300,000 citizens, making it just 185th the size of Saudi Arabia. The Al-Thanis provide Qatari nationals with almost every amenity free of charge. What was once just a dusty backyard of a rich kingdom is now the envy of the region, with its royals asserting not just their autonomy but also influence.

In 1996, to regain authority over Doha, Saudi forces had tried to oust the current Emir’s father, Hamad, in a coup. It failed. Since then, internet trolls owing allegiance to Saudi Arabia have been trying to malign the Emir’s mother, Sheikha Mozah bint Nasser Al-Missned, known across the Arab world for her advocacy of social reforms and sense of style.

The Arab Spring intensified the rivalry. Qatar dared to opt for a multilayered foreign policy, forging cordial ties with Iran, with which it shares a vast gas field. Riyadh saw this as break of ranks among the Gulf’s Sunni-dominated states, expected to shun Shia-majority Iran, and a challenge to its regional hegemony. The Al- Sauds also saw the Al-Thanis’ approval of the Muslim Brotherhood’s role in Cairo’s Tahrir Square uprising as a threat, since the Brotherhood’s ideas could inflame popular unrest against the Saudi and Emirati regimes. An Islamist group, the Brotherhood opposes monarchy as a form of government and advocates the rule of elected representatives, although its democratic credentials are seen as self-serving at best. Its candidate Mohammad Morsi assuming Egypt’s presidency after the Arab Spring left Riyadh shaken, and it was no surprise that the Saudis helped Egypt’s General Abdel Fattah el-Sisi overthrow Morsi in a military coup not long afterwards.

That achieved, the Al-Sauds turned their attention to Qatar. The crown prince moved to befriend US President Trump’s Middle East adviser and son-in- law Jared Kushner and reportedly offered to support an Israeli-tilted peace deal with Palestinians in exchange for help with the emasculation of Iran. Chuffed with US support, MBS acted last year against Qatar, but the blockade did not yield the dividends he expected. Like other Saudi moves gone wrong, it was destined to fail.

At a Carrefour supermarket in a mall opposite the Grand Hyatt in Doha, shelves are full of goodies from across the globe: Argentinian beef, German caviar and vegetables from the East. The blockade did not last long, says Santoshi, who came to Doha from Kathmandu and has been working here for five years. It led to some panic, that’s all. “People started buying everything and shelves went empty, but that was just for a few hours, maybe a few days.”

With Qatar’s borders and airspace blocked by Saudi Arabia and the UAE, the emirate had to use sea routes for essential supplies (it imports just about everything it consumes). Its newly built $7.4-billion Hamad port served as an entry point for goods from Turkey, Iran, Pakistan and India. For a measure of self-reliance, a Qatari company, Baladna, began producing tonnes of milk and cheese. In a place by that name 65 km from Doha, 10,000 Holstein cows were housed in climate- controlled barns. Today, the country has a surplus that can be exported.

A young Qatari at the supermarket flails his arms to point me to the stocks and his shopping cart when I ask about the impact of the blockade. “We have everything,” he says, “What’s the problem? None.”

WITH A SOVEREIGN fund exceeding $340 billion in assets and gas being drawn round the clock from Qatari wells, the Al-Thanis have shown that money can buy all that’s needed to meet people’s needs.

The state-owned Qatar Airways suffered losses, but that is nothing to upset the balance sheet of the country. Instead of crippling the economy, the blockade has upped nationalism in Qatar. Saudi and Emirati products have gone off shop shelves. In Santoshi’s words, “Qatari people object to anything from there so we had to remove it.” Nasir Ali, earlier with Qatar’s police, was buying locally produced chicken at the store when I met him. “Earlier, we consumed everything that came from Saudi, not any more,” he says.

Qataris back their Emir and are proud of his refusal to back down under Saudi pressure. Some of the Qatari businessmen I spoke to claim the blockade has had an unintended consequence, that of their profits rising. Ibrahim el-Emadi is one of them. A member of the second most powerful clan in Qatar and a cousin of the country’s finance minister, El-Emadi says his profit margins have leapt by 40 per cent since the blockade. “Before, the Saudis and Emiratis took [sales agencies] from global companies and we were merely distributors. Now, I am the agency,” he says. El-Emadi runs businesses that range from hospital equipment and construction to antiques. With the middlemen from neighbouring ‘enemies’ gone, his company’s performance has astonished even him. “Now we feel like an independent country,” he says, “Not under the thumb of the Saudis.” MBS and MBZ have being working together with the sole goal of undermining their Emir, he says, because they can’t bear Qatar’s wealth, its successful bid for the 2022 FIFA World Cup and its sovereign foreign policy: “They just can’t see us doing well, that’s what this is about.”

In all, the going has been good. “Wallah! Nothing better could have happened to us,” adds El-Emadi, “We just have to fly a little longer now. Earlier, it took us three- and-a-half hours to Beirut, now it takes four-and-a-half, that’s it.”

But there has been a cost. The blockade has left families across the land mass divided. Some Qataris are married into Saudi and Emirati families, while many had cross-border businesses that have borne huge losses. In spite or because of the sudden complications of the blockade, however, Qatar seems determined to buttress its defences as far as possible.

Even if the blockade is lifted—there is no sign of it yet—fences would be difficult to mend. Qatar’s defence ministry has made substantial purchases in the fear of a military offensive by the much larger armed forces of its neighbours. Qatar has budgeted tens of billions of dollars to purchase 36 American F-15s, 12 French Rafale fighters and 24 Eurofighter Typhoon aircraft. The country also plans a new naval base next year and expects to increase its navy personnel from 3,000 to 7,000 by 2025. “You don’t want to put all the burden on your friends and allies’ shoulders. At some stage, you have to stand up for yourself and defend yourself,” as Khalid al-Attiyah, state minister for defence, reportedly put it while talking to reporters touring Qatar’s military facilities.

Qatar is dreaming big, but perhaps everything can’t be bought. On a visit to its Al Udeid air base, the largest US military facility in the Gulf, I met Pakistani guards at the entrance. Qatar relies on men from countries like Pakistan and Sudan to fill its military. At the moment, it has only 27,500 soldiers in all. Saudi Arabia, in comparison, has 688,000 active personnel.

The imbalance weighs upon Doha’s defence authorities. Major General Arthur George Denaro CBE DL, a former British Army officer who led the Queen’s Royal Irish Hussars during the last Gulf War and continues to advise Qatar’s Emir on defence matters, spoke to me at the Grand Hyatt Hotel in Doha. “Manpower”, he says, “is the biggest problem” in securing the country.

In a bid to make up for the numbers, the Emir recently issued a decree to extend public participation in Qatar’s national service programme from three to 12 months. And for the first time, Qatari women volunteers are to be accepted.

It is yet hard to say how Qatar will fare in this exercise to shore itself up militarily, but it helps that global perceptions are tilting in its favour—as a result of the exposure of MBS’ authoritarian ways, the latest example being the brutal killing of a Saudi dissident journalist, Jamal Khashoggi.

As Doha prepares to host the world’s largest sports event, it could do with such a shift in opinion. Maybe, just maybe, the love of football across the Arab world will push MBS and MBZ to amend relations.

In a part of the world where the whims of monarchs—and not debates—tend to determine policies, the world may yet wake up to find that the hatchet has been buried. For now, Qatar under Tamim al-Thani, if not winning, is certainly standing his ground in the cold war of the Arabian desert.