Wayanad: The Hills are Dying

Why nobody cares for Wayanad, Kerala’s enduring environmental tragedy 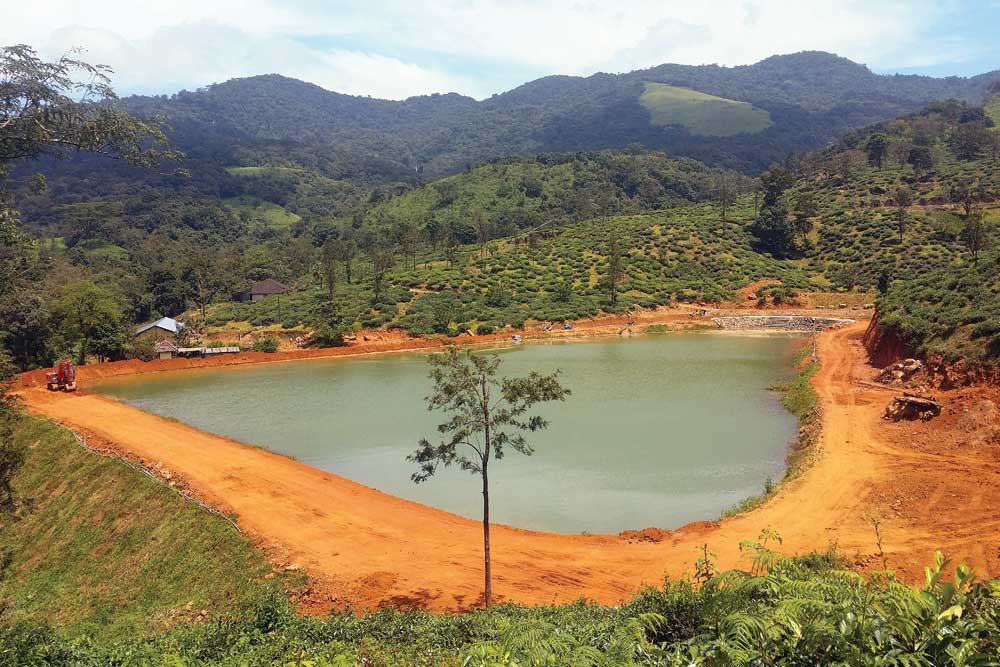 SINCE 2005, RATNAKARAN, a coffee grower in Wayanad, has been using his own rain gauge to religiously record the rainfall. The data he has collected shows a steady decline and unpredictable variation across seasons. He has also been recording the atmospheric temperature daily using a thermometer, and that shows a consistent increase. “Wayanad is dying,” he says, more a forecast than a farmer’s lament. “Today is the tenth of thulam (the Malayalam calendar’s third month), when there should be steady rain coupled with mist and a shivering cold. But it is hot. So far we have not had even a single day of rain.”

Wayanad, a highland region on the north-east border of Kerala, is a biodiversity hotspot. Touching Tamil Nadu as well as Karnataka, it sits where the western and eastern ghats converge, bringing together elements of both systems to give it its unique climate. Its lofty undulating hills, one of the highest points facing the southern end of the Deccan plateau, make Wayanad a tourist favourite too. It is also home to Kerala’s largest tribal settlement, constituting 17.1 per cent of the district’s population. Surrounded by mountains, it is touted as a green paradise, the most salubrious of Kerala’s districts, but now replete with stories of man-animal conflict, untimely rain, rising heat, vanishing mist, disappearing birds, animals and dying rivers.

The reasons for this environmental crisis include the natural forest being replaced with teak plantations, the introduction of monoculture, unauthorised construction fuelled by a tourism boom and the overuse of pesticides, apart from sand quarrying on a massive scale. Ratnakaran’s father was also a farmer and he used to cultivate paddy, a crop not grown anymore. “It was a gradual decline. With rainfall declining and turning unseasonal, paddy became a gamble,” he says, “How can we insist that farmers continue with an occupation that finally makes them commit suicide?”

This is the time of the North-East Monsoon’s arrival, the October-November rainfall that would give paddy crops the water needed at this stage. It would also provide coffee plantations favourable conditions for a good yield, come blossom time in February. Ratnakaran, however, says this will be the most dreadful of all seasons in his memory. “We are 70 per cent behind the expected rain this year,” he says.

Wayanad is classified as one of the four climate change hotspots of Kerala (Palakkad,Alappuzha and Idukki are the other three). The crisis here can be traced to the colonial period. “The history of deforestation begins in 19th century. The British cleared off the forest in some parts of the plateau and began the cultivation of tea and other cash crops. The process of transforming the natural forest into teak plantations also began simultaneously,” says N Badusha, president and founder of Wayanad Prakrithi Samrakshana Samithi (WPSS), perhaps the oldest environmental movement in Kerala.

The British needed lot of teakwood during World War II to build war ships. More than 100,000 acres of land in Wayanad was under the occupation of an establishment called British Royal Fund. The British Raj had distributed around 80,000 acres of it to soldiers who participated in the war. On the rest, they began the cultivation of coffee and tea. Even so, Badusha holds the view that they were not indiscriminate in clearing forests. In the main, they went after degenerated forest and non-forest land. “The indiscriminate felling was started by our own governments,” he says. “Replacing the natural forest with teak plantations started on a massive scale under the first elected government in Kerala in 1957 for commercial operations.”

The practice of monoculture had a huge impact on the biodiversity of the Western Ghats in Wayanad. Of the 110,000 hectares of total forest area, teak plantations occupy 35,000 hectares. These have no undergrowth and this eventually destroys the quality of the soil and threatens the survival of wild animals. Microbial diversity and soil fertility is also seriously compromised by pesticides and chemical fodders used in agriculture. “We have not seen foxes in Wayanad forests for 20 years,” says Ratnakaran. “We have been witnessing not only the vanishing of certain species, but the entry of new varieties of birds and animals seen only in warm weather.”

The British needed teakwood during World War II to build war ships. More than 100,000 acres of land in Wayanad was placed under the British Royal Fund

Teak is not all that has taken over. Hundreds of acres have been planted with mahogany, acacia and eucalyptus. “We had bamboo in abundance in our forests. It was rich in fibre and that was sufficient for elephants. As a result of monoculture plantations, natural bamboo growth was finished off, a major reason for elephants to come out of the forest in search of food,”says Ratnakaran.

The commercial supply of bamboo to a factory of Gwalior Rayon in Mavoor on the banks of Chaliyar River led to its growth vanishing from Wayanad. Gwalior Rayon, established in 1963 for the production of pulp and fibre, was supplied bamboo at a special price of Rs 1 per tonne by the Kerala government for three decades. This wiped out the bamboo forests.

Resistance against monoculture plantations has been gaining ground in the district, thanks to the WPSS. In July this year, the forest department tried to clear the natural forest on 200 acres in the Perilya range to plant teak and mahagony, but locals rose in protest against it. They are demanding a relook at the forest policy and a phase-by-phase felling of teak and other plantation trees so that they can be replaced with a far wider variety. “We have to keep our eyes open 365 days, or they will go ahead with clearing off naturally grown trees,” says Aji Colonia, a photographer and WPSS activist.

Environmental activists in Wayanad warn that ecological degradation here is likely to spill over to other regions. The river Kabani provides 100 TMC of water to the Cauvery every year. Farmers on the Karnataka border are also dependent on the Kabani.

With Wayanad becoming a weekend destination for tourists from Bangalore and other closeby cities, a new set of problems has cropped up. “Concrete structures are being built on the top of Brahmagiri hills (the origin of the Kabani) that are falsely claimed to be temporary. Private players in the tourism industry are adding to the ongoing ecological crisis,” says Badusha.

BRAHMAGIRI IS THE highest Western Ghat hill in Wayanad. A journey to its top reveals the extent of the damage. You can see shaven slopes and vast tracts taken apart by rock miners. It has even claimed the popular tourist attraction Phantom Rock, a formation in the shape of a man. “The rock mining around Phantom Rock has become a huge threat to this area,” says Thomas Ambalawayal.

The WPSS is also fighting against illegal construction in Muneeswaram Kunnu, a part of the Brahamgiri hills that is home to rare species of wild birds and animals. “Edible-nest Swiftlet, a small bird of the Swift family, is seen in plenty in Muneeswaram Kunnu. It uses it saliva to make nests, which have huge market demand. It is used to make soup that is said to have medicinal qualities,” says Wilson Kuriakose, a bird watcher and a native of Thirunelli. Many come here just to collect nests and sell them, which environmentalists are afraid will lead to the elimination of these birds from the region.

According to a Kerala Forest Research Institute study, the deterioration of the once contiguous and diverse forest ecosystem of the Western Ghats was the result of deforestation that led to habitat fragmentation into ‘islands’. This, in turn, affected the region’s wildlife, especially its larger mammals. These islands have suffered further degradation on account of encroachments, developmental programmes and unscientific land-use patterns. Many plant species that used to be food for mammals disappeared from the Ghats, resulting in increased man-animal conflict. Crop raids by elephants, for example, have become common in these parts.

Pepper, for which Wayanad was once known, is fast becoming history. The pepper plant requires a long normal rainy season and fairly high temperatures with partial shade for its best yield. Low and erratic showers have had a devastating impact on pepper cultivation. In addition, there is quick wilt disease brought on by a fungal attack on the fibrous roots of the pepper vine. “Pepper is a past glory,” says Thomas Varghese, a farmer at Pulppalli who used to cultivate the spice on four acres till 2012. “I had huge losses for three consecutive years due to quick wilt. Why should I try my luck again?”

Farmers committing suicide is not even news here anymore. It happens every year. Only large-scale coffee growers are assured of a safe crop. A ride through village roads reveals artificial showers over banana plantations. Small-scale farmers, however, can’t afford such irrigation and simply wait for their plantations to die.

Any solution for the crisis needs to start with a change in attitude, according to Harish Vasudevan, an environmentalist and lawyer. “Forests and mountains are not moneymaking machines,” he says, “There is something called wildlife and we have a responsibility towards it.” Sadly, trustworthy information is scarce. In 2014, Wayanad and Idukki saw resistance to recommendations of the Madhav Gadgil Committee, a panel of experts on the Western Ghats ecology. Local farmers and villagers were misinformed about their livelihood being affected by moves which sought to protect the region’s environment. According to observers, outfits like the Indian Farmers Movement played a lead role in disseminating false information.

No lessons have been learnt from the alarming signs of climate change all around, it seems. Consider the proposal to build a forest tunnel connecting Kozhikode and Wayanadu that will run parallel to the Thamarassery Ghats. In his answer to a question in the state Assembly on October 6th, 2016, G Sudhakaran, Kerala’s minister for public works, said that Rs 20 crore has been allocated for preliminary work. There was no mention on whether the government has sought an environmental clearance for it.