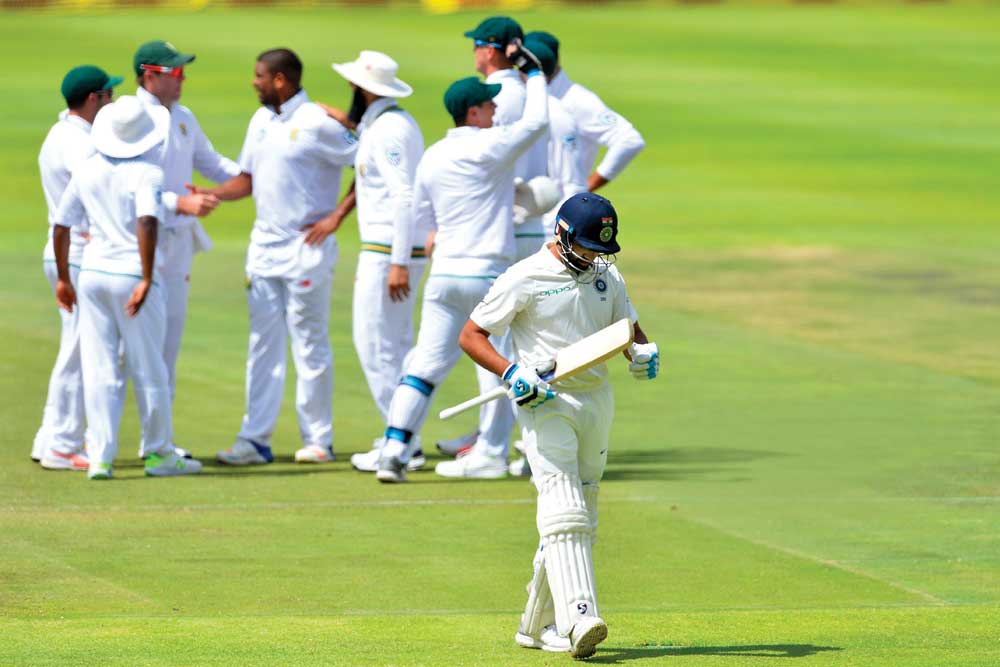 VIRAT KOHLI IS on his smartphone. Perhaps checking his Twitter mentions. Or even staring into a locked screen. It’s hard to tell. But in the short space of time between the end of a Test match and the beginning of a press conference, the phone is the Indian captain’s only companion. In Pallekele, Sri Lanka, where India played and won their last overseas Test assignment in August 2017, Kohli waited at the back of the room, one leg propped against a wall, immersed in his phone even as his opposite number, Sri Lanka’s Dinesh Chandimal, was grilled by the Sri Lankan media. On January 8th, after India’s 72-run loss to South Africa in the first Test in Cape Town, the phone was under his chin again, as he made his way to the clutch of mics placed on a dais.

Here, just as Kohli’s phone disappeared into his pocket, he was surrounded by some 20 more, belonging to the press. Not very often since he had taken over full-time captaincy of the Indian Test team had he arrived in front of the media as the losing skipper. On just two occasions, in 31 Tests, spread over three years. Rarer still was Kohli fielding questions on a loss despite his bowlers (for long the weak link in overseas Tests) having taken all 20 of the opposition’s wickets. The bowlers, especially India’s four pacers—Bhuvneshwar Kumar, Mohammed Shami, debutant Jasprit Bumrah and all-rounder Hardik Pandya—had twice helped the team breast ahead; first when Bhuvneshwar had alone reduced South Africa to 12/3 in the first innings and again when all four of them had bowled out Faf du Plessis’s side for 130 runs in the second innings.

So, Kohli was asked if he ‘feels for his bowlers’. “Definitely, because they bowled their hearts out,” he said. “At the same time they know that [they] can repeat that performance and if we get a lively wicket again we can exploit those conditions also. But we need to be better with the bat, there is no question about that. We can’t have collapses, maybe two wickets [falling] together is fine but three and four is a bit too much.”

This was Kohli, the batsman, speaking. Taking one for the team (literally), steering the press to blame the batsmen, a blame he was ready to burden. The media, however, didn’t take the bait and questioned Kohli on his selection skills, the playing XI and those left on the bench. It will be fair to add that, Kohli, the captain, wasn’t ready for it. “Not everyday do we see the vice captain of a Test team and a batsman of the quality of Ajinkya [Rahane] being left out of the team. What made you play Rohit [Sharma] instead of him?” he was asked.

It is no secret that Kohli has assumed singular control over the Indian dressing room: its affairs, who stays and who goes. Had former India coach Anil Kumble been in this management that sat in the second tier of the Newlands ground, there could’ve been a debate over which of the two power centres in the team, captain or coach, had signed his name below the controversial playing eleven changes. But in a dressing room with Ravi Shastri placed on the coach’s chair, there was no doubt over who had taken the call to field Rohit over Rahane, opener Shikhar Dhawan over opener KL Rahul, and a debutant pacer in Bumrah over the most experienced player on this side, Ishant Sharma.

These moves, ostensibly made a day before the match, and not the match itself, have been widely flagged as the reasons for India’s loss. Even Du Plessis, South Africa’s captain, admitted to finding the changes “surprising”. “We didn’t think Bumrah would play. We know he’s done really well in one-day cricket, but we were preparing more for the other seamers because they’ve played a lot of Tests,” Du Plessis said at the presser. “The other guy was Rohit ahead of Rahane. He’s been in a bit of form one-day cricket wise, so they’re probably just running with that.”

As a rule of thumb, Indian captains are far more guarded than their international counterparts; it isn’t called the toughest job in sport for no reason. Kohli cleared his throat and replied: “Well, we decided to go on current form. Rohit has scored runs in the last three Test matches that he has played, and he was batting well, even in the series against Sri Lanka.” Then, he paused, blinked and added: “Look, these things can always be looked at in hindsight—thinking ‘what if’ or ‘what if not’. But we decided to go with this combination and current form was definitely the criterion.”

Over the last month, Rohit scored an ODI double hundred and the fastest ever T20 hundred. Both against Sri Lanka. Both at home. But there is a remarkable difference between being in smoking hot batting form in short-format cricket in the Subcontinent and having the ability to play Test cricket in countries such as South Africa. Away from home in Test cricket—and this includes playing in conditions similar to India such as in Sri Lanka and the Caribbean—Rohit averages 25.11 runs an innings and has a top score of 79. Scored in Colombo, Sri Lanka. In all, he has scored a total of four fifties, two of them in—you guessed it—Sri Lanka.

Meanwhile, Ajinkya Rahane, the man Rohit replaced, averages 53.44 runs an innings when he is playing in overseas Tests and has hit six out of his nine Test hundreds away from home. He has a century in Sri Lanka, a century in the Caribbean, a century in New Zealand, a century in Australia and four runs short of a century on his previous tour of South Africa. On that tour, back in 2013-14, Rahane scored 209 cumulative runs in four innings. Rohit, in the same spread, scored 25.

It is no secret that Virat Kohli has assumed singular control over the Indian dressing room: its affairs, who stays on the field and who is left out

Yet, here Rohit was batting in the team’s whites. And here Rahane was serving drinks in the fluorescent yellow bib. Perhaps because Rahane went through a patch at home against Sri Lanka in November last year, where his scores across five innings were 4, 0, 2, 1, 10. But according to Kohli, it was more due to the fact that in the same series, Rohit scored 102 not out, 65 and 50 not out. But in each of those innings, Rohit walked in when the pressure of survival was off, with India looking for a declaration at 399/3, 361/3 and 106/3, respectively.

THE ABSURD BRILLIANCE of Monty Python has penetrated the Capetonian tongue. Here in the south- western edge of the continent, the locals working in the service industry—as taxi drivers, or waiters in restaurants, or bouncers outside nightclubs—tend to use a catchphrase when dealing with tourists who speak with heavy foreign accents.

The phrase first came to my attention at a hole-in-the-wall, all-day breakfast joint in the touristy bylanes of Long Street in central Cape Town. Fed up with an order, the waitress turned towards her colleagues and uttered the phrase, who, in turn, combusted into shivers of laughter. Speaking Xhosa, she had said (words which she patiently repeated for my note), “Inqwelo fezu kwa manzi izele ziplanga.” Which, in English, literally means: “My hovercraft is full of eels.”

Invented and immortalised by John Cleese in a sketch called Dirty Hungarian Phrasebook—where Cleese, playing a Hungarian in London, walks into a tobacco shop to buy cigarettes and reading from a phrasebook, says ‘my hovercraft is full of eels’—the phrase has now come to define incoherence, or not understanding somebody.

Perhaps because I heard it on numerous occasions during the week of the Newlands Test in this city or perhaps because of its strong imagery with a sinking ship, this was the phrase that popped first into my mind as the last of 10 Indian wickets fell in the space of a session to hand the Proteas the first Test and control of this series. Somewhere along the way, India’s will to win on these shores too is lost in translation.

To only blame Rohit’s presence, or Kohli’s decision to include him in the side, would be unwise. Dhawan’s inclusion in the team was almost as unpopular with the fans. More so, once Kohli gave his ‘hovercraft and eels’ explanation for excluding KL Rahul. “Well, the left-hander [along with a right-handed opener] always helps, that’s what we felt,” Kohli said. “I mean it’s difficult for the bowlers to set their lines and lengths every time with the strike rotating well. It has worked for us in the recent past, and that definitely is a combination that a lot of international sides want to go with these days, because you don’t want the bowlers to settle against one line and length, especially with the new ball. That’s the idea behind it.”

Since Australia visited India in February 2017, Rahul has scored a fifty or two in each of the eight Test matches he has played in, bar one. Versus Australia he had an innings of 64 in Pune, 90 and 51 in Bangalore, 67 in Dharamshala. Then, against Sri Lanka, there was a 57 in Colombo, 85 in Pallekele and 79 on the incredibly difficult pitch of Kolkata. Only in Nagpur, in what was his final Test appearance, did this run of form stop, where he batted just once and scored 7. But the fact that he was a right-hander and not his form was used as a measure in Newlands; out he went and in slipped Dhawan.

Twice India were presented with the best batting conditions and twice did Dhawan put the team on the backfoot by throwing his wicket away. On the first day, well after the demons in the pitch had eased out, Dhawan had the task of seeing 11 overs that India had to bat till stumps.

Dhawan, quite like Rohit, enjoys filling his coffers against Sri Lankan bowlers. In the last international that he had played before this tour, an ODI in Visakhapatnam versus the Lankans, the left-hander had struck a hundred. His two Test hundreds last year had come against the same side as well. Perhaps mistaking Steyn, Morkel, Philander and Rabada for Lakmal, Gamage and Perrera, Dhawan made the fatal error of confusing attack for defence. Where caution was the need of the hour and not a minute more, Dhawan struck three streaky fours and while attempting a fourth, he top edged Dale Steyn and didn’t even bother to wait until the catch was taken.

A similar pull shot in the second innings was mistimed as well, giving Morne Morkel and South Africa their first of 10 breakthroughs in that session. Less than two hours after Dhawan’s wicket, India were bowled out for 135, in 42.4 overs. “Look, [South Africa] too had their share of collapses,” Kohli said. Looking inward a short while later, he added: “Everyone in the change-room is really disappointed with today’s effort because we were feeling really good at lunch when we restricted them to under 210. To not having got the job done, it hurts and it should hurt because that’s the only way you can rectify the mistakes and come out with more motivation in the next match.”

Having said that, Kohli left the press room and began crossing the field towards the waiting team bus. Under the cold and dark shadow of the Table Mountain, the silhouette in white disappeared from view within a few steps. And all that could be seen in the distance was the dim glow of a smartphone.