The tragic demise of Ranji Trophy 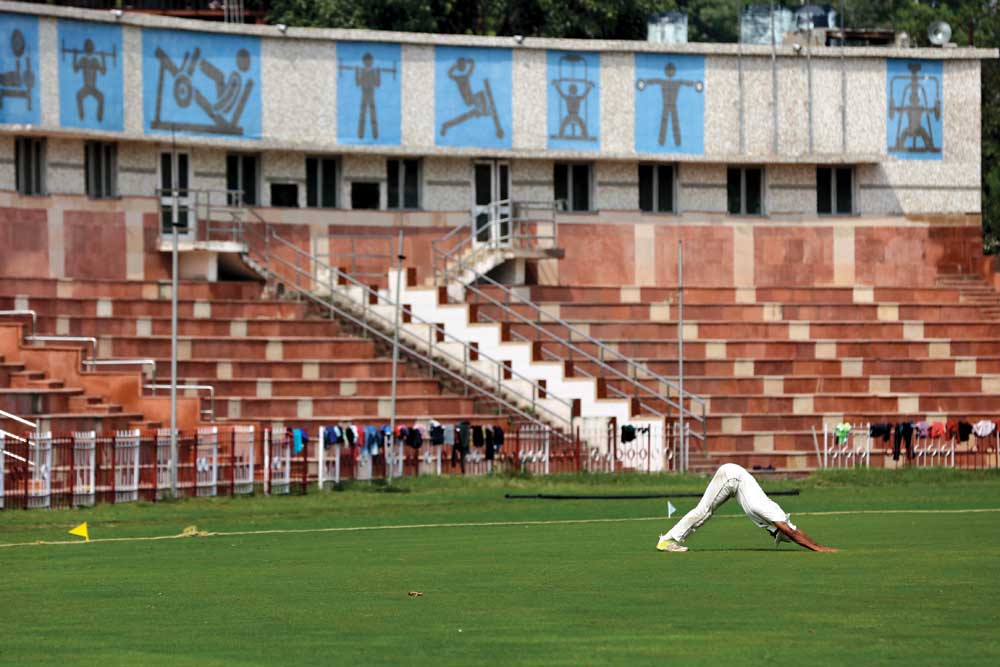 Two boys, dressed in identical cream shirts and greased leather shoes, have stopped by a fenced field off the busy Dwarka Road in Delhi. An ongoing game of cricket has piqued their interest. As they press their little faces between iron railings, cars whiz past their school bags.

Inside the ground, the batsman—an elegant left-hander—is leaning into a cover drive, quite like Yuvraj Singh, instantly causing the comparison (“Look, isn’t he batting like Yuvi?”). The majestic stroke flattens the lush outfield and produces four runs. But unlike boundaries that growl off Yuvraj’s willow, this particular one receives no applause. Not a single clapping pair of hands.

The ground is modest in nature, housing neither spectators nor stands. Just one scorer, who has changes to make under ‘Batsman 2’ on the wooden board. He plucks out a metal plate with the figure ‘3’ from a nail and replaces it with one that reads ‘7’. Two overs later, ‘Batsman 2’ is dismissed for 9— a lazy cut off a medium pacer snatched at second slip.

The dismissed batsman yanks off his helmet, a move that forces the boys to strain hard through the railings. But the batsman’s walking in a direction diametrically away from them, towards the pavilion, with his head bowed and hair covered in a blue bandana. The boys try their luck until he disappears behind the pavilion’s shaamiana, his blade angrily scything tufts of outfield grass along the way.

“Woh Yuvi nahi hai (That’s not Yuvi),” says the boy who had made the comparison in the first place. The other spits through the fence, almost in disgust, and adds: “Agar woh Yuvi toh main Kohli (If he’s Yuvi then I’m Kohli).”

They laugh. They watch a passenger plane make its descent towards Terminal 1D. They gasp at its size. They leave.

It’s hard to tell whether Yuvraj Singh, unfastening his pads below the shaamiana at this point of time, noticed that the only two pure witnesses to his innings—his first of the new domestic season—had exited the scene.

The new Ranji Trophy season, the premier domestic competition and premier feeder to India’s premier craze, began around the country on 6 October—noiselessly, as it almost always does. At the Palam A Ground, less than a kilometre from the domestic terminal of the Indira Gandhi International Airport (as the plane flies), those watching the Punjab versus Railways match were all making their living off it—players, support staff, caterers, one scorer and three journalists. All day long, no more than 20 passersby on the Dwarka Road stop to watch the action. I know because I was counting. From 9.30 am to 5.30 pm. Eight hours. Twenty inquisitive souls.

So when the two boys popped into sight just as the most recognisable face of this fixture (unequivocally) marked his crease, I hared out of the premise to conduct my rather voyeuristic, fly- on-the-wall experiment: watch them watch Yuvraj. Would they, from 60 yards away, be able to tell? If so, would they be lured into entering the ground and watching him, if not the entire team, bat?

The first of those questions wasn’t answered and the second simply cannot be with respect to this specific ground. Yes, they might have tried to enter as all Ranji Trophy games are completely free of cost. But this land is Air Force property, after all, and a red and white signboard that reads, ‘Tresspassers will be shot’ (no time for prosecutions here) garlands the front gate.

No such threats to your life were made at the other two venues in and around Delhi that also hosted Ranji Trophy games. The first of those was at the Karnail Singh Stadium in the heart of the city, Connaught Place, where Jharkhand took on Maharashtra. Empty, despite three separate national dailies announcing a day before the fixture that Mahendra Singh Dhoni would be present at the ground for all four days as a non-playing member of the Jharkhand dressing room.

I know what you’re thinking—‘that’s not a compelling enough reason for the arena to fill to capacity’. I hear you; Dhoni, after all, wasn’t playing cricket. But just imagine the scenes if those very newspapers had announced the venue, date and time of Dhoni’s visit to a showroom or mall. In Connaught Place, no less.

The other match was at the spanking Choudhary Bansi Lal Stadium in Lahli, Rohtak, 110 kilometres, or three hours from Delhi, between heavyweights Tamil Nadu and Mumbai. Tamil Nadu, two-time champions and twice runners-up in the last five years—loaded with IPL stars. And Mumbai, 41-time winners and defending champions—laced with fringe and future India players.

As you would’ve guessed and can very well imagine, there were zero takers for the large and inviting concrete stands that envelope this rural coliseum. But can you just as easily imagine, say, the English or American equivalent of this occurrence? Can you, in your mind’s eye, just as easily picture bare-naked stands for the first league game of Leicester City or Denver Broncos, reigning champions of the EPL and NFL—premier domestic competitions of their respective countries’ premier craze?

I didn’t think so.

Now, what if I told you that those Leicester and Broncos matches weren’t televised either.

FOR THE LAST few years, Star Sports India—a network that has done plenty to promote local sports in the nation and a network that owns the sole broadcasting rights to all BCCI matches—had been televising at least one Ranji match, per round, live to Indian audiences. This year, though, that has not been the case. Reason? The Ranji Trophy is clashing with Team India’s long home season, consisting of as many as 13 Test matches against New Zealand (ongoing), Bangladesh, England and Australia (forthcoming). And several more ODIs and T20Is in each of those four series.

The Ranji Trophy has been ignored for at least a couple of decades, a far cry from the 70s when stadiums would regularly pack in 40,000 spectators for a league game

The third and final Test against New Zealand ended on Tuesday, 11 October. It was broadcast on four out of the 10 sports channels that Star have in their bouquet—Star Sports 1, Star Sports HD1, Star Sports 3, Star Sports HD3. Assuming that the same set of channels will broadcast the first ODI in Dharamsala on Sunday, 16 October, Star still had the opportunity to accommodate the second round of the Ranji Trophy, which started on Thursday, 13 October, in any of its remaining channels.

On the day the second round of the Ranji Trophy began, Thursday, this was what Star decided to fill its programme list with.

“Take these very players you see in front of you, dress them in uniforms—purple, yellow, silver, your choice. Add some dheeng- chang music, bring in gori cheerleaders to dance and desi models to do on-field interviews,” a Delhi player once told me, off-the- record, on the sidelines of yet another neglected first-class game. “Then see how this very same Ranji Trophy sells.”

Thanks to the utter lack of television cameras and autograph seekers, the players take themselves less seriously and are more approachable

We both immediately pictured a four-day version of the IPL and smiled at the audacity of the suggestion.

Quality tamasha. There was plenty of it when Mumbai last played a first-class match at the very same venue in Lahli, Haryana. The said tamasha was achieved without gaudy uniforms, awful music, Caucasian cheerleaders and Indian models with British accents. It had another ingredient—the domestic farewell of Sachin Tendulkar.

To watch Tendulkar bid adieu to his Mumbai jersey in the winter of 2013, devotees queued up in the thousands. Days in advance in fact, for a Ranji match (lest we forget) to collect the special passes issued by the Haryana Cricket Association (Ranji games, as mentioned earlier, are free).

Close to seven thousand spectators were in place for the 8.30 am coin toss. When Haryana was put in to bat, the crowd, mostly Haryanvis, groaned. (They would of course go on to cheer when their state side was bowled out for 134). Tendulkar’s innings lasted all of 5 runs and 10 minutes that day, before he was cleaned up by Mohit Sharma— son-of-soil and Team India pacer.

Mohit must’ve questioned his life choices that day. Within minutes, the stadium was vacant. And all that remained was the dregs of a domestic game.

The fact that the Ranji Trophy has been ignored by Indian audiences, including the cricket nuts, is not a new story. This has been the case for at least a couple of decades, a far cry from the 70s when stadiums would regularly pack in 40,000 spectators for a league game. The story that is new, and remarkable, is how the Ranji Trophy continues to be ignored by Indian audiences in a day and age where they’ve embraced everything from kabaddi to a version of football that is semi-domestic, semi-veteran.

Which brings us to the million dollar (or Rs 2 crore, the winners’ cheque for this season) question: With no TV or live audiences to speak of, has this 83-year old tradition completely lost its relevance?

“As far as relevance is concerned, the Ranji Trophy is always going to be relevant. Where else are the selectors going to find Test cricketers? From the IPL?” the same Delhi player chuckled during our freewheeling chat. “And to be completely honest, as long as just five people in all of India watch us, the five selectors, we’re okay. There’s something special about turning up, motivating yourself and playing in front of these empty seats.”

SOLITUDE DOES HAVE its charm. It was famously felt by Sandeep Patil, the then chief selector of the Indian team, who decided not to travel with the side to the ICC World Cup in Australia and New Zealand last year so he could witness the knock-out stage of the Ranji season.

We’ve felt it too. Thanks to the utter lack of television cameras and autograph seekers, the players take themselves less seriously and are far more approachable. Even the famous ones. In one particular Ranji game at the Mohan Meakins (the makers of Old Monk rum) ground in Ghaziabad, an Uttar Pradesh leg-spinner, still giddy from the experience of having recently represented India, seemed pretty irate while fielding for close to a session at the fine-leg boundary. A handful of fans and the media representatives were seated on plastic chairs immediately behind his fielding position and one spectator decided to ask him what’s wrong.

Without missing a beat, the leggie turned around and deadpanned: “Indian team mein to mil jata hai. Shayad iss UP ka kaptaan ko lagta hai main batsman hoon (I get to bowl when I represent India. Perhaps this UP captain mistakes me for a batsman).”

Nothing sums up the unique fan experience of the Ranji Trophy quite like the following story. A senior cricket reporter, covering a Mumbai-Saurashtra game at the Bandra Kurla Complex in Mumbai, had dozed off in the stands while the opposition was batting. The fielders, led by Mumbai captain Wasim Jaffer, noticed the reporter and shared a quiet chuckle.

About an hour later, Saurashtra had been bowled out and the Mumbai players began their walk back to the dressing room. While nearing the boundary, Jaffer noticed that the tired reporter had not yet snapped out of his snooze. So he quickly changed direction, reached the stand concerned and got hold of the person seated beside the sleeping reporter.

“Please wake him up in ten minutes,” Jaffer said. “And tell him Wasim Jaffer is about to bat.”