Cricket: All is Lost

Despite having the squad and resources to do well abroad in Test cricket, Virat Kohli’s men begin 2018 with a series surrender in South Africa 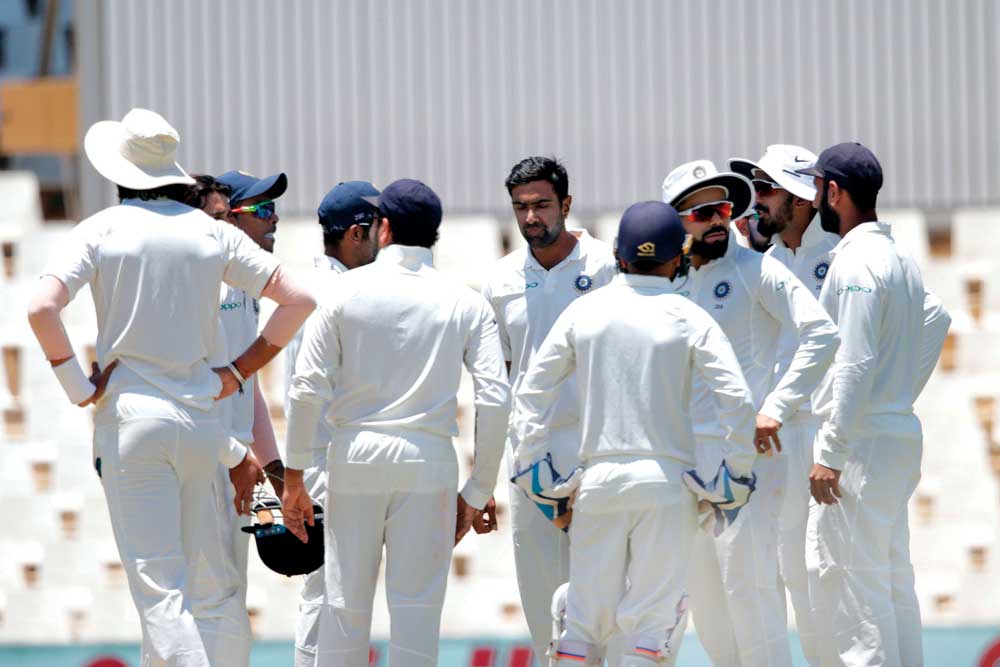 AT THE STROKE of lunch on the fifth and final day of the Centurion Test, 11.59 am on January 17th, Rohit Sharma swivelled majestically on one foot, his upper torso twirling as he looked to complete his hook shot against a Kagiso Rabada short ball. The last two times he had attempted this very stroke—aggressive in nature and far more suited to limited overs cricket—in Rabada’s previous over, Rohit had earned two boundaries; one controlled past fine-leg and the other directly over the wicketkeeper’s baggy cap. These two shots, two of the many that he had struck this morning, had taken his personal score deep into the 40s. And as the ball soared high up into the Highveld air, Rohit was a bounce of a cricket ball away from becoming the only Indian batsman to score a half-century in India’s chase.

You are perhaps aware of what happened next, but we must first address the state and position of the Indian cricket team—and Rohit Sharma—on this tour of South Africa when this shot was played, so kindly allow the ball to linger in the blue Centurion skies for just a bit longer.

On a wicket that South Africa’s veteran fast bowler Morne Morkel had labelled “one hundred per cent Indian” due to its slow, low and abrasive nature, India had collapsed to 26/3 at the end of the fourth day in conditions more familiar to them than the South Africans, during their chase of 287 runs. Here, at the fall of the third wicket (captain Virat Kohli’s for 5), Rohit should ideally have appeared in the middle and reappeared in this story. But in walked India’s wicketkeeper, Parthiv Patel.

Now, Patel is not half the batsman Rohit is in any condition— home or abroad. But the decision to send him ahead of Rohit was seen for what it really was; a move to shield Rohit from the South African pacers at the fag end of a rough day. Or worse, a move to protect captain Kohli from his critics at what already seemed like (1-0 down in the three-match series at this point and on the verge of a series defeat) the fag end of a rough tour. For it was Kohli’s decision to field Rohit, a proven failure of sorts in difficult overseas conditions such as these, in the playing eleven for both the Cape Town Test and this one in Centurion in place of Ajinkya Rahane, vice captain of the Test side and, more importantly, a proven success in the toughest of conditions. It was a most controversial selection to say the least, and neither his presence in the team nor lack of it in the middle late on Day Four inspired much confidence.

Rohit Sharma’s was a most controversial selection, and neither his presence in the team nor lack of it in the middle late on day four inspired much confidence

Patel played his sacrificial role with honour, putting his body in the way of his wicket and getting battered this way and that, but somehow delaying his dismissal and significantly, delaying the entry of Rohit to the crease. Rohit was playing this Test, and this series, based on his recent form—form that had seen him hit an ODI double century and the fastest ever T20I century, both against Sri Lanka back in December 2017, both at home in India. This was finally his chance, a golden one at that, to set a few things straight: a) to prove that the think-tank hadn’t gotten it wrong to play him in an overseas Test series and b) to prove that the think-tank had indeed gotten it right to protect him until the fifth day.

When Rohit finally walked in, at the fall of the fourth wicket early on Day Five, every follower of Indian cricket had his or her eye peeled on the batsman’s every move, his every breath. Some of these eyes were sympathetic, but most of them were fiercely critical. With Rohit stranded at the wrong end of the crease (or should we say isolated strategically by the South Africans), India further crumbled from 49/4 to 87/7 in the space of 10 overs. And right then, a most unusual situation presented itself as a lifeline to Rohit Sharma. On an Indian-like wicket that he was so used to scoring big runs on and without the pressure to deliver a victory (the situation was all but lost), Rohit suddenly had the freedom to treat this moment like he would a short format contest and play the game he knew best, one-day cricket.

He clouted the spinner, Keshav Maharaj, for a four and a six in one over and later pulled and hooked Rabada for two more boundaries. But a minute before lunch, when he took on Rabada once more (and this is where we shall un-pause the Rohit shot hanging in the Highveld air), Test cricket caught up with him yet again. Diving face first towards the ball at fine leg, AB de Villiers took the catch and the one-day expert playing a one-day knock was gone for 47, and not long after, India’s campaign in South Africa came to an end in 50.2 overs—two balls more than a full- length one-day innings.

Squads don’t win tests, playing elevens do. And everyone will tell you India did not once choose the right eleven. Kohli disagreed rather vehemently in a funereal press conference

This, however, was Test cricket and Test cricket away from home at that. And yet again, India had conceded a series abroad even before the series had officially ended.

“WHAT IS THE best eleven?” —Virat Kohli, Indian cricket captain.

For perhaps the first time in the history of Indian cricket, the autopsy conducted on an overseas Test series demise ended up dissecting not how the team lost, but why they lost. Before the much-awaited series began, every fan worth a judgement had adjudicated that finally, India had a squad to not just compete in radically challenging conditions abroad such as these, but even push for a win. Even the distressed and the deflated after this series loss will tell you that India did compete in South Africa 2018. In the first Test match in Cape Town, India often looked the better side and even found themselves just 177 runs away from snatching the series lead, with all 10 wickets in hand. And as far as Centurion is concerned, India did not lose the match until the dregs of the fourth day, when long evening shadows added to the solemn mood in the Indian dressing room.

The problem, however, lay in the fact that squads don’t win Test matches, playing elevens do. And everyone from the supporter on the street to the pundits in the papers will tell you that India did not once choose the right eleven for the two Tests that have so far been played in South Africa. Kohli, however, chose to disagree rather vehemently in a funereal press conference after the second loss, where he took the hot seat with more tattoos than emotions. With each passing question, however, his poker face wore off and soon, there were tell-tale signs of him holding a bad hand.

Journalist: How much does this [Centurion] loss hurt because you were not able to field your best eleven?

Kohli: What is our best eleven?

Journalist: The one that could win this match.

Kohli: Had we won this match would you have called it the best eleven?

Journalist: But you did not win it.

The above exchange took place between Kohli and an Indian sports reporter. But when he was fielded a similar question from a South African journalist, the gloves came off. The question had to do with the statistic that Kohli, amazingly, in his 34 Test match reign as Indian captain hadn’t once fielded a team without a change from the previous match. This constant ‘chopping and changing’, he was told, could have resulted in India’s tour loss.

Question: I think you would know that to win Test matches you would need consistency and your team choices have lacked that. Can you expect to keep doing that and expect different results?

Kohli: How many of those matches you mentioned did I win?

Question: How many did you change it in?

Question: How many of those were in India?

Kohli: I’m here to answer your questions, not fight with you.

This was always going to come back to haunt Kohli; the fact that most of his wins in Test cricket arrived on Indian soil because of the sheer number of games India played there in the last couple of years, given the BCCI’s influence in setting the international programme. Kohli remained adamant that playing almost exclusively at home—between 2015 and now—had little to do with the eventual result here. But that only further exposed him, as a captain, to a sucker punch: being held responsible for fielding the wrong eleven. No one, outside the Indian dressing room that is, will ever believe that opener Shikhar Dhawan was suited for the first Test in Cape Town, in zigging and zagging conditions. Or that Rohit Sharma was suited to play Test cricket anywhere outside of India. Not on form and not on numbers. Not in place of Ajinkya Rahane, in any case.

And herein lies the trouble. It could well be that there are (given the depth in our talent and squad and the different permutations) many best elevens on this Indian side, and not just one. But for this crushing defeat in South Africa, Kohli will have to live with the fact that he will forever be singled out for not picking even one of those on offer. He, after all, asked a journalist what that potential best eleven could be, even if it was uttered in sarcasm.