There’s a Scramble for Screens Out There

The more screens an exhibitor has, the greater its bargaining power with Bollywood 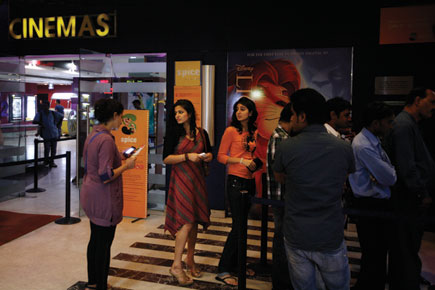 The more screens an exhibitor has, the greater its bargaining power with Bollywood


India makes more movies than any other country. But screening films is no easy business. Since 70 per cent of a film exhibitor’s revenues come from ticket sales, drawing audiences into halls is a make-or-break issue, and this depends on the appeal of products made by others—filmmakers. “Exhibitors are at the mercy of [film] content,” says Jehil Thakkar, head of KPMG’s media and entertainment practice. “It’s a crucial factor over which they have no control.”

To mitigate that risk, modern exhibitors have been trying to “diversify their revenue streams”. One way is to emulate the American model, where overpriced—and fat-margin—food & beverage (F&B) servings account for half their sales. The Indian theatre average is just 20 per cent right now. But with so many players focusing on well-off viewers who shell out almost Rs 500 per head on a film-cola-popcorn outing, that figure will probably rise. Global players like Cinepolis have entered India, and domestic multiplex firms such as PVR that are keen on this model want to enlarge their screen presence.

With fewer malls being built because of India’s real-estate slowdown, acquiring existing halls is part of their agenda.

Ownership of a large number of screens could enhance an exhibitor’s bargaining power vis-a-vis film producers. Amit Patil of Angel Broking says that market leader PVR has taken a financial hit lately only because it “decided to borrow heavily to expand its screen clout”. In its quest for scale, the company acquired Cinemax (about140 screens) late last year, and aims to raise its screen count from the current 350 to about 500 by the end of 2014-15, says Patil.

Other exhibitors like Big Cinema and Inox, which have about 250 screens each, are making efforts to keep up. Bollywood is watching. Now that almost two-thirds of a major film release’s box office total is generated by the 1,600 odd multiplexes in the country, film producers are already under pressure to part with a larger share to big exhibitors.

Big players also have it easier garnering revenues from in-theatre advertising, since they can offer advertisers considerable reach through a single-window deal. Analysts say that such ads make up only a tenth of an average exhibitor’s topline. On the whole, however, what the industry needs are hit films. The past year saw several of these, helping exhibitors raise ticket and F&B prices to up profits. Yet, what India needs even more is a screen expansion effort that draws in millions of more film fans who cannot afford multiplex prices.