The death of an authority symbol 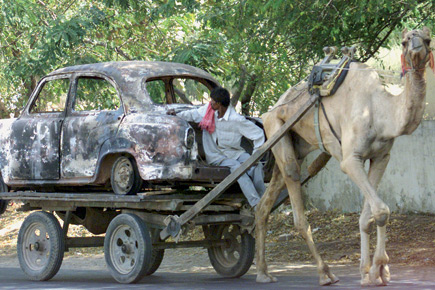 On 24 May, Hindustan Motors (HM) indefinitely suspended work at its Uttarpara plant in West Bengal, throwing into doubt the future of the venerable Ambassador. In a terse filing with the Bombay Stock Exchange, HM declared itself afflicted by worsening conditions, including ‘very low productivity, growing indiscipline, critical shortage of funds, lack of demand for [its] core product— Ambassador cars—and a large accumulation of liabilities’.

Halting the Ambassador’s assembly line was perhaps an inevitable decision with HM in the throes of a crisis that has claimed several senior members of its Board; Managing Director Uttam Bose, CFO Yogesh Goenka and Director Kranti Sinha all resigned on 9 May. Apart from sclerotic sales (perhaps 2,200 Ambassadors were sold in 2013-14), HM is in a legal bind over its 2006 sale of 314 acres of land to the Shriram Group. The government of West Bengal is owed Rs 194 crore in taxes on the sale; both companies are now in a fix, as the state government has refused Shriram permission to start construction on the land until the dues are paid. Strapped for funds, HM even tried to hawk its Tiruvallur plant in Tamil Nadu to raise an estimated Rs 150 crore. This did not work out. What HM has done instead is transfer ownership of that plant to Hindustan Motors Financial Corp Ltd, a group company. This decision was taken late last year, and HM’s Chairman CK Birla stepped down just days after it. The transfer, executed on 31 March, was followed by this May’s Board exodus.

In all this, West Bengal’s government appears keenest to set HM’s assembly lines rolling again. On 27 May, its Labour Department convened a meeting to find a way to keep the Uttarpara plant open. The state’s Labour Commissioner Javed Akhtar has contended that, “Hindustan Motors management [could be persuaded] to lift the lock-out”.

Market observers see that as a forlorn hope, a case of market naivete. Despite its iconic status as a sarkari set of wheels ever since its 1957 launch, the Ambassador no longer sells enough for viable mass production. While it survived the Maruti revolution, the past decade has seen this gas-guzzler’s sales shrink rapidly. In 1991, it still had a fifth of India’s car market— down from over two-thirds at its peak. Now it has less than 1 per cent. Even the Government, of late, has been buying Maruti SX4s for its officers. And India’s new Prime Minister is no fan of old authority symbols either.