The Best Way to go Bust in India

Bankruptcy Code: Why every failure deserves a fair shot at survival 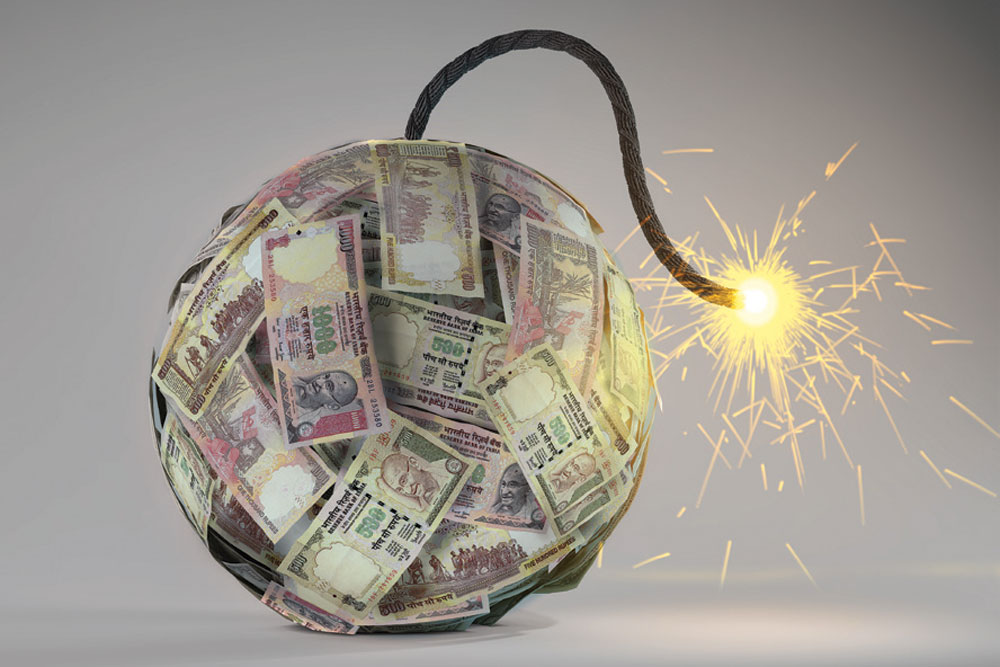 AT ABOUT TEN minutes past 11 am on 16 May, the Sensex of the Bombay Stock Exchange was at a level of 25,376, which, give or take a few minutes, is eerily where the index was exactly two years earlier in a surge of investor exuberance whose roots lay squarely in news of Modi’s majority. What has gone up is overall market capitalisation. On 16 May 2014, all of BSE’s stocks taken together were worth Rs 80.6 lakh crore. A couple of years later, their total market value is estimated at Rs 97.2 lakh crore, up 20.6 per cent. Lots of investor wealth has been generated, and by businesses that do exist, presumably. Unlike the early 90s, when it was fun spotting zombie shares being traded long after these firms had folded up, today’s share bazaar is better governed and no longer the casino it was for a brief while after India opened its economy up.

The move towards a Free Market 25 years ago was marked most tellingly by the liberty granted to enter a business sector without a licence, the first must-have of a laissez faire economy, and the wonders of this freedom have had hosanna after hosanna sung to them. The flip-side of that principle, however, has languished in the shadows of corporate arcana: the liberty, that is, to exit at will.

Such was India’s socialist hangover that the mere hint of shutting a business down would attract knit-browed reproach. With job preservation held sacred and market reality deemed an irritant, policy was geared to send a failed enterprise into an endless loop, a regulatory rigmarole that would often drag on for longer than entrepreneurs could retain their sanity. It was a classic case of the noble deterring the novel. Setting up a business took more gall than money, expansion entailed all sorts of add-on risks, payrolls had to be kept extra stingy, and loans were hard to get—all because failure was a possibility.

Capitalism, in contrast, lets the market deal with failure. And nothing is called kaput until all hope of revival is exhausted. In a bazaar where equity is widely held and actively traded, a company that fares badly would see its share price crash, which would make it the target of a takeover by investors who reckon they have a smarter way to run it. The survival odds of a business are often boosted by a swift shift in control.

Indian companies are much too closely held for hostile takeovers. Nor do we seem ready for a dynamic form of capitalism that’s all so ‘red in tooth and claw’ as the phrase goes. It often takes an official admission of a company’s collapse before anything can be done, and it’s usually too late by then for anyone else to rescue it anyway. And if that’s not bad enough, it still takes more than four years to wind up a company.

Speed, thankfully, is the emphasis of the Bankruptcy Code that the Centre has just enacted. Overriding a jumble of old rules, the new law sets a 180-day deadline once a company defaults on loan repayments for its creditors to move in and resolve—on a three-fourths vote—what to do with it. At most, they can ask for 90 more days to arrive at a decision, failing which the company would be liquidated right away. Under the law, the money so obtained must go first to repay collateral-wielding lenders; then employees, entitled to 24 months of salary; then other lenders; and then, if any of it is left, to meet taxation dues.

So far, so sharp. Not only does this reform of ‘exit policy’ finally address the unfinished half of the Market move made in 1991, it also comes at a juncture when India’s crisis of bad loans has earned the Code popular support, thanks to Kingfisher’s brazen failure to cough up its dues. How well the new policy works in practice, however, may depend on State oversight. The Code proposes an Insolvency and Bankruptcy Board of India as a regulator of special agencies that will be set up to examine failures and offer resolution advice with the aid of professionals armed with insolvency expertise. Given the cause célèbre that Kingfisher’s case currently is (with social media baying for its cash), the IBBI regime could end up with a bias for promptly dissolving businesses that have gone bust. This would be a pity.

Socialist salvation is not the answer, but capitalist reallocation, for all its flaws as a model, could yet serve as inspiration. Every failure deserves a fair shot at survival. So cast it unto the market. Convert debt to equity and let creditors act as fellow shareholders: they must either revive the business or find other buyers. Pull that plug only as a last resort.