The treasure trove of wealth under Afghan soil is an attraction alright, but security nightmares dominate. Is there a way around them? 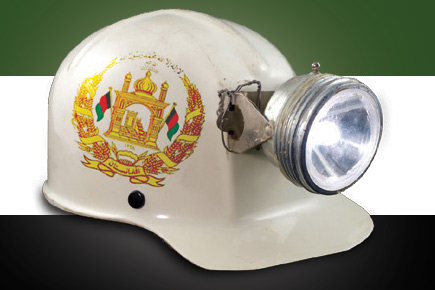 The treasure trove of wealth under Afghan soil is an attraction alright, but security nightmares dominate. Is there a way around them?


The scene is straight out of a classic Western film, a new age version of Mackenna’s Gold (1969). Except, this West is wilder. Much wilder. It is Afghanistan, after all, and gold is not the only thing with a glint under the rugged landscape. There is plenty of iron and copper and natural gas and sexily named gems such as lapis lazuli for good measure.

All told, a treasure lies buried somewhere out there that is worth $1 trillion. The finding was put into public glare by a Pentagon-sponsored study, but the existence of these reserves has been known for some time now—in fact, ever since the mid 1980s, when the Soviets carried out extensive geological surveys.

Now, a trillion dollars is a lot of money. It’s Rs 47 lakh crore: 47 followed by 12 zeroes. Roughly, that’s equal to India’s entire gross domestic product (GDP). Like in any good Western, there is one big catch, though. Call it Catch-47: Afghanistan is a mine field. Literally so.

So, how exactly do you go about exploring this opportunity? Is Corporate India excited about it?  “Last time round, we did not bid for copper in Afghanistan,” says Shakeel Ahmed, chairman of Hindustan Copper, India’s largest copper producer, “This time it’s different. We are aware of the opportunity and are keen on investing. However, three concerns will guide it. Due diligence is a critical first, since we need to scout the ground to understand the opportunity in detail. Second, we need to get an assurance of safety on the ground, without which nothing will materialise. Lastly, there is the issue of transit. After you mine, you have to transport the stuff out, and the routes can either be through Iran or Pakistan—both are tenuous at best currently.”

Another head honcho, of a Mumbai-based steel firm, is categorical: “This opportunity is dead on arrival, we do want to go in, but simply can’t. The place is not just dangerous, it’s deadly and there are issues of transparency, without sorting which out the quantum of investment required may not happen.”

In many ways, the $1 trillion opportunity remains too hot to touch. Security advisors make a case for caution as well. “We believe the security situation in Afghanistan is likely to become even more challenging, and that local providers are currently not capable of providing security at a standard acceptable to most foreign governments, NGOs and global companies,” says Patrick Toyne-Sewell, corporate affairs director of G4S Secure Solutions, a leading British security solutions firm that has operated there since 2002. If enter Afghanistan a company must, he adds, it’s advisable to hire the services of a security agency with existing infrastructure and a track record in that country, both for a proper risk assessment and operational protection. He should know. His firm has over 1,400 employees in Afghanistan, including over 700 Afghans.

If Indian firms show so much reluctance in the face of so much opportunity, there is also a political reason. Pakistan does not want India to consolidate its presence in what it considers its backyard. Pakistan is also America’s ally in its war effort there, and is so adamant about this that it recently handed General Petraeus, the new US commander of US expeditionary forces in Afghanistan, a 54-page dossier in Kabul that argued only one point—that India be kept out of Afghanistan.

For Indian firms, the most attractive mineral finds are the reserves of gold, copper and iron ore in the Ghazni region. But this is a volatile multi-ethnic area—with significant Pashtoon and Uzbek presence—from where the infamous Haqqani network operates, run by powerful warlords. To expect the writ of US expeditionary forces to run here in any meaningful way would be an exercise in self-deception. There is perhaps not a riskier place on earth for Indian companies to go digging.

Thus, the current challenges of doing business in Afghanistan appear daunting enough to put India off the opportunity. Yet, repulsion and attraction are often a matter of calculation and perspective, and high risk could also mean high returns. This explains why some companies under Indian management like Jindal Steel Works, Essar and Arcelor Mittal are thought to be exploring the possibility of going in. Nalco, India’s state-owned aluminium maker, is also looking at developing mines in Afghanistan as a way to help its plans of diversifying into such resources as zinc. Reports also suggest that Nalco, which has a war-chest of $1 billion to invest overseas, might join hands with the state-owned Nuclear Power Corp to unearth uranium deposits there.

Such firms will have to calibrate their approach very carefully in accordance with risks. Says JP Singh, information officer, Embassy of India, Kabul, “The Government of India as well as our embassy facilitates Indian and Afghan businessmen in encouraging bilateral trade between the two countries. However, undertaking business in Afghanistan without considering the security aspect is unthinkable.”

Adds Maria Kuusisto, an Afghanistan specialist at the New York-based Eurasia group, the world’s top risk assessment consultancy, “The main challenge of doing business in Afghanistan is the volatile political and security situation and related uncertainty about the future of the country. The other challenges include lack of credible investment framework, weak sectoral policies and legislations, heavy bureaucratic red tape, wide-scale corruption and inadequate infrastructure. These challenges create uncertainty about the Afghan government’s willingness and ability to respect commercial contracts as well as increase the cost of doing business in Afghanistan. Moreover, the need to build the enabling infrastructure… [is a problem which] creates major operational delays and hikes investment costs. ”

Put differently, to get the stuff out of those mines, you have to first put top dollar in first.

If there is some comfort that Indian firms can draw, it is from the remarkable determination shown by the Indian Government in pursuing its broader agenda in Afghanistan. New Delhi’s assistance of $1.3 billion has generated goodwill, and its development programme over the last nine years has focused on infrastructure, humanitarian aid and capacity creation all across the country. Kabul started getting round-the-clock electricity only after India, in collaboration with global partners, built a transmission line from Pul-e-Kumri to the Afghan capital. With Uzbek electricity available, Kabul now has arguably better power supply than Delhi does!

“Afghan infrastructure over the last nine years has made a lot of progress, but is still in a developing stage and is inadequate,” says JP Singh, “The main highways connecting Afghan cities are reasonably good, but the rural roads are in bad shape. The major issues concerning exploitation of Afghan mineral wealth are the security and transit infrastructure to export it.”

A glimmer of hope is the 18 July agreement  between Kabul and Islamabad on transit trade: Pakistan has agreed in principle to allow container traffic and truck movement across the Indo-Pak Wagah border. Says a source in India’s Ministry of Commerce, “Should this agreement be translated into action, it will go a long way in assuaging investment concerns in the transit space.” Also, note that the Khyber Pass is not the only trade route. India is busy working on a 218 km road project from Delaram to Zaranj in the Nimroz province that would allow surface transportation of heavy goods to the Iran border and further to its Chabahar sea port.

AS ALWAYS, THE CHINA ANGLE

There is the Indian way, and then there is the Chinese way. Forget the cliché about risk and opportunity sharing a common word in Mandarin, China simply moves faster than word gets around. It already has a whopping $4 billion invested in Afghanistan. China Metallurgical Group Corp has already bagged the world’s largest proven copper deposit in Aynak—an area that is ironically under the protection of the 24th Mountain Division of the US expeditionary forces. Picture the scenario: Chinese mines guarded by American soldiers!

China has three things sorted out. It has the first mover’s advantage with its Aynak mine. It is developing Pakistan’s Gawdar port, which will permit the quick transit of minerals. And China is being wooed by Kabul to develop the Wakhan corridor, a tricky terrain that thinly connects China to Afghanistan. Sultan Ahmad Baheen, the Afghan ambassador in Beijing, recently made a presentation to that end.

While Indian companies dither, Chinese firms are burrowing their way in; that China has considerable leverage with Pakistan only aids their efforts in going where American firms fear to tread. But then, it’s decisiveness that makes the difference. So what we have here is an America spending billions to keep President Hamid Karzai’s fragile government in power, even as China mines itself a fortune.

India’s diplomatic interests in Afghanistan are being bolstered by economic ones. A donors’ conference just took place in Kabul, and India emphasised its assistance in returning the country to governability (the US has made some positive noises on the value of India’s efforts), and also mentioned an interest in the minerals. If Indian diplomats can convert goodwill on the ground into a more substantive welcome now, doing business in Afghanistan could be eased.

Pragmatism vis-à-vis China’s role could also work in India’s favour. India’s National Security Advisor Shiv Shankar Menon took just such an approach on his recent visit to China in early July. After the visit, China’s Foreign Minister Yang Jiechi was quoted by the Chinese media on “the possibility of cooperation on certain subjects in other countries” and—hint, hint—three- or four-way “collaborative projects in the economic field”.

In this age of economic prioritisation, the trillion dollars buried deep in Afghanistan could well turn out to be an unlikely catalyst for a reformatted equation between India, China and Pakistan. Conversely, the race for the hidden treasure could turn out to be a tinderbox as regional powers jostle for its control.