As AdAsia 2011 gets underway in Delhi next week, it is not awfully hard to guess who will be the star of the gabfest: Steve Jobs 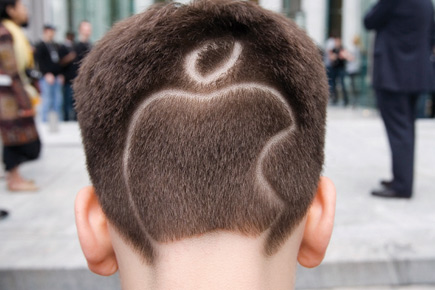 As AdAsia 2011 gets underway  in Delhi next  week, it is not  awfully hard to  guess who will  be the star of  the gabfest: Steve Jobs


Of all the things Apple founder Steve Jobs left the world with, perhaps what ought to qualify as the ‘cave paintings of the age’ are Apple’s advertisements. No kidding (even if it was a ‘toy’ computer with an irresistible ‘knowledge bite’ for a logo that started it all). If any part of his legend must make it to a tiny i-capsule shot off into outer space for aliens to get a gist of life on earth, it is these.

The TV spot that sends advertising gabfests into spasms is 1984. It features legions of stiff nobodies in rapt attention, addressed by Big Brother on an outsized screen oozing with Orwellian menace.

“Today, we celebrate the first glorious anniversary of the Information Purification Directives,” Big Brother drones on, “… Our Unification of Thoughts is more powerful a weapon than any fleet or army on earth. We are one people, with one will, one resolve, one cause. Our enemies shall talk themselves to death, and… we shall prevai…”

Big Brother gets no chance to clench his victory fist—an athlete in red shorts jogs her way up, twirls herself around, and hurls a hammer at the screen, smashing it to smithereens. “On January 24th, Apple Computer will introduce Macintosh,” you hear the adfilm’s voiceover, “And you’ll see why 1984 won’t be like 1984.”

It didn’t exactly work out that way for everybody, sadly, at least not in Delhi. But the adfilm gave us a brand that snuggled deep into the consciousness. It gave Lee Clow, its creative director at the agency Chiat Day, enough reason to crow. And it gave Ridley Scott, its director, enough inspiration to make Gladiator—arguably.

But the campaign that Steve Jobs chose to lend his own voice to, crafted after his return from exile in 1997, was the one that called Gandhi crazy—alongwith Dylan, Einstein, Lennon, Martin Luther King Jr, Muhammad Ali and even Seinfeld, among others: Think Different. “Here’s to the crazy ones,” it says (in Dick Dreyfuss’ voice in the version put on air), in tribute to the above-listed, “The misfits. The rebels. The troublemakers. The round pegs in square holes. The ones who see things differently. They’re not fond of rules. And they have no respect for the status quo… While some may see them as the crazy ones, we see genius. Because the people who are crazy enough to think they can change the world, are the ones who do.” Indeed.

Among Steve Jobs’ forgotten products is a tiny little thing called iCube, a convergence computer that wowed no one in particular. He was crazy enough to think it would click. He believed in his own ads. Now, that’s genius.