The trouble with Indian aviation 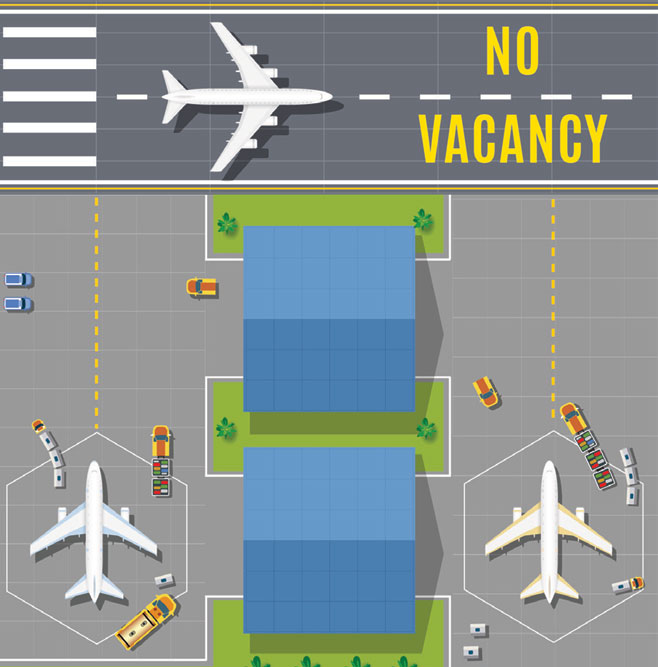 OF ALL THE temptations of a casino, the most baffling has got to be the slot machine. Why anyone would want to have a go at this fluke-box remains a mystery: nobody knows his actual odds of striking a jackpot, few recall seeing a player win anything big, and even the illusion of agency afforded by the pull of a joystick is short-lived. If it’s any consolation, these slots seem equally loaded against everybody; which is arguably more than what can be said about the Indian market for civil aviation. Here, success is hard fought if not entirely elusive, the game is fraught with factors far beyond a player’s control, and runway slots for take-off and landing at crowded airports are allotted by a legacy of the past.

The aviation scene is grim. Six years after Kingfisher’s tumble, Jet Airways has more or less gone bust. It awaits a bailout by lenders and its partner Etihad, a deal that could well see Naresh Goyal lose ownership, its debt converted to equity, and Etihad raise its stake. If its shares were widely held, we may have seen a corporate swoop-in of the sort enacted in the Michael Douglas-starrer Wall Street, but it has always been held closely by one man, its promoter, and this has left its fate largely in the hands of its creditor-in-chief SBI and Etihad’s owner Abu Dhabi. While Goyal may be forced to give up charge, he cannot altogether be elbowed aside; the Indian Government is aware that another airline’s exit would leave the market too short of carriers to be adequately competitive, and Jet’s survival now depends on his approval of a resolution plan. An outright takeover by Etihad appears remote, though, given India’s paranoid—and outdated—rules designed to keep foreign spycams out of its airspace.

Jet has been flying for 25 years and what it still has going for it are its airport slots. The state-owned Air India, of course, has the most at almost every Indian metro, but Jet reportedly has the next largest number in Mumbai, even if Delhi and Bengaluru slots are mostly held by Indigo, the market leader.

That a brawl would break out over slots was perhaps inevitable, and it has. Led by Tata’s 2015-launched Vistara, newer carriers argue that while the current use-or-lose allotment policy—by which the older lot retain all slots except those skipped more than one-fifth of the time—may be modelled on global norms, it hobbles their ability to offer a competitive flight schedule. This is unfair, they protest; it results in a monopolistic scenario and deprives the Indian flyer of a full set of choices. In response, the Government has proposed a cap on slots for each airline, aimed at freeing up space for others. This proposal has evoked groans of arbitrary intervention in the aviation market, calls for this tricky issue to be referred to the Competition Commission of India, and even suggestions of slot auctions à la airwave spectrum.

Airport constraints, of course, are partly the reason this sector can’t really operate as a proper free market. It has a big entry barrier in the form of a flying licence, necessitated by the fact that only a few carriers can share scarce resources such as aviation infrastructure and public security services. So long as this is the case, the market will be limited only to a few players and its rivalry levels will be far from ideal. Nor can the state withdraw from the arena. Regulation is de rigueur. Moreover, as a safeguard against possible collusion among private players, the country needs a state-run airline that’s answerable to people at large, the only condition being that it mustn’t distort the market by burning public funds to stay airborne and squat on slots.

It’s bad enough that carriers find it difficult to differentiate their services in anything other than frilly ways. On-time performance, the sales pitch that sprang Indigo to the top, isn’t always within the grasp of an airline’s management. One would’ve expected faster flights to act as an edge on long-haul routes, but even premium airlines have apparently given up on this idea globally. While almost everything else in life speeds up, most planes fly at a fuel-optimal 850 kmph nowadays, about 150 kmph slower than they did four decades ago. It’s high-altitude winds that are to be thanked for quick arrivals, not strategies drawn from flyer feedback.

Stripped of its glamour, aviation is just a commodity business of perishables: a seat is a seat; left unsold, it’s lost forever. Clearly, it’s no game for the weak of heart. Yet, it’s also a sector that’s vital to the economy. A clumsy yank of the lever could throw more than just the country’s skies into chaos.