Not Withering Away, Just Yet

It sells just 8,000 units a year, but the venerable Ambassador is getting some mouth-to-mouth resuscitation with a redesign that will make it look almost exactly the same. 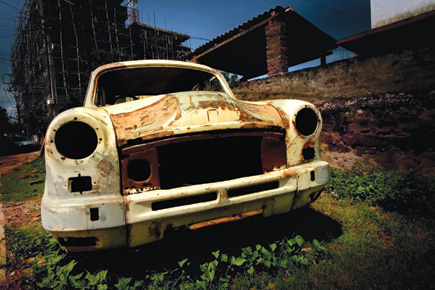 It sells just 8,000 units a year, but the venerable Ambassador is getting some mouth-to-mouth resuscitation with a redesign that will make it look almost exactly the same.


We don’t know if Gurucharan Banerjee is the only man in India who has owned and driven every model of the Ambassador in its 50-year history. But he must most definitely be among the very few. He remembers the car when it first came out. In the late 1940s, it was licenced from the UK’s Morris Motor Company, and was first known as Hindustan Landmaster. The christening as Ambassador happened in 1958. “It was quite an innovation with its fully enclosed monocoque chassis, which gave it such a large passenger space,” recalls Banerjee.

It didn’t require much to change a model those days when there was nothing really to compete against or match up to. In the mid-1960s, all it took was a minor facelift with a closely chequered grill, and the model changed to Ambassador Mark II. The Mark III came a decade later, with the same grill changing in little degrees and tweaks in the detailing of tail lights. The Mark IV followed in 1980. A decade later, when it became the Nova, the Ambassador had a newly designed steering wheel, a new steering column, plus better brakes and electricals. The Ambassador 1800 ISZ, which came two years later, was the most powerful car on Indian roads at the time. Which is still not saying much, considering that even by this time (past the watershed economic liberalisation year of 1991), only the small Maruti 800 had been added to the Indian automotive landscape.

What liberalisation promised was more competitors down the line, though these implications seemed lost on Hindustan Motors (HM), the company that made the car. When at the turn of the new millennium it brought in the Ambassador Classic—redesigned dashboard, polyurethane seats, pull-type door handles, floor-shift gears, an improved suspension, servo-assisted disc brakes and power-assisted TRW steering—the car was already fading out. The company went inexorably to the brink of bankruptcy, with accumulated losses eroding nearly 90 per cent of its net worth.

A rescue effort is now underway. A year from now, a brand new Ambassador will hit the roads. A team of Indian and foreign car styling and engineering experts has been commissioned to design it. But the car will still look exactly the same. Whether better performance and interiors will change the Ambassador’s fortunes will only be known once commercial production starts August, next year. Manoj Jha, who took over as managing director of HM three months ago, is the man behind the latest makeover. “We’ll launch the new car in the middle of August 2011,” promises Jha.

The new design, which has just reached the drawing board, is understandably under wraps. But what cagey company executives are willing to let on is that the car will be lighter, faster and more fuel-efficient. The overall dimensions will remain the same, though the passenger cabin, now 2.74 cubic metres, will be made more roomy, probably by reducing the large boot space. “The engine will be much lighter than the present one. The diesel version will give 20 km to a litre. It will have a complete driver information system, available in top models of other Indian cars,” says Jha.

The overall look has not been changed because market feedback suggests this is integral to the Amby’s appeal. “People we contacted, starting from dealers to individual and institutional users, to car stylists, strongly felt that the distinguishing external features of the Ambassador set it apart from other cars. Our brief to the body redesign team, thus, was to retain the retro look, while making it more contemporary,” Jha says. Though he wouldn’t divulge the details, it is learnt that the new Amby will have a more rounded but sleeker rear, without the small tail fins. There will be more options in car colour, fabric and interior finish. The new car will have a smaller turning radius, and engine and body noise will be reduced considerably. The suspension will get better. “The Ambassador’s ground clearance is much more than other cars’ and will continue to be so. It’ll be easier for us to introduce a much better suspension on the existing platform,” says a senior executive of the company.

The new car will cost Rs 4.5–7 lakh, depending on the model and features. The prototype will be ready for the Automotive Research Association of India’s test tracks at Pune between April and June next year. The company hopes to sell 12,000 units of the 1.5 litre diesel model in 2012, up from the 8,000 units a year of all three models (the 1.5 litre diesel, 1.8 litre petrol and 2 litre diesel variants) that it sells at present. In 2012, by plan, a petrol version of the new car will be launched.

The makeover project has car enthusiasts excited. India’s leading automobile designer Dilip Chhabria has been quoted as saying that the Ambassador in its new avatar “can turn the clock around and become a bestseller that exudes contemporariness and quality”. He has worked on the Ambassador before—he showcased a remodelled Amby at the Auto Expo in Delhi 12 years ago, and baffled by his stall drawing more crowds than the HM stall, CK Birla, the company’s chairman, had walked over to see the remodelled car for himself. Chhabria is rumoured to have been roped in by HM to be part of the makeover project this time. He was in Kolkata a couple of weeks ago and had told newspersons then that the Ambassador could become the Rolls Royce of India. “Its footprint and interior space remain incomparable. It can become a rage,” he had said.

There have been attempts earlier to upgrade the Ambassador’s looks and features, but those haven’t been successful. In 1993, Manvindra Singh had designed the Avigo. “The Avigo is a good car, but was never launched properly,” says Jha. This time HM hopes that history won’t repeat itself. It has bigger plans after the new car hits the market. A luxury variant of the new Amby is likely to be launched a year after the diesel model. CK Birla had said on the sidelines of the recent Hindustan Motors annual general meeting that the company was hoping the new-look Ambassador would become its bread earner in three to five years’ time. That, or the much-storied 50-year-old Amby might finally fade into oblivion.