Meet two of India’s new breed of education entrepreneurs: Lovely group and the Chitkaras. They’ve learnt their lessons without many degrees, and know how to cater to their market, be it the students or their potential employers 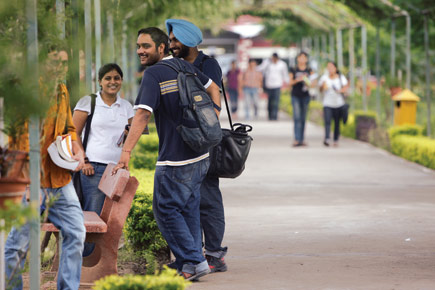 
With state governments legislating to allow private universities, a host of them have started coming up in India. They are not merely private colleges but universities, with their own syllabi and norms, oriented almost completely towards the job market. Often, they are promoted by a new breed of education entrepreneurs.

One such is Lovely Professional University (LPU), which is spread over 600 acres on the outskirts of Jalandhar in Punjab. LPU calls itself India’s largest university—it claims that its 30,000 students are the largest number on a single campus anywhere in India. They are spread over 20 academic buildings, and some 10,000 also live in the ten hostel blocks. The scenic campus is also a site of perennial construction—ten more buildings will be ready in the next two years. Of these, one will be a mall—the campus is a mini city.

The story of Lovely is a matter of great pride for Jalandhar, because it is the story of upward social mobility of its favourite sweet shop, Lovely Sweets. The shop’s facade is like any another large sweet shop. The establishment prides itself in having every sweet you’d want—its menu of sweets is called ‘Proposed Variety List’. Another shop across the road, in this busy Jalandhar market, deals with only outstation deliveries.

On the counter sits Naresh Mittal, 51. On the wall behind him hangs a portrait of his father, the family patriarch Baldev Raj Mittal, who passed away in 2004. Baldev was a military contractor in Rajasthan, and the family moved every two years with the regiment. To shield his children from a life of disruptions, he set up a sweet shop in Jalandhar’s cantonment area in 1965.

“It was an innovation of his time,” says grandson Aman Mittal, who handles media relations at LPU, “It was a closed-door shop that didn’t face the road, but one had to go inside it. Everyone said it would flop but it was a roaring success.” Middle class customers preferred to walk into a shop rather than wait on the road. “Competition made us stronger,” says Naresh Mittal, the youngest of Baldev’s three sons who mans the shop, “But we ended up defeating competition and today enjoy a monopoly in sweets. We wish we have more competition so that it takes the sweets business national and international.”

The eldest son, Romesh Mittal, dropped out of class 10 to help his father in the sweets business. It was after the shop changed two locations that it became the city’s largest sweet shop in 1986. But Romesh itched to go further. He saw an opportunity in automobile dealerships: the family also has four Bajaj and Maruti dealerships today.

“Our grandfather Baldev wanted to do something for society. He wanted to set up a temple or a dharamshala,” says Aman. It was the vision of Ashok Mittal, the second son, to get into education. They started with a management college affiliated to the Punjab Technical University (PTU), called the International Institute of Management (IIM). “People wondered what this was and what its credentials were. So the next year we advertised IIM and said it was promoted by the Lovely group. There was an immediate impact on the response from Jalandhar and surrounding areas.”

When the Punjab government passed a private universities bill to let Lovely become a university in 2005, politicians insisted on changing its name. “But for us it has become a matter of superstition that if we don’t promote something by the name of Lovely, it won’t succeed.” And he asks: “If there can be a paper called Mint why not a university called Lovely?” Backed by its reputation, university status and a big-budget advertising campaign, Lovely stands out among the private colleges that have come up all over Punjab.

In Chandigarh, 135 km away from LPU, Ashok Chitkara prides himself as perhaps the only education entrepreneur who comes from a background of education, rather than business. Born in Delhi’s Ashok Vihar in 1975, Chitkara missed the last date to apply for a bachelor’s degree in education (B Ed) at Delhi University. So he moved to Chandigarh, completed his M Ed in 1977 and proceeded to write a PhD thesis on ‘queuing theory’. He met his wife Madhu during his B Ed days, who now partners him in his education business.

Ashok taught at Punjab University’s mathematics department from 1986 to 1998, by when he had become famous as a tutor for maths, sending as many as 40 students a year to the IITs. It started in 1978, when he tutored a student at his home for Rs 100 a year. Today, he drives a Merc to the Chitkara campus—a group of colleges affiliated to PTU. There’s also a two-year-old university in Himachal Pradesh.

Last year, Chitkara shut down his coaching centre, or “showroom” as he calls it. The mantra of his centre was simple, says Chitkara, “Entrance tests have objective-type questions. So I would train students with tips and tricks, showing them shortcuts to solve questions. I would spend 13 hours a day teaching in the university and then do the coaching.”

Doesn’t he miss his super successful coaching days? “It doesn’t look nice,” he says, “that the chancellor of a university takes coaching classes. They also understand this.” Plus, there’s a bigger opportunity. Chitkara Educational Trust was established in 1998. It was the first to come up was an engineering college. Today, the campus also offers courses in hospitality, management, mass communication and education. There’s also a course in healthcare management in collaboration with Fortis.

“We are a set of private colleges on the Chandigarh campus,” says Chitkara, “but unlike other colleges, we don’t take capitation fees and have surrendered our management quota. We believe in honesty and are not here to make money.” Chitkara’s campus looks more corporate than educational, but his aim was always to have his own university. “I wanted to be an entrepreneur. I had this burning desire. My coaching was already number one, I wanted to do this next. I wondered, if I could teach at Punjab University why couldn’t I have a university of my own?” he asks. Chitkara wants to turn his Chandigarh campus, too, into a private university.

Both Chitkara and Lovely were initially affiliated to PTU before looking to become private universities. They benefitted immensely from this affiliation. At PTU, the seats are filled through counselling, where seats of Punjab University’s campus in Chandigarh are grabbed first, those in the private colleges get taken up next, and then comes the turn of other government-run colleges. Association with PTU also helps in overcoming the hesitation of students about new institutions which have no proven credibility. Once infrastructure and advertising help build this credibility over a few years, the baby is ready to break its umbilical cord from the state university.

Perhaps this is why it is not enough to cross the 60 per cent eligibility criteria for engineering courses at Chitkara University in Himachal Pradesh. The students should have taken the All India Engineering Entrance Examination (AIEEE) and their ranking in this exam is taken into account for admission.

“It was true ten years ago that government colleges were preferred over private institutions but not anymore,” claims Aman Mittal of Lovely. Talking to students in both campuses, the response to their brand names was unanimous, along with the widespread impression that no real education is imparted in state-run educational institutions anymore. But there were concerns about placement, even though both organisations claim 100 per cent success. Lovely’s mammoth advertising campaign is aimed at recruiters rather than potential students. “When our graduate goes for a job, people shouldn’t ask what Lovely is. That is the idea,” says Aman Mittal. Lovely recently organised a job fair to place its alumni affected by recession.

Aman speaks regularly of ‘the Lovely group’ even as his uncle Naresh Mittal sounds almost regretful that he is the only one taking care of sweets. “We should not forget our roots. We should fly and remain grounded at the same time,” he says. Which is perhaps why Lovely does not wish to expand beyond its 600 acres (“though we are open to buying contiguous land if available”). “There’s only one Harvard, one Stanford, one Kellogg,” says Aman Mittal. Chitkara, on the other hand, believes in the franchise model, and even has some land in Haryana that it may develop into a university in the future.

While Chitkara’s management courses emphasise an ‘academia-industry interface’, Lovely goes a step further by changing its syllabi every six months with feedback from industry. Lovely also promotes entrepreneurship, even supporting some of the efforts of its MBA students.

Both the Mittals and Chitkaras are unwilling to reveal their total investment in education, and say that the expansion is funded by bank loans.

But they are transparent in many other ways. Both have an infotech-enabled campus where parents of students get a unique username and a password, so they may check whether their wards are marked present on any given day. Attendance is marked online by teachers. Chitkara says that students call his institute’s director for administration the ‘superintendent of Chitkara jail’. “Once students enter campus, they are not allowed to leave before 4:20 pm even if parents call,” he adds. The emphasis on discipline—no ragging, no bunking, early curfew for girls’ hostels—is taken a step further by Lovely, which has surveillance cameras all over the campus, including one in every classroom and every hostel corridor. They also plan to upload lecture videos online. In another two years, the campus would have 2,000 cameras and biometric attendance (already in place for teachers). Meanwhile, students are writing exams online, and results are had instantly. “Young blood needs to be checked,” says Aman Mittal.