‘I dropped out of my MBA. Now I have my own company’ 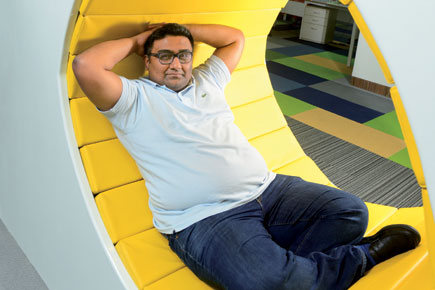 ‘I dropped out of my MBA. Now I have my own company’ On the day he made his first million all Kunal Shah wanted to do was sleep. He felt fatigued and a little nostalgic. There was no champagne or celebration. The only thing that broke the daily pattern was him going to sleep early. Because he knew the next day would bring with it an entirely new challenge.

When he woke up it didn’t feel any different, the only thing that changed was his resolve to work harder. “The challenge had become tougher because one has to stay there. So I got right back to work and did everything as I did on all other days,” says Shah, in a telephonic interview from Bengaluru.

For someone who is just 35-years-old, the CEO of FreeCharge, an e-commerce website that has a business model around recharging of pre-paid, post-paid mobile phones, DTH and data cards, is a down to earth man. And a wealthy one. On 8 April this year, in one of the biggest takeovers in the Indian e-commerce segment, Snapdeal acquired FreeCharge for an estimated US $ 400 to 450 million, about Rs 2,800 crore. His lifestyle however, remains the same, untouched by swanky cars or gadgets. “That is not my scene at all. I believe in creation and hard work,” he says.

FreeCharge.in is headquartered in Mumbai. Started in August 2010 by Shah and Sandeep Tandon with seed funding from the Tandon Group and Sequoia Capital, the portal repays the recharge amount in the form of shopping coupons. Many of India’s top retailers—McDonald’s, Barista, Cafe Coffee Day, Domino’s Pizza, Jet Airways, Croma, Puma and Shoppers Stop— are part of this shopping experience.

Shah’s first venture was Paisaback, a cash back promotions company for retailers. He soon realised that getting people to stores was difficult. But mobile stores were an exception, with people flocking in large numbers to recharge or to check out handsets on display. “I realised that mobile recharge was a huge and growing segment. What if this could be made free and the incentive used at other stores?” he says. He pitched the idea of coupons to those stores but they were not too keen. “I could not get the mobile operators and the stores to agree to the idea of giving back the recharge in shopping coupons of big stores. It took me almost a year to get them on board and convince them that it is workable and financially viable,” adds Shah.

On 15 August 2010 when he launched FreeCharge he started out with four mobile operators and two coupons on the website. The response was huge, with the website unable to handle the volume of business. In the following two months FreeCharge saw about 500 to 1,000 transactions a day. Despite this, most mobile companies were not convinced because they had their own channel for recharge through corner shops. FreeCharge however, continued to surge ahead. They were named by Pluggd. in as one of the most promising technology startups in India. In November 2012, the company was doing online recharge of Rs 60 lakh a day adding up to Rs 2.19 billion a year, say news reports.

The acquisition by Snapdeal happened because of his interest in networking with other entrepreneurs. “I am curious about understanding the internet ecosystem,” says Shah. During one such interaction he met Kunal Bahl, the co-founder of Snapdeal. Numerous meetings later, FreeCharge and Snapdeal edged towards a business deal.

Freecharge’s success is largely attributed to the unconventional marketing platform and it also leads to Shah’s belief that social media—their primary platform— is a key tool to reach the maximum number of customers. It also has other marketing avenues like campus programmes to reach out directly to students and business alliances with film production houses to promote their films. It is also the principal sponsor of Delhi Dynamos FC, the football team in the Indian Super League.

On the day the deal between FreeCharge and Snapdeal was finalised, Shah says that he felt “bereft and emotional”. “I knew that things had changed. There would not be the same kind of freedom as before. But then the company had grown bigger,” says Shah.

The market for FreeCharge is huge and continues to grow– an estimated 75 million mobile recharges take place every day but just two to three million are done online. It is this gap that Shah is keen on bridging. But there are other players in the market aiming for the same segment and Shah knows that his task isn’t easy.

Shah studied Philosophy at Wilson College in Mumbai and soon after joined a startup as a junior programmer. “I was not a very good employee. I always questioned the conventional and would want to do things differently. I was lucky that my boss believed that I was headed somewhere. So, I did have some freedom to execute my own ideas,” says Shah. He came from a business family that was into pharmaceutical distribution. He was the first techie among them. “The family business was going through a shaky period. Therefore it was easy to convince my parents that I wanted to take up a job. They let me and I began as a junior programmer,” explains Shah. He was doing his MBA then but decided to drop out. Initially, the classes were fine but then it got very boring and he wanted to study the hands-on practical side of business. “I did not attend all my MBA classes. I was completely bored by them. Eventually I dropped out of the course and now I have my own company.”

Shah’s present objective is to surpass IRCTC (Indian Railway Catering and Tourism Corporation), the largest e-commerce site of the country through which one can book railway tickets. “It has not always been a success story. There have been many failures behind every success I have seen. You have to keep going and pushing hard,” he says.