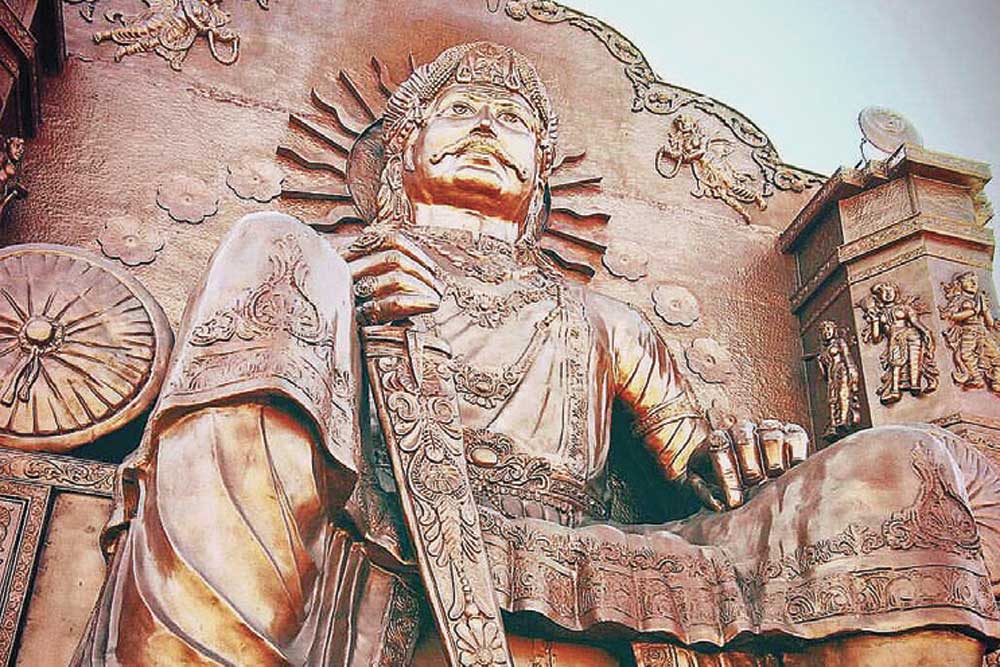 IF THERE’S A new moon in the sky, it’s Vikram Samvat 2074 already, and for of all the diyas drafted on Diwali night for divine intervention, handsets have been aburst all the same with do-it-yourself advice on how to make money. Buy shares of India Inc, they urge, as a new year’s resolution. Yes, that means now. As in rightaway. Such messages have an air of urgency that’s at odds with the timeless ethos that underlies the festival and overrides much else. “In India,” as an expat CEO once sighed, “two minutes can mean anything from ‘right now’ to an eternity.”

Time scales in this country often convey the impression of being either on pot or of cosmic insignificance, but, as my research resolution for 2074 reveals, a date marked by Vikram Samvat isn’t just somewhat accurate, it’s highly so. An age-old ‘lunisolar’ calendar derived from the lunar cycle as the moon waxes and wanes over the period of a month, it cleverly adds and subtracts leap months to fit 12 synodic cycles—which take about 354 days—into an annual schedule of the earth’s orbit around the sun. So while day-to-day affairs go from one crescent to the next, farmers can keep their crops in synchrony with solar seasonality.

The Gregorian calendar also follows a tropical year, from one solstice to the next as an overhead sun moves from one hemisphere to the other, and since the annual span of both is the same, it takes simple arithmetic to calculate what Vikram Samvat it currently is. If it’s after Diwali, just add 57 to the Common Era figure: 2017 CE, for example, is 2074 VS. From January 1st until the next festival of lights, add 56.

Oh, wait. The day that kicks off the year is in dispute, it turns out. The dawn after Diwali is the first of a month called Kartik, but a WhatsApp contact claims to have it on the authority of an entire firmament that each Vikram Samvat begins on the first of Chaitra (or Baisakh), celebrated across north India every spring. So how does it end up in autumn? The shift, it emerges, is courtesy of a west-coast tradition of opening new ledger books on the first of Kartik, and like other things of Gujarati or Marwari provenance, it prevails in business.

While the issue of its new year may have been settled by a regional referendum, the origin of the Vikram era remains a historical conundrum. By the standard story, it is named after Raja Vikramaditya of Ujjain, a first-century BCE ruler. Its point zero is said to mark his very first victory, the climax of a three- act abduction drama in which the calendar hero overthrows a Shaka usurper who grabbed the kingdom’s throne from a king who’d been silly enough to kidnap a woman of spiritual stature and celestial influence.

The historical validity of the saga is yet to be ascertained. The earliest inscription of a Vikram Samvat date—found in Dholpur, Rajasthan—was dated back to 842 CE, which is rather too recent to satisfy sceptics. But the existence of a ruler by that name is endorsed by a text traced to the 6th century CE that speaks of his legendary love of philosophical powwows. According to this, Vikramaditya once awarded a Samkhya scholar 300,000 gold coins for his triumph over a Buddhist professor, and later gave the loser’s student a similar bounty for poking holes in the winner’s argument. Quite an age it must have been, even if what’s known of it is more mythical than factual.

Some historians, however, have an alternate version of the calendar’s origin. They say the evidence suggests it was first adopted by Chandragupta II (375-415 CE), a Gupta emperor who stretched its zero point several centuries back to suit an astrological chart, dusted off an ancient legend, added his own spin, and took on ‘Vikramaditya’ as his title. Arguments in support of this thesis tend to get way too technical, but perhaps somebody will take up the task of working out if it has merit.

Not that investors at large need care, not so long as a new year being rung in serves a jingle-jangle reminder of a jackpot to be struck. Fair enough. But they’d be well advised nonetheless not to go on a share shopping spree, at least not as punters. Pick high-dividend-yield stocks, instead, and stick to them amavasya after amavasya, Samvat after Samvat—long enough, that is, for their dividends to cover their cost of acquisition. Prices turn, but assets endure.