Indecent Mobile Proposal; Slow Down but Never Give Up; Services Rising 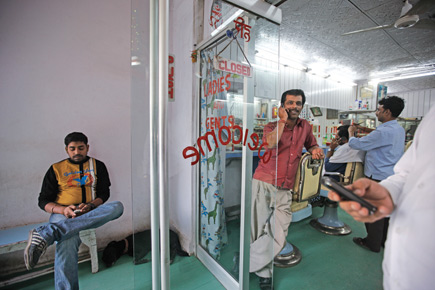 Indecent Mobile Proposal; Slow Down but Never Give Up; Services Rising

There can hardly be another country in the world with a significantly large economy that has a telecom policy as muddled as India’s. Former telecom entrepreneur Rajeev Chandrashekhar calls the policies that govern the airwaves a national shame. After bumbling along from one blunder to another, Telecom Regulatory Authority of India (Trai) has come up with new recommendations for spectrum allocation that are making many of the older operators (Bharti, Vodafone, Idea) see red. Last week it proposed that telecom operators should not be given free spectrum beyond 6.2 MHz when their licences are due for renewal. But they ought to pay up a one-time fee, on a pro-rata basis, for the remaining tenure of their licences with the 3G auction price as the benchmark. Telecom spectrum is an extremely precious commodity that’s essential for companies to roll out their services. The going rate for a countrywide 3G licence is close to Rs 15,000 crore. Currently, spectrum is allocated to companies based on the number of subscribers they manage to add. While that policy had its own fallouts, what with companies doling out ‘add-on’ mobile numbers with abandon (a major contributor to the highly inflated figure of 450 million plus ‘mobile subscribers’ claim), a sudden mid-course changing of rules will mean that companies such as Bharti, Vodafone and even state-owned MTNL and BSNL will have to cough up in excess of Rs 2,000 crore each for the spectrum. Industry insiders say these recommendations further sweeten the deal for new and controversial entrants such as Swan Telecom, Uninor and Datacom . The Cellular Operators Association of India (COAI), a GSM lobby, claims that new proposals would hamper the industry’s growth. If implemented, the recommendations are sure to pit the regulator in a messy legal battle with large telecom companies.

Slow Down but Never Give Up

What’s your preferred post-retirement destination? The hills? The beaches? Indian CEOs seem to have different ideas, largely because they don’t intend to hang up their boots so soon, even after their 60s. A recent survey by industry lobby Assocham says that CEOs and senior bureaucrats prefer tier two urban centres—such as Chandigarh, Pune, Dehradun and Coimbatore—in order to enjoy a slightly relaxed pace of life, yet giving themselves an opportunity to prolong their careers. ‘In Gujarat, Surat is rated one of the best cities where retired executives want to settle down, especially those who have entrepreneurial ambitions,’ it says. Cities that CEOs would rather avoid: Ghaziabad, Faridabad, Manesar and even Noida.

Having recovered surprisingly swift and smart from the economic slowdown, Indian industry is now beginning to show signs of cooling off just a little bit. The index of industrial output for March rose 13.5 per cent, slightly slower than the expected 15 per cent. The impact of a partial rollback of stimulus measures and rising cost of raw materials pegged industry somewhat back. While there’s no great cause for concern, most analysts believe factory output growth will stabilise at 9-10 per cent later this year. While the industrial sector would grow slower, services, that contribute a larger chunk to the country’s GDP, are expected to gallop along ensuring near double-digit growth.