On the road with Rahul Gandhi 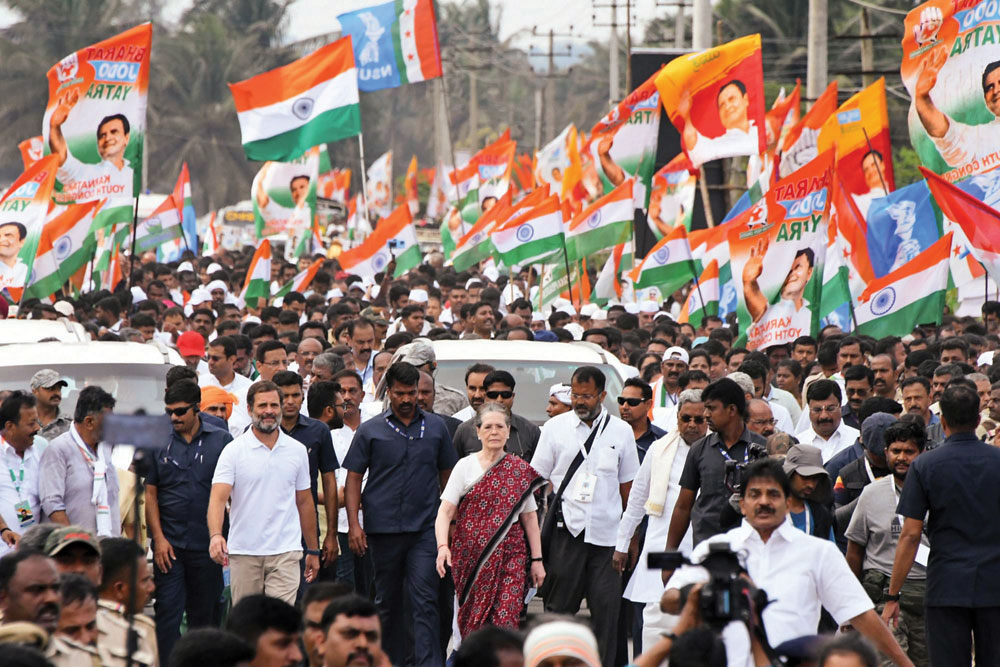 Rahul and Sonia Gandhi with other Congress leaders on the Bharat Jodo Yatra in Mandya, Karnataka on October 6, 2022 (Courtesy: AICC)


IT IS SAID that there are only two stories in the world: the hero’s journey; and a stranger walks into town. Whoever actually said it would probably raise an eyebrow at Rahul Gandhi’s attempt to star in a mash-up of the two plots. A month has passed since he took to the road to undertake what is not just a personal quest for validation as a leader but also an attempt to buoy up the sagging spirits of Congress workers. Launched on September 7 at Kanyakumari, the pun­ishingly long, 3,570-km Bharat Jodo Yatra has covered a distance of over 700 km across Tamil Nadu, Kerala and Karnataka. Today, the 52-year-old is walking through small towns and villages in Karnataka’s Tumkur district, a couple of hours from Bengaluru, surrounded by state Congress leaders, untiring party workers, youth Congress members, activists, the media, and a smatter­ing of star-struck locals and families who occasionally dart into the security cordon for a selfie. It is a sprawling celebration of humanity without the pressure of an election looming over the whole thing, or the anger of a protest march. There is no folding of hands, no stricken appeal to voters, no speeches armed with sa­tirical artillery, no fraught climate of agitation—the Bharat Jodo Yatra is its own refreshing narrative. And Gandhi is at the heart of it, walking fast, his white polo spotless, as senior party leader DK Shivakumar and former Chief Minister Siddaramaiah break into a sweat trying to keep up. The streets have never before been trod on by so many sneakered feet. The crowd swells as the morning wears on, and before we know it, the two-km-long procession has covered 12 km on foot to reach Turuvekere, the narrow road snaking through green canopies and small settle­ments where people stand on their roofs, camera phone out­stretched, to capture the spectacle of the Gandhi scion walking through their ooru.

Twenty-year-old Akshaya Gowda, wearing a blue kurta and shiny black danglers in her ears, and her friends are among the crowd waving frantically at the yatris. “We all dressed up,” she says, “Who knows, we could be on TV.” A student of engineering at a private college in Mangaluru, she had come home for Dussehra and stayed back when she heard Rahul Gandhi was passing through Turuvekere. “I would have liked to shake hands, or to take a selfie, but I couldn’t get his attention as he walked past.” Gowda says she is apolitical, but she will vote for anyone who has a solution to the unemployment crisis. “My father quit sugarcane farming two years ago and he’s out of a job. There is pressure on me to start contributing to the family,” she says. “I don’t think Rahul Gandhi has an answer to the problem, but at least he is talking about it.”

Thousands of padayatris, over 200 of them committed to walk­ing the entire length of the Bharat Jodo Yatra, march on, caps pulled down over their foreheads, wav­ing to curious crowds. Some have reached ahead to hand out water and bananas to the weary. There are busloads of people from vari­ous constituencies, “invited” by their MLAs for a day-long excur­sion, having a good time over steaming hot plates of pulao. Welcome signs and posters for as long as the eye can see, danc­ers and drummers dressed in colourful folk garb, and songs blaring from speakers take away from what would have been a tasteful outreach effort. Gandhi stops by pandals en route where villagers present him with a synoptic version of their lives. Priyank Kharge translates. Gan­dhi believes his own message is infinitely translatable—an India free of violence, hatred and crony­ism. “People have turned up as a mark of respect for a leader of his stature, but make no mistake, this is core JD(S) [Janata Dal (Secular)] territory although currently rep­resented by BJP [Bharatiya Janata Party] MLA AS Jayaram,” says AP Shankar, who runs a spoken English institute and owns a four-hectare coconut plantation. This is prime coconut country—although areca nut is increas­ingly becoming a preferred cash crop—and here, Shankar says, farmers like him take political decisions collectively. “We have nothing against Rahul Gandhi, but he brings the baggage of Congress with him,” he says. The padayatra and the Congress party presidential election, with non-Gandhi candidates in the fray, do signal a reorienting of values within the party, he admits.


The yatra halts at about 10.45AM in Aralikere, from where it will resume at 4PM. There are large tents stocked with food, water, chairs, even a few mattresses, for the walkers. A potbellied security guard in a blue suit almost pops a button regulating traffic outside the camp. “It’s going to get even more crowded,” says Mohammad Riyaz, a Congress worker from Byatarayanapura in Bengaluru, who is out in the sun look­ing for his colleagues. “Some 200 party workers are supposed to join us here today. We will welcome them with a T-shirt and a kit, and hand over the reins so they can smoothly carry on as the yatra crosses over into Telangana,” Riyaz says. “The crowds this time feel different, more welcoming. We are not going to the people with a specific agenda, nor do they have any expectations of us—a broken pipe, a stalled project. It’s good to be able to talk freely,” says MLA and former minister UT Khader, posing for selfies with some of his constituents.

Senior party leaders negotiate a mob of supporters and the me­dia to make their way into the VIP tent. Here, they relax among others habituated to wearing white, strike up conversations about life in a container, and reluctantly submit to being inter­viewed when cameras are propped up. Activist Yogendra Yadav and his crew are busy fielding questions from the Hindi media; Siddaramaiah shares a laugh with some elderly Congressmen; a group of chic, middle-aged civil society representatives from Bengaluru discuss the food scene in the city; yatris who have been on the road since Day One trade stories of blistered feet and laundry woes; someone presses a candy-pink coconut burfi into my hands. “If I had 150 kurta-pyjamas, I wouldn’t have to rush to Delhi every weekend to do my laundry,” jokes Congress MP from Karnataka Jairam Ramesh, who goes around putting people at ease, conversing in Kannada, Hindi, English with equal prow­ess. He is the one cracking jokes at journalists ahead of Rahul Gandhi’s first press conference in Karnataka as part of the Bharat Jodo Yatra—his third on the road so far—and translating for him and advising him to keep his answers brief. Gandhi digresses despite Ramesh’s efforts.

It is a sprawling celebration of humanity without the pressure of an election looming over the whole thing, or the anger of a protest march. There is no folding of hands, no stricken appeal to voters, no speeches armed with satirical artillery, no fraught climate of agitation—the Bharat Jodo Yatra is its own refreshing narrative

For long accused of toddling around in politics, Gandhi wants to show he is all in. “Thousands of crores of media money and effort have been spent in trying to show me as a person I am not. My truth is and has always been very different,” he tells re­porters when asked what the yatra means to him. “For me, the main purpose of the yatra is that I see in the political system a distance that has developed between the political class and our citizens. The idea was to go right on the road, and to go close physically to our people. This is very different from going in a car or a plane or reaching out like this to the media. There is no effort here. This is easy. I believe in tapasya. It is in my family’s nature. I wanted an element, in this effort at communication, of suffering, for myself. I didn’t want it to be easy, so that when I am talking to people I can share in their suffering just a little bit. The communication, I find, is better this way. Of course it hasn’t even begun yet–31 days, it’s nothing.”

ON GANDHI JAYANTI, he addressed a crowd in Mysore as the rain poured down on them. “Nothing can stop us,” he declared, in a myth-making moment that has gone viral. Will this yatra add to Rahul Gandhi’s political heft? One can’t say, but the metaphor of the peripatetic hero following in Mahatma Gandhi’s footsteps is a catchy one. “Within the party, there is a growing sense that he is a rainy day kind of guy,” says Gaurav Yadav, a Youth Congress member from Bihar, over chai at a tiny stall where feminist groups have been waiting with placards for two hours straight to speak to Gandhi as he walks by. “We did not expect such a turnout. If the yatra is a test of resilience and hope, he is acing it so far,” Yadav says. The women, includ­ing representatives of safai karamchari and sex workers unions, get his attention, and an endearing photo-op ensues—one of many that will help the party construct a fresh image of Rahul Gandhi as a shockingly accessible and visibly empathic leader unlike any other.

“I believe in him,” says Sneha Reddy, a dentist who flew in from New York to be part of the yatra from Kanyakumari to Kashmir. Reddy is not politically affiliated with Congress, nor is she related to any party leader. She simply wanted to experience India, and this felt like the right homecoming opportunity. “So much has changed since I left Bangalore decades ago, but right here, walking with strangers and talking to them about the idea of India, I feel at home,” she says, before speeding away in her sari to catch up with other yatris. Behind the walkers, a trail of cars, gensets, trucks and 60-odd containers bearing messages in Indian languages against corruption, price rise and hate politics blocks the road.

Can the Bharat Jodo Yatra make people feel they are taking part in something bigger than themselves, and thereby, command their support? Importantly, can it stem the decay within the Grand Old Party before its last frail ramparts collapse? Whatever path Rahul Gandhi has constructed for himself, it is a path all the same. It remains to be seen if his arrival at his physical destination will also be an arrival at the moment of truth in fulfilling what he believes is his destiny.