The Party and the Parivar 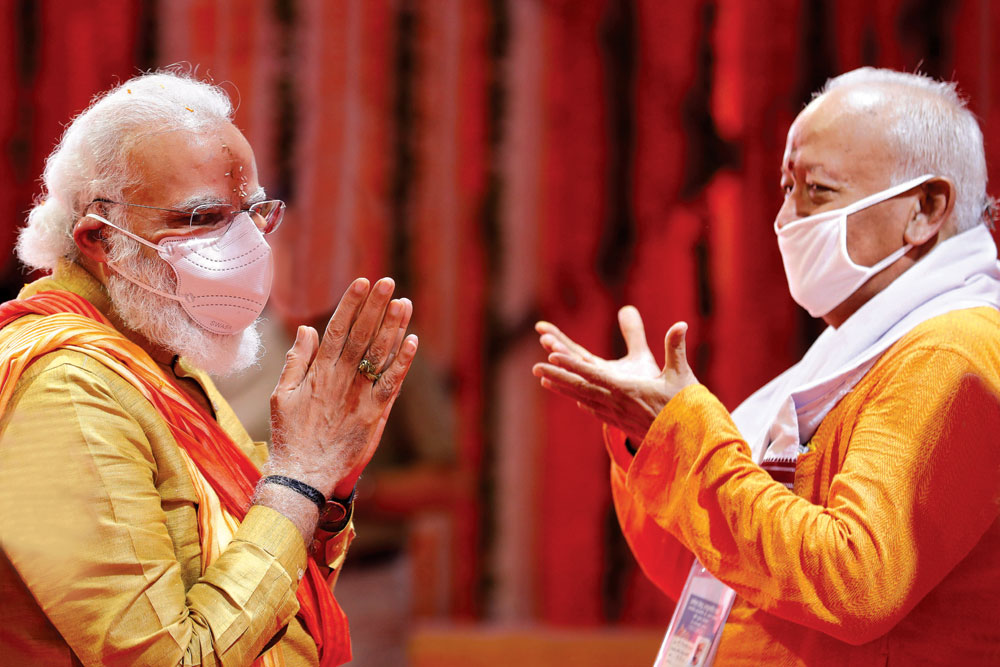 
ASK ABOUT ARUN KUMAR, the newly appointed interface between the Rashtriya Swayamsevak Sangh (RSS) and the Bharatiya Janata Party (BJP), and for a moment there is silence on the other side. “Arunji may not like to be written about. He would prefer to keep a low profile,” says an RSS functionary who has known him closely.

His new designation has pushed Kumar, who for about 15 years has played a significant role in the RSS-BJP modus operandi in Jammu and Kashmir, into the spotlight. As he worked behind the scenes, he delved into every aspect of the state—geographical, historical, cultural and constitutional—emerging as one of the Sangh Parivar’s most credible voices on it. But he kept it low-key, expressing his views only in the inner circles of the party and the Sangh, evading the public glare.

It is said that the Jammu Kashmir Study Centre (JKSC), a research body which is his and journalist-turned researcher Ashutosh Bhatnagar’s brainchild, played a key role in amalgamating arguments against Article 370 and 35A, which the Narendra Modi Government abrogated in 2019. Abha Khanna of JKSC, which was established in 2011, recalls her first visit to a conference on Kashmir. Kumar, she says, was sitting right behind and he was one of the most knowledgeable persons on Kashmir. “He goes into every detail, each nook and corner, reading, listening to historians and other experts. At times, he knew constitutional implications better than the legal experts.” Once, during a half-hour drive from one venue to another for a conference in Dharamshala, as Kumar went through a legal document, Khanna asked him if he ever took rest. He smiled and replied that it was exactly what he was doing, resting. His piece of advice to his team has been to always go only by facts, Constitution and the law.

A prant pracharak of Jammu and Kashmir from 2007 to 2011, Delhi-born Kumar played a crucial role in the Amarnath agitation of 2008 against the Congress-led government in the state. According to a senior Sangh functionary, with the kind of knowledge he has on Kashmir, he often gets a high-profile audience from the political class and the Government. What sets him apart is his ability to engage amiably with everyone, presenting arguments in his characteristic composed but confident manner.

In March this year, he was made RSS sah-sarkaryawah (joint general secretary), imperative for becoming the Sangh’s BJP point person, a role that entails coordinating between Nagpur, the Sangh headquarters, and the party in New Delhi.

In July, he was designated sampark adhikari at the congregation of the Akhil Bharatiya Prant Prachar held at Chitrakoot in Madhya Pradesh (MP). Kumar, 57, replaces his senior Krishna Gopal, 66, also an RSS sah-sarkaryawah, who was appointed coordinator in 2014, four months after the Modi Government came to power. Gopal’s predecessor Suresh Soni, who is from MP, had held the post for nearly a decade. In 2013, being the coordinator, he had the task of assuaging senior BJP leader LK Advani, who had resigned after the Goa conclave where Modi, then the Gujarat chief minister, was declared BJP’s campaign committee chief, a precursor to his being named the party’s prime ministerial candidate for the 2014 Lok Sabha elections. But Advani was upset with the way things happened in Goa and Soni’s proactive role in Modi’s elevation. It was finally after RSS chief Mohan Bhagwat’s intervention that Advani withdrew his resignation. Bhagwat created a three-member team comprising Bhaiyyaji Joshi, Krishna Gopal and Dattatreya Hosabale, for coordination, but Soni, who had stood stoically behind Modi’s candidature, was retained as coordinator in the run-up to the polls, a clear indication of the Sangh’s disposition. 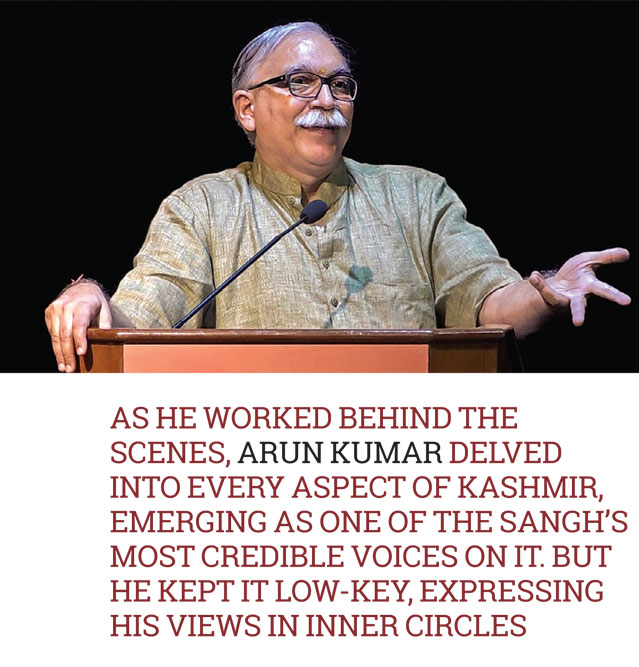 Though RSS prachar pramukh (publicity in-charge) Sunil Ambekar described it as a “routine internal exercise”, Kumar’s appointment is being seen as part of an exercise to harness the Sangh’s energy to provide more muscle to the Modi project. A Nagpur-based RSS functionary says that the Sangh is in no mood to ruffle the feathers and would only buttress the smooth sailing of the Modi regime. Free of the coalition compulsions that the Atal Bihari Vajpayee regime faced, the Modi Government has moved resolutely to address the Sangh Parivar’s core agenda, such as doing away with Article 370 and building the Ram temple in Ayodhya, shrinking the space for confrontation. The Sangh’s open resistance on certain policy issues has also waned from the time of the Vajpayee Government, the only other instance when BJP, the political wing of RSS, has been in power.

“The RSS coordinator’s position has always been an important one and becomes more significant when BJP is in government…The notion that between BJP and RSS one is superior to the other is wrong. They have different functions,” says Walter K Andersen who, along with Sridhar Damle, wrote The RSS: A View to the Inside in 2018. BJP, according to him, respects the Sangh, which has its own network to gather information, as it did before Modi was declared BJP’s prime ministerial candidate and found that he was popular. On the choice of Kumar as coordinator, he says it is not surprising that someone like him, respected in RSS and with good ties to BJP leaders, has been given the job.

THE COORDINATOR’S ROLE was limited to organisational matters. During the Vajpayee era, differences between RSS and the Government over policy matters like Foreign Direct Investment (FDI) in the insurance and defence sectors, patent laws and the World Trade Organization (WTO) treaty came out in the open. The Sangh’s affiliates like the Swadeshi Jagran Manch (SJM), Bharatiya Mazdoor Sangh (BMS) and Bharatiya Kisan Sangh (BKS) founded by fulltime pracharak Dattopant Thengadi, opposed the sale of public sector companies, saying it went against the Sangh’s ‘swadeshi’ mantra. Vajpayee, BJP’s tallest leader, went ahead with the economic reform trajectory. During a national executive meeting of the party in 1998, Vajpayee learnt that there was a move to get the draft of the economic resolution vetted by three leaders, including Sangh ideologue KN Govindacharya, the BJP general secretary who had described him as a mask saying it was Advani who ran the show. Vajpayee took a tough line on policy issues and told Yashwant Sinha, who was the finance minister, that he need not make any changes to his draft resolution under pressure from the Sangh. Despite the face-off on economic reforms, RSS’ liaison man Madan Das Devi, who was a contemporary of Vajpayee and Advani in the Sangh, had refrained from interfering in policy matters. Madan Das was seen as a moderate. He did, however, step in to talk to Vajpayee when, after the 2004 Lok Sabha elections, the former prime minister pinned the blame for BJP’s defeat on Modi in the wake of the 2002 riots in the state, a stand contrary to the one taken by the then RSS chief K Sudarshan. 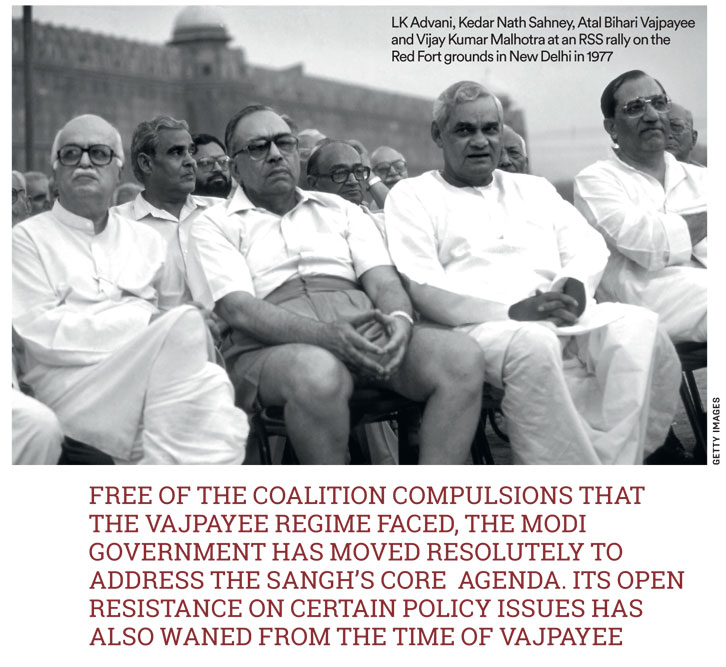 According to a Sangh old timer, in Vajpayee’s time, there was confusion among the average workers of the Sangh, with Sudarshan, Thengadi and Vishva Hindu Parishad (VHP) leader Ashok Singhal criticising the prime minister on different issues. But in the current situation there is clarity that Modi’s word is final. The story of the interface between RSS and its political class, he says, starts from the days of Bhaurao Deoras, younger brother of the third RSS Sarsanghchalak Balasaheb Deoras. He stepped in to coordinate in the late 1970s when the Bharatiya Jana Sangh had merged with the Janata Party. The Jana Sangh was founded in 1951 after RSS felt it needed to have its own political wing rooted in Indian culture, which would be in line with its ideology and markedly different from Congress. Syama Prasad Mookerjee asked MS Golwalkar, who was the Sarsanghchalak, to lend some pracharaks for party work. Among those who moved to the party were Deen Dayal Upadhyaya, Nanaji Deshmukh, Sunder Singh Bhandari, Vajpayee and Advani. BJP was formed in 1980 and in 1984 it faced a humiliating defeat at the hands of Congress in the Lok Sabha elections, winning just two seats. Some within the Sangh blamed it on BJP turning to Gandhian socialism and were of the view that this should be replaced with Upadhyaya’s integral humanism. Though BJP was never in power in all of his tenure as coordinator till 1992, it is said Deoras pushed for diplomatic relations with Israel during PV Narasimha Rao’s tenure as prime minister.

After Bhaurao Deoras died in 1992, Rajendra Singh or Rajju Bhaiya became the next liaison man for a short stint before he took over as Sarsanghchalak in 1994. He endorsed BJP’s projection of Vajpayee as its prime ministerial candidate in 1996. It was during Sudarshan’s tenure as coordinator that BJP came to power for the first time. Sudarshan and Vajpayee did not see eye-to-eye and the strained relationship cast its shadow on the Government. Sudarshan took charge as Sarsanghchalak in 2000 and Madan Das Devi became the coordinator, followed by Soni in 2005.

Soni, who held the coordinator’s post for nearly a decade, had started falling out with the BJP brass. After Modi, who himself has roots in RSS and had become its fulltime worker in 1971, took over as prime minister and Amit Shah as party president, Soni was replaced by Krishna Gopal, an RSS pracharak from Uttar Pradesh (UP). He had coordinated between the Sangh and BJP in UP in the run-up to the 2014 General Election when Shah was in-charge of the state. The party had swept the state winning 71 of the 80 seats. Krishna Gopal had also worked in the Northeast. The work of the affiliates of the Sangh, which provides the party foot soldiers during elections in every state, has added muscle to BJP’s Northeast foray over the last six years with the Modi Government in the saddle in New Delhi.

Along with Kumar’s elevation as joint general secretary in March, RSS—which will be celebrating its centenary in 2025—took other crucial decisions, such as promoting Dattatreya Hosabale, a 66-year-old Kannadiga Brahmin seen as a moderate and a protégée of Madan Das Devi, to the position of sarkaryavah (general secretary). According to an RSS functionary, having been with the Akhil Bharatiya Vidyarthi Parishad (ABVP), the student wing of RSS, several BJP leaders who were with ABVP, including party chief JP Nadda, share a rapport with him.

Under the Modi Government, which has the numerical might to fulfil the long-pending core promises made in BJP’s manifesto, the relationship between the party and RSS, its ideological mentor, altered. The party’s line is seen to be in sync with the Sangh’s and the coordination on organisational matters is effective, says a BJP leader. Initially, in a meticulously crafted strategy to ensure harmony, coordination meetings were held between various ministries and Sangh affiliates, but gradually those stopped. With the new team in place, it could be the beginning of a new equation between the party and the Parivar and further coordination on what remains to be done. Both know BJP is no longer just another outfit in the shadow of the Sangh Parivar—and also to what extent they need each other.