The National Food Atlas: More Than A Mouthful 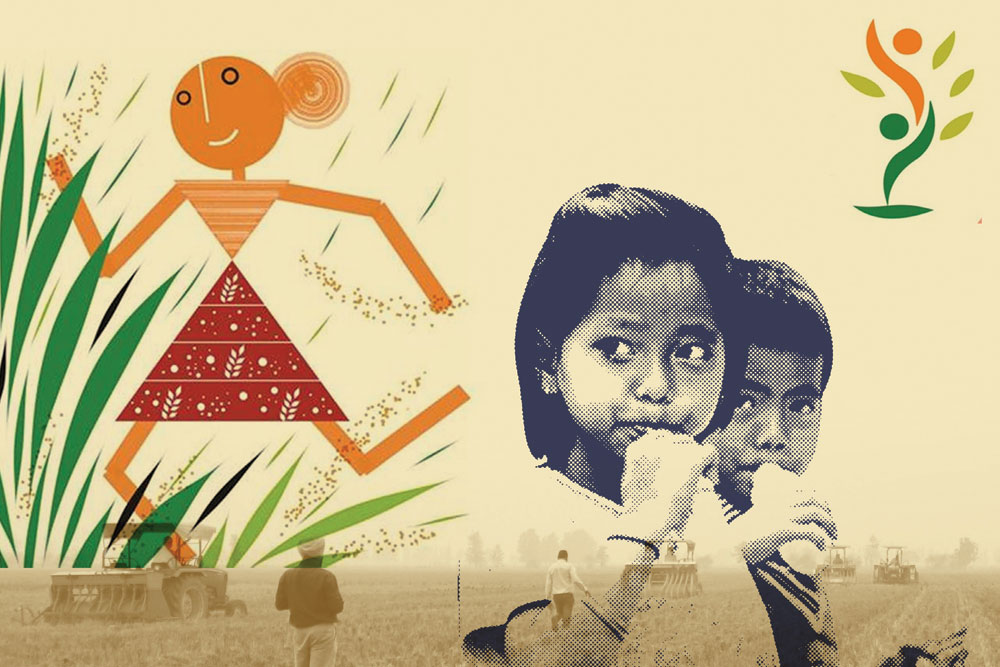 
Is the groundwater in my area sufficient for me to grow rice instead of wheat?

What kind of vegetables was eaten seasonally in my area in the 1960s?

Is there enough data on micronutrients available in the soil in my area to address deficiencies, such as of zinc?

Now imagine one food atlas where all this information and more are available at the click of a button. The Poshan Atlas, a collaborative effort between the Ministry of Women and Child Development, Bill and Melinda Gates Foundation (BMGF), Harvard TH Chan School of Public Health and the Deendayal Research Institute (DRI), set up by Jana Sangh leader Nanaji Deshmukh, will soon be ready to be viewed on smartphones across the country by researchers, policymakers, farmers and consumers. At a time when food has become the subject of political debate, the atlas will restore data to its rightful place of primacy.

India has a double burden of malnutrition and obesity. India fares really poorly when it comes to feeding a diverse diet to children (only one in 10 children get an adequate diet). According to the fourth National Family Health Survey (NFHS) in 2015-2016, only 9.6 per cent children (6-23 months) are fed a minimum acceptable diet. This figure declines to 6.4 per cent for children under two years as per the Comprehensive National Nutrition Survey 2016-2018. Data also shows that 73 per cent of urban Indians are overweight while 5 per cent suffer from morbid obesity.

One solution which often gets highlighted, according to Shweta Khandelwal, Head, Nutrition Research, Public Health Foundation of India, is improving local production and consumption of diverse and healthy food items such as traditionally consumed complex grains, locally grown fresh fruits and vegetables, and nuts. There is one challenge here though: lack of a compendium on agrofood along with environmental attributes of each region for stakeholders to help formulate/implement relevant multi-sectoral policies and programmes.

The Poshan Atlas, which hopes to address this gap, began as a question put by Minister for Women and Child Development Smriti Irani to a group of stakeholders when she took over: can food be used as medicine to address micronutrient deficiency as well as obesity because of high intake of carbohydrates? Can it be used as a preventive rather than a curative? What has now emerged is a Poshan Atlas, the first-ever database in the world to link comprehensive information on what foods are traditionally consumed, what crop varieties are currently grown and, given agro-ecological contexts (such as soil organic carbon content and ground water availability), guidance on how a greater diversity of crops could be encouraged in a particular district to promote dietary diversity and nutrition.


How a nation eats has consequences for policies but it also defines who we are. From policymakers to farmers, the Poshan Atlas will address everyone’s questions

The aim of the Poshan Atlas, says Khandelwal, is to create one of the first open-source databases that link agricultural data at the district level. When fed into an online portal, Poshan Atlas will allow users to visualise key indicators, compare these across various filters (such as among states or years) and see correlations. The portal can be used to generate impact at various administrative and geographical levels by creating a feedback loop between policy and its implementation. There will also be an app, a digital tool to access this database and plan relevant public health and nutrition interventions.

There are global databases which help in knowing what people consume and produce such as FAOSTAT and FoodData Central (by the US Drug Administration). Private US labs are also collating such data. But the Poshan Atlas is unique in that it will incorporate data from multiple sources such as the agricultural surveys by the Ministry of Agriculture under the Improvement of Crop Statistics Scheme; soil health and properties through the Soil Health Card; groundwater table through the Central Ground Water Authority; the traditional cropping patterns since 1966 before the introduction of the Green Revolution through an innovative database for data for 571 districts in 20 states developed by the Tata-Cornell Institute and the International Crops Research Institute for the Semi-Arid Tropics; as well as the Livestock Census conducted by the Department of Animal Husbandry, Dairying and Fisheries.

This data will then, in Poshan Atlas 2.0, be overlaid with household food expenditure data (a proxy for consumption) from National Sample Survey Office (NSSO), malnutrition data from NFHS and micronutrients data from a UNICEF survey. For Poshan Atlas 1.0, as Srivalli Krishnan of BMGF calls it, the biggest issue is creating one single consumable format for all the data, which has varying formats and different years of study. Giving due credit to all the agencies will also be a challenge. DRI’s collaboration focuses on capturing regional cultural practices around foods linked to age seasons and festivals that is expected to be released next year.

The Poshan Atlas will help address all sorts of questions, from policymakers to farmers. Policymakers could understand through the atlas whether they need to address iron deficiency in any particular area in midday meals and take-home rations, which they could do possibly with provision of fortified spinach or millets. Farmers could have queries such as what to grow on their plot for household consumption which could address the micronutrient deficiency given the soil and groundwater conditions. Krishnan who has a doctorate in crop breeding believes the data will ensure transparency, making solutions apolitical.

Poshan Atlas, says Khandelwal, will be unique especially given the huge diversity at a subnational level. She was one of the experts invited for planning sessions in January and February by the Ministry of Women and Child Development and the Harvard India Research Centre. Some of them were later invited to participate in a session with the Minister herself to share their ideas on improving the processes and outcome reporting for this Atlas. 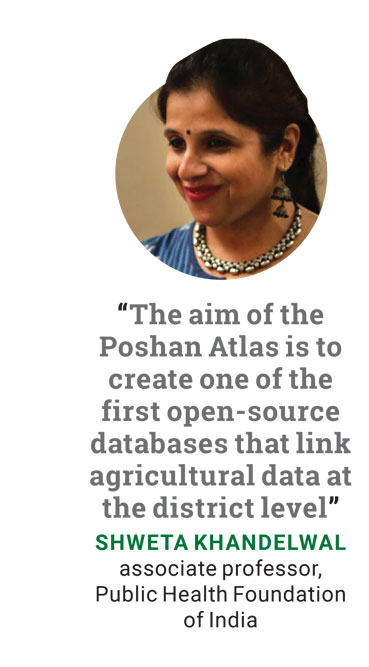 In India there are a few centres of excellence studying how Indians eat like the Tata National Institute of Nutrition Centre and Technical Assistance and Research for Indian Nutrition and Agriculture (TARINA) which is associated with Cornell University and Emory University, among others. The National Institute of Nutrition (NIN) is the result of an MoU signed in 2016 by Tata Trusts with the Indian Council of Medical Research towards establishing a Tata-NIN Centre for Excellence in public health nutrition within the NIN campus in Hyderabad. It is intended to serve as a knowledge hub to inform policy actions for improving nutrition outcomes as well as to compile and analyse data generated under periodical surveys on health and nutrition in the country. TARINA works in Bihar, Odisha and Uttar Pradesh, primarily with NGOs, and integrates nutrition-based objectives into field projects. It works on better market systems for farmers, changing behaviour patterns for better nutrition and diversifying production. But while these efforts are good, they are not enough for a country as vast and disparate as India.

Poshan Atlas has the potential to collate all our food-related information and traditional resources, and help preserve ancient, time-proven, commonsensical knowledge about eating and farming rules that have stood the test of time. Nutritionist Kavita Devgan says it will not just help preserve and bring forth “our way” of eating, suited to our genetic make-up, but will also encourage more research in the field to help make these more mainstream. “Done right it can be a game changer for our country’s healthy quotient, because I have always believed that sticking to our roots is the best way to provide right nutrition to our mind-body-soul,” she adds.

The Atlas is also intended to ensure availability of traditional recipes, benefits of using medicinal herbs and how its intake can prevent disease or help as cure, provide information about nutrition and tips on improving lifestyle. Nutrition education is abysmally low in India, and data poor and scattered. Sometimes consequences of surveys can be the opposite of what is intended. Scholars point to a survey of pregnant and lactating women in rural India last year, where some of these overworked and undernourished women were being advised more work, less food by elders in the family.

Information on a lot of these parameters has been more or less collected by NSSO and NFHS, but the Government would do well to strengthen these organisations and surveys, while also working on the Poshan Atlas. How a nation eats has consequences for policies but it also defines who we are, which makes data collection and interpretation so important especially at a time when what you eat can get you killed. There are several myths about India’s dietary habits, not the least of which is that we are a primarily vegetarian country. Data from NSSO, NFHS and India Human Development Survey indicate that only between 23 per cent and 37 per cent of India is vegetarian. But even within this dataset there is tremendous variation, by gender, caste, religion and region.

“For Poshan Atlas 1.0, the biggest issue is creating one single consumable format for all the data, which has varying formats and different years of study,” says Srivalli Krishnan, senior programme officer, Bill and Melinda Gates Foundation

And by economic class. NSSO data from Household Consumption of Various Goods and Services in India 2011-2012 show the richest 5 per cent of the urban population spent Rs 2,859 per head per month on food, about nine times more than the bottom 5 per cent of the rural population. Even what they spend on differs: the richest 5 per cent spend around three-and-a-half times more on pulses than by the poorest 5 per cent; and on vegetables, they spend around 3.8 times more. On eggs, fish and meat, the multiple is 14.5 times; on milk products, 23.8 times; on fresh fruits, a luxury, 61 times.

With more detailed data available to all, it can only get easier for the Government to ensure Indians, especially those at the bottom of the pyramid eat more and eat better.