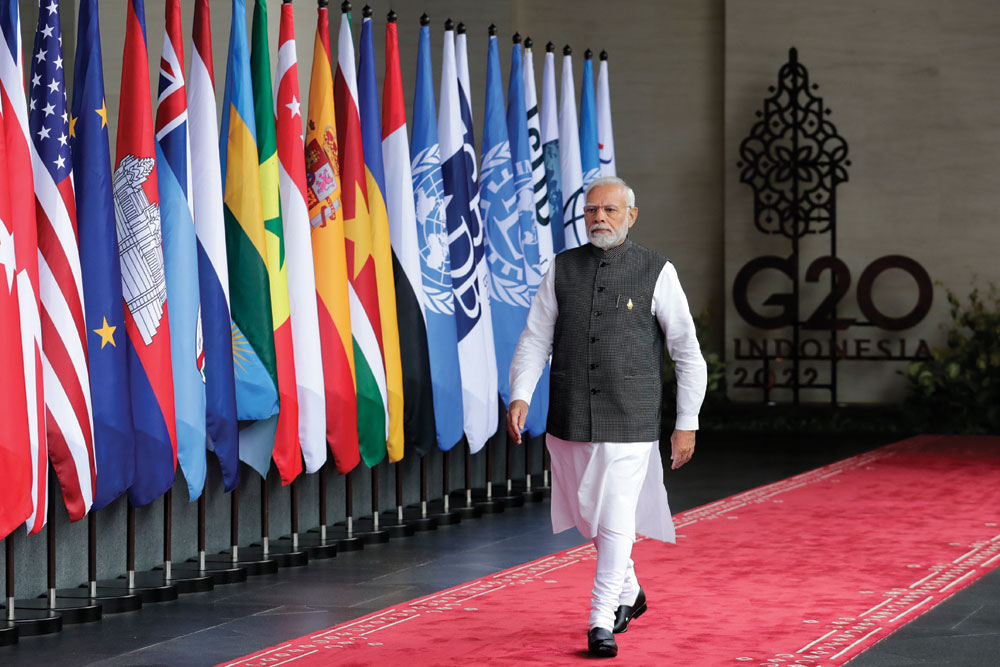 
LOOKED AT IN PURELY instrumental terms, the presidency of the G20 group is nothing more than a transitional arrangement: each of the 20 countries gets a chance to head the group. Then there is the symbolism of a country getting its day in the sun.

There is, however, something special about India’s turn in leading the group. For one, India has a lot to offer in real terms to the world. There is its expertise in digital transformation— from building an identity infrastructure (Aadhaar) to finan­cial inclusion—and its efforts at supplying vital goods like vaccines, medicines, and even government-to-government supply of essential food items like wheat. India’s role as a close partner of Russia—a country at war—and its ability to deliver blunt messages to Russia are also well-known.

India’s concerns about abjuring war for diplomatic solu­tions to conflict and its growing unease at Russia have been reflected in the group’s summit declaration in Bali: “The use or threat of use of nuclear weapons is inadmissible. The peace­ful resolution of conflicts, efforts to address crises, as well as diplomacy and dialogue, are vital. Today’s era must not be of war.” The last line paraphrased what Prime Minister Narendra Modi told Russia’s President Vladimir Putin when they met in Samarkand in Uzbekistan on September 16.

Modi echoed these concerns in his closing remarks in Bali on November 16. He said, “India is taking charge of the G20 at a time when the world is si­multaneously grappling with geopo­litical tensions, economic slowdown, rising food and energy prices, and the long-term ill-effects of the pandemic. At such a time, the world is looking at the G20 with hope. Today, I want to assure you that India’s G20 presidency will be inclusive, ambitious, decisive, and action-oriented.”

This is not mere rhetoric and most world leaders know that.

In the last two years, from the time the Covid-19 pandemic hit the world, India has strove to help as many countries as possible. By the end of 2021, India had supplied Covid-19 vaccines to 94 countries and two UN organisations. In all, India delivered medical and other supplies to more than 150 countries. All this took place at a time when virtually all countries were trying to corner supply chains. India was criticised for banning the export of wheat earlier this year when supplies were short worldwide in the wake of the conflict in Ukraine. But no one bothered to note that government-to-government supplies remained open: it is war-profiteering that it deems impermissible.

India’s record in ensuring an energy transition, includ­ing its commitment to a net zero emission goal by 2070, is also proceeding apace. The number of solar, wind and green hydrogen initiatives being undertaken in India is probably unique for a country at its level of development. India is yet to eliminate extreme poverty, and yet it is on its way to taking a low-carbon intensity path to development.

In this and more, it is easy to berate India. But it ought to be remembered that it is sui generis when seen from the perspec­tive of its population (nearly 1.4 billion) and its low per capita income (roughly $7,333 in Purchasing Power Parity terms; 2021, World Bank). No other country is probably doing as much as India in eliminating global “public bads” like carbon emis­sions and supplying vital goods at the same time. Modi said as much in Bali: “During the pandemic, India ensured the food security of its 1.3 billion citizens. At the same time, foodgrains were also supplied to many countries in need.”


In many ways, the leadership of G20 is the bearing of fruit for India’s efforts at multilateralism since Independence. India’s journey to find its place in the world began at a time when it was desperately poor. In those years, its goal was risk minimisation: it did not want to get caught in the crossfire between the two blocs that dominated the world

India will continue to play this role. It will also push for its own brand of multilateralism and international co­operation. Recently when the theme and the logo for its presidency of G20 were released, there was the—by now routine—domestic carping. It was said that these were nothing but rhetori­cal flourishes. If one looks at India’s record so far, they are hardly that. When Modi concluded his remarks in Bali with “One Earth, One Family, One Future”, he was only indicating his priorities for the next year.

In many ways, the leadership of G20 is bearing of fruit for India’s efforts at multilateralism since Independence. India’s journey to find its place in the world began at a time when it was desperately poor. In those years, its goal was risk minimi­sation: it did not want to get caught in the crossfire between the two blocs that dominated the world. The core of the idea—avoiding risks—remains intact even today, although the approach has been overhauled and bears no resemblance to the ideologically charged Non-Aligned Movement (NAM).

The reasons are not far to seek. Even at the height of its influence, the 120-member group was incomparably poorer than G20. G20 accounts for 85 per cent of global GDP (ac­cording to OECD). Even if one factors out the economic weight of the G7 countries (that are part of G20), the group’s economic heft is significant, accounting for 42 per cent of the world’s GDP. This is expected to increase in the coming years. The sheer gap between economic power and political aims ensured that NAM remained, at best, an overgrown version of a school debating club. G20, in contrast, is about ensuring equilibrium in the world. It combines economic heft with a sufficiently small number of members to make collective action possible at the global level.

This is not an easy task. For one, the warring camps are now located within G20. The US, Russia and China are part of the group. For another, one of the countries—Russia—is in an actual war with another country that has the backing of other group members. But viewed from a different perspective, the warring parties can also be brought to the table by the use of skilful diplomacy.

This is not to underplay the magnitude of the task that con­fronts India. To begin with, India will only play an intermedi­ary role if the two countries (Ukraine and Russia) want that. Else, it will be a quixotic mission. This position has also been criticised in India as a deviation from its principled opposition to third-party mediation. The concern is misplaced.

As matters stand now, Ukraine is unlikely to come to the negotiating table as it has been emboldened to seek a military solution. India’s position, that there be a diplomatic and political solution, has so far gone unappreciated in Ukraine. For the time being, India is unlikely to pursue a conflict-medi­ating role unless it is explicitly asked to do so.

The hallmark of a country aspiring to global leadership is its ability to deliver global public goods and the ability to intervene meaningfully in various conflict situations. From this vantage, India has never sought such leadership even as one of its neighbours desperately seeks to acquire such a role. It is also a feature of the international system that there is no such thing as altruism between countries. India’s limited goal is to ensure that lack of supplies and disorder do not reach a point where the ensuing chaos engulfs it as well. Mitigating climate change and ensuring open supply chains are its own efforts to make it a better world.