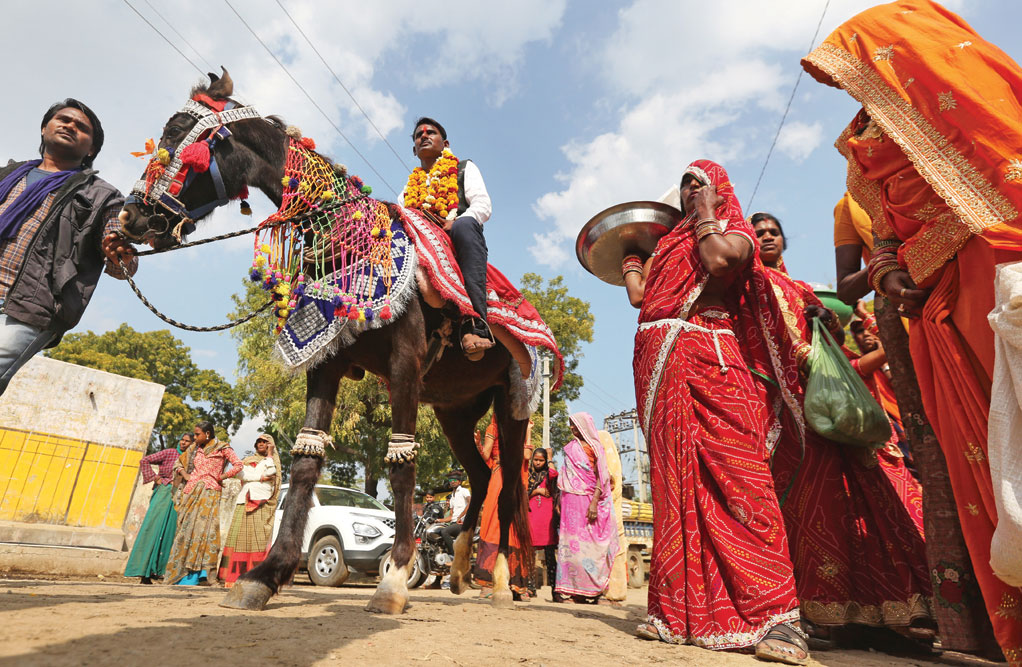 
AT THE ENTRANCE to his modest house, Manoj Bairwa stood in a new shirt and a waistcoat, his henna-painted nails gleaming in the after­noon sun. As local government officials and his relatives hovered around him, he stole glances at the mare standing with her handler nearby. For the occasion, she had been decked up in shiny red gear. In a few minutes, Manoj would have to get on her and take a round of the entire vil­lage. It was happening, finally. But Manoj, 24, who worked as a labourer just like his father, still couldn’t believe it. “Parivartan aa gaya/Change has come,” he whispered, as if he did not want anyone to hear it. The ‘parivartan’ had occurred, but for the Bairwas and other Dalit households in the village, it was hard to believe.

In the Neem Ka Kheda village in Rajast­han’s Bundi district, about 240 kilometres from the state capital Jaipur, the Bairwas are among a handful of Dalits living here for decades. It is a microcosm of Rajasthan itself, where Dalits constitute roughly 17 per cent of the population. Like elsewhere, the village has a majority of households from dominant castes. There is no caste tension, but there are unwritten rules. One of those is an acceptance that no Dalit family will disturb the code of the samaj (society). A Dalit man getting on a mare is one such violation, which has never happened, except once, 32 years ago. And when it did, it created trouble.

That was eight years before Manoj was born. Manoj’s father has four siblings, in­cluding one sister, Kanyabai. In 1990, she was set to get married to one Ram Gopal, who came from a village 35 kms away. The Bairwas had no idea but Gopal had decided to come riding on a mare from the outskirts of their village. As soon as the vil­lagers saw a Dalit man on the mare, he was pulled down and beaten up badly. Some perpetrators were arrested, resulting in bad blood, none of which Dalit families like the Bairwas can afford.

The incident broke the marriage. A hu­miliated Gopal could not come to terms with the beating, and somehow held his wife’s family responsible for it. He returned to his village, leaving behind his wife.

“For 12 years, I waited for him to take me, but he never came,” recalled Kanyabai, as she waited for her nephew to break the code that had cost her dearly. When Go­pal did not return and take her, the Bairwa brothers found another man for their sis­ter. A tailor by profession, Surajmal lives in a village 40 km away. “There was no func­tion; I just came and we got married,” he said. The couple now have five children.

The genesis of what Manoj was about to do lay in a development in the village four months earlier. In October, a young police officer, Jai Yadav, took over as the superintendent of police in Bundi. Shortly afterwards, he came across a news report of a Dalit man’s inability to let the grooms of his three daughters ar­rive on mares to their weddings. Ganesh Lal Meghwal, who ran a provision store, about 500 metres from the Bairwas, urged his soon to be sons-in-law to not arrive on the back of mares. As Yadav investigated, he realised that no one in the village had actually asked him not to do it. “It is just that he remembered what had happened 32 years ago to his neighbour and decided to play it safe,” said Yadav.

YADAV DECIDED TO change this. In the next few weeks, he led an inter­vention by starting a special operation to give confidence to Dalit households. The district police identified about 30 villages where such practices of discrimination had a societal acceptance. The police vis­ited these villages and organised meetings with elders. “We told them that this was not done and that they would have to face the law if they persisted,” said Yadav. In ev­ery village, committees were constituted which included, apart from a few village elders, the station house officer, beat constable, sarpanch, patwari and school principal.


Villagers around here are fairly fearful of what they call “Dhara Teen/Section 3” of the Scheduled Castes and the Scheduled Tribes (Prevention of Atrocities) Act, 1989, in which there is provision for punish­ment for atrocities against a member of the SCs or STs. But that does not always prevent violence against them. In 2020, Rajasthan reported a spike in crime and atrocities against SCs and STs. It had the second highest number of cases of crime against STs. Police records say that in the last 10 years, 76 cases where Dalits were not allowed to ride a mare have been reported. But the actual number would be much higher. In November and De­cember last year, at least two cases were reported from Jaipur district alone where wedding processions of Dalits with the groom on a mare were pelted with stones despite police presence.

This was not lost on Yadav. His team held several meetings, asking people to cooperate with changing customs and empowering Dalit families to celebrate their marriages like everyone else. “We made them stakeholders, telling them that now the entire future of the village was in their hands,” Yadav said.

The first such wedding was solem­nised on January 24 this year in Chadi vil­lage. In the next few days, emboldened by police presence, 14 other marriages took place where Dalit grooms rode on mares without any visible trouble.

On February 9, Manoj Bairwa’s bindori function was organised in the village. It is a pre-wedding ritual where the groom (and even the bride) rides a mare in the form of a procession, stopping finally at the local temple for blessings. On that day, the SHO, Arvind Bharadwaj, landed up at Bairwa’s house along with other po­licemen—all of them in plainclothes— to oversee arrangements. Shortly after noon, a pickup truck arrived, fitted with giant speakers in the rear, playing high-decibel popular Rajasthani songs. As it rolled like a juggernaut, women from the Bairwa household and a few others danced behind it. At the other end of the procession, a garlanded Manoj sat ner­vously on the mare, trying to keep his gaze straight. The procession first passed through the small market on the main road outside the village. Then it turned back and made a round of the entire village. At one point, Kanyabai, decked in her finest clothes, surged ahead and danced with others for a few minutes, emotionally touching her nephew’s forehead several times.

In the Neem Ka Kheda village, there is no caste tension but there are unwritten rules. One of them is an acceptance that no Dalit family will disturb the code of the samaj. A Dalit man getting on a mare is one such violation

From his shop, Ganesh Lal Meghwal looked on as the procession, now playing Daler Mehndi’s ‘Bolo ta ra ra ra’, passed by his house. Many families came to their rooftops, witnessing the procession from there. Towards the end, Yadav along with his deputies and other officials from the civil administration, also joined in. Upon spotting Meghwal’s college-going son, Sitaram Meghwal, Yadav called him and told him that he also needed to get on a mare when the time came. Sitaram smiled and nodded.

Outside a flour mill, Rashilal Sharma and a few others watched silently as Bairwa’s wedding party passed by. He was unhappy about it. “What can one do now that the prashasan [administration] has stepped in,” he said. Sharma, it turned out, had a long list of complaints. The young people among upper castes were not get­ting jobs now, he felt. “Now that you have these people on top, this is what will hap­pen,” he said, looking in the direction of Manoj’s bindori procession. Sharma said that the Bairwas should have resisted this change themselves. “Mana karna chahiye tha.” They should have said no, just like the Meghwals, he said.

It is very unlikely now that those who are against it in the village, like Sharma, will resort to any unlawful action. For his part, Yadav says he will continue his meetings, this time involving even schoolchildren, so that such changes are everlasting. For now, he is aware that some older people like Sharma do not like this change. “Some are getting jittery; they must be even taunt­ing younger men in their family that they have let this happen,” he said. Referring to a term he had heard in a speech recently, he said that only such actions would result in “substantive equality”.

There are already some other encour­aging things happening. A Dalit man who was supposed to get married like Bairwa on February 10, had changed his profile pic­ture on his WhatsApp account to the one in which he is seen on a mare’s back. Below it his status message reads: “Meghwal King”. The police are now receiving applications from Dalit families from several villages across Bundi, asking for their assistance to perform bindori with dignity.

BUT SOME IN Neem Ka Kheda are nervous about this change, especially when they read about such changes being resisted in other parts. The night before Manoj took out his bindori, a similar pro­cession in Jhalawar district was attacked with stones by five members belonging to a dominant caste. A family member of Manoj, who did not want to be named, said that many ofhisneighbourswerenotliking it. “They have agreed to it in public, but in­side their hearts, they detest it,” he said. Per­haps, thisiswhattheirneighbourMeghwal had in mind when he asked his three sons-in-law to not come on the mare. People of all communities buy grocery from his shop and there must have been an awareness that perhaps some would indulge in a so­cial boycott of sorts if he rebelled against the age-old custom. His daughters are already married but the son’s bindori, hopefully, will turn a new chapter in their life.

As Manoj’s bindori procession came to an end, Yadav told villagers to uphold what they had started. “You have removed this stain of 32 years today. Your village has achieved freedom in its true sense,” he said.

After a while, all officials and village elders were gone. Manoj now sat on a plastic chair with a few friends and rela­tives, a little dazed by all the attention he had received. The cameras and most jour­nalists had left, too. Tomorrow, he would bring his bride home. He smiled upon be­ing asked the woman’s name who would become his wife the next day.

“Kareena,” he said. Her parents, in a great act of hope, had named their daugh­ter after the famous actor. But more than that perhaps, she will now be known as the bride whose groom rode a mare for the first time in Neem Ka Kheda.