×
strapped to the song

Sunidhi Chauhan is the nearest India has to a rock star. She tells us how performing on stage gives her the freedom to cut to loose 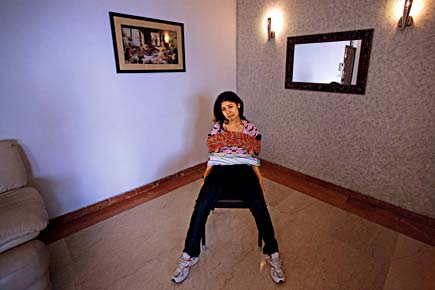 Sunidhi Chauhan is the nearest India has to a rock star. She tells us what singing and the stage mean to her


I sing because that is when I feel the best. That feeling has a lot to do with forgetting who I am. When I am singing, I am not the 26-year-old Sunidhi Chauhan, born in Delhi. Not the child who visited Mumbai to see the sea and stayed on forever, or the teen who, at 13, won the national award in the TV show Meri Awaz Suno.

But there is a difference between singing and performing. When you are recording a song, for instance, you need to concentrate so much on getting it right—the tone, the tenor, the pitch, the feel, the story situation, the star who will lip-sync my words. You have to get all of it right. A song recording takes about 90 minutes. And these 90 minutes are how you are going to be judged. I want to be judged the best. And so I give all that I have got to the song. The energy for this has to come from me. It is like focusing all the rays of your talent to one spot: your throat.

But when you are performing on a stage, which I often do, it’s all high octane. I can do what I want on the stage. In the first few seconds on the stage, I can tell if the audience’s energy is flowing into me. The way they respond to my name, the guys in the back who are ready to rock and dance, the hands going up in the air, people shouting my name, I know they want to see me let go.

And I do. I improvise the songs, move like my limbs are motorised, race through breaks, work the crowd. If the crowd is right, then nothing I do will go wrong. It is a kind of freedom. You see, I am free to be a medium for my talent.

The exhilaration I feel on the stage, the freedom to be myself, I get that from driving my car too. I am really a fast driver. I drive a Honda City and on the highway, I touch 220-240, and I feel like Michael Schumacher. I don’t look like him, I know, but I feel like him. And when I feel like that, I have noticed nobody sits with me in the front.

I guess I enjoy my performance so much because there is an element of power here. A great performance on stage actually means dominating the mindspace of thousands of people. It means that for the time they see me sing and dance, they are with me in the zone, they are not thinking or worrying, they have no fear. I am controlling their emotions. And the song has become a shared transport to an exciting world.

Sometimes, the crowd is dull. They slouch in their chairs and you can feel the ebbing energy of the place. But even then, I manage to have fun with the musicians. We perform our in-house jokes and generally have a laugh. But such occasions when the magic doesn’t work are rare.
I can sit and sing too. But not lying down! But it’s best when I am on my feet and moving. Sometimes I wonder how Lataji (Lata Mangeshkar) or Chitraji (South Indian singer) sing without batting an eyelid. From a distance you can’t even make out they are singing. That’s just great. And how well they sing. Not one flat or faltering note.

To my mind, Lataji is a goddess. There is a purity about Lataji’s voice which makes it nearly a religious experience. It works on you like the peace welling up in a quiet temple. The other day, I was at a marriage reception, and there was Lataji’s voice singing O Sajnaa… over the speakers, and I placed my fork and knife on the plate and listened to it. I couldn’t eat with that song in the background.

I am, I think, very close to her; she has been both an inspiration and an encouragement. I could pick up the phone and talk to her any time I want to. But I am so awestruck by the idea of Lataji that I rarely gather the courage to do it.

Actually, I have miles to go. Look at the impact of an Alicia Keys or Mariah Carey or Whitney Houston as they storm the stage. That’s where I want to be, in that league. I am training myself for it. Presentation, breath control, choreography, the various departments of delights.

I won’t say I am the only female rock star in India. You are saying it.